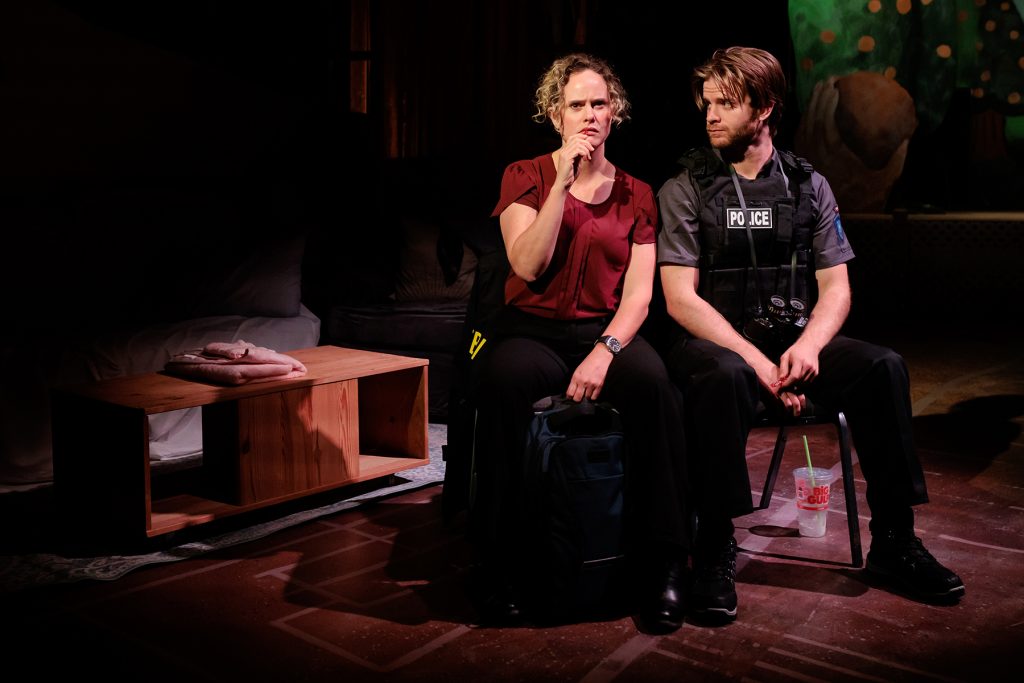 As depicted in “The Locusts,” life in Vero Beach, Florida is so nasty and brutish that it almost seems a not-totally-bad thing that it’s short, too, at least for the victims of the serial killer stalking the town’s young girls. What isn’t short is the running time of Jennifer Rumberger’s world-premiere play, helmed by John Gawlik, which clocks in at two-and-a-quarter hours, including that rarity these days, an intermission. Billed as a “chilling thriller,” the play neither chills nor thrills, but rather crawls and stalls as it lumbers fitfully toward a frustratingly enigmatic conclusion.

The hunt for the play’s increasingly bold and depraved murderer is led by FBI profiler Ella, who has come down from Washington, D.C. to her hometown in the Sunshine State, which is here presented–thanks to Trey Brazeal’s and Stefanie M. Senior’s nifty lighting and sound design, respectively—as a shadowy film noir hellhole, full of storm and stress and not much else. Ella is reminiscent of Clarice Starling, the FBI agent in “The Silence of the Lambs,” except that unlike Clarice, Ella exhibits little curiosity about the psycho killer haunting her old stomping grounds and never really engages with the crimes, the community (beyond a vague assertion at the beginning that “there’s something wrong here”) or her temporary colleagues, a battle-hardened local police chief named Layla (Jennifer Glasse) and a callow cop called Robbie (Patrick Weber). Instead, Ella dwells obsessively on her own traumatized past, as does her sad-sack sister Maisie (Brittany Burch), with whom Ella is staying. Even their dementia-ridden grandmother (Renee Lockett) gets into the act, narrating an incident of sexual harassment from many decades ago, and revealing in her telling a level of vindictive sadism rivaling that of the town’s serial predator. Maisie’s teenaged daughter Olive (Mariah Sydnei Gordon) is heir to the family’s legacy of woe, and the monotonously creepy and downbeat bedtime stories she tells her great-grandmother suggest she is a chip off the old block. 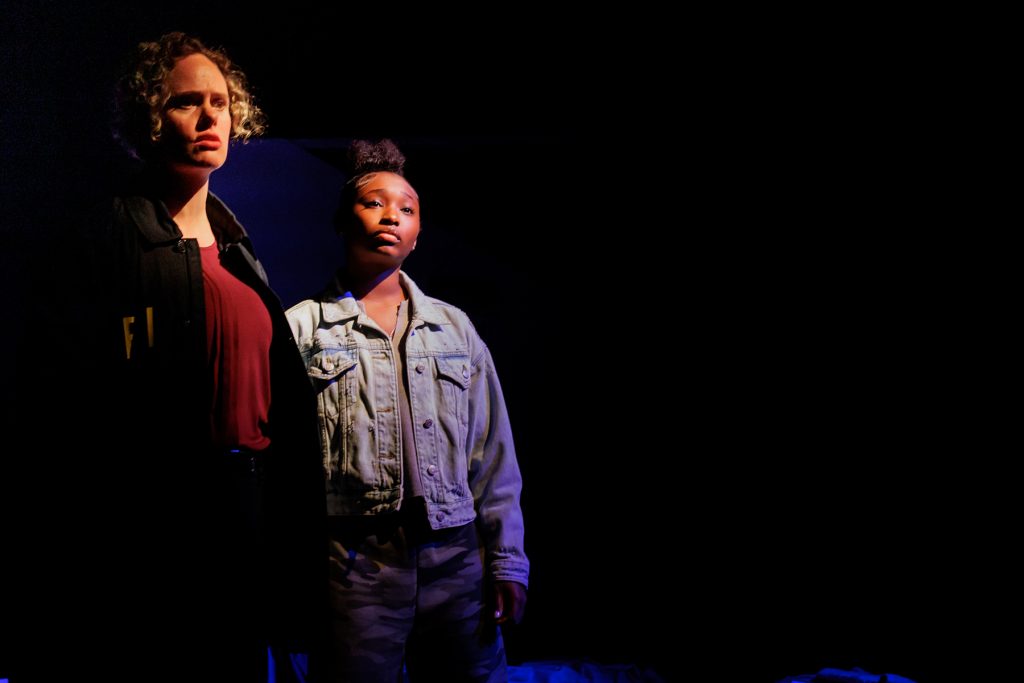 Cyd Blakewell does her best as Ella, an angsty, one-note character who mostly floats above the action, such as there is. The other cast members are also competent but less than compelling as they whine and fret their way through the talky, meandering storyline. The exception is Weber as the feckless and eager young patrolman Robbie. He lends a hint of charm and vivacity to his character, the only one not trapped in the pandemic of depression that engulfs the world of this play.

And what a bleak world it is, here in locust land. Life is a slough of despond, men are at best disappointments and at worst bloodthirsty ghouls (they are the title locusts, a biblical plague upon the landscape), and women and girls are their helpless victims. It’s a nightmare universe without joy, connection or hope—and without a hint of the rhythms and feel of lived existence. Gawlik’s unfocused, slo-mo direction accentuates the plot’s going-nowhere quality, its intensity of futility and entropy.

Oddly, we never learn much about the killer or find out what impels him toward his abominable crimes. Perhaps the playwright’s point is that all such malefactors are the same—they are all men, after all—and that individual rapists and murderers, even fictional ones, are not deserving of attention or scrutiny. But interesting plays are built upon complex and layered characterizations, even (or rather especially) of the bad guys, and not simplified abstractions. By eliminating the killer as a character, the writer has diminished the potential for conflict and drama, turning too many scenes into repetitive, generic screeds against male violence.

What can one say about a play whose climax rides upon a garbled and inaudible cell-phone call, rendering the final scene all but incomprehensible? That structural sloppiness does not equal rich ambiguity, just as endless carping does not make for gripping characters, and animosity against men—as opposed to patriarchal social structures—is not real politics. A psychological thriller possessing neither psychology nor suspense is no recipe for success. The true mystery here is why the usually competent brain trust at Gift Theatre gave their approval to a script as unfinished and just plain buggy as “The Locusts.” (Hugh Iglarsh)