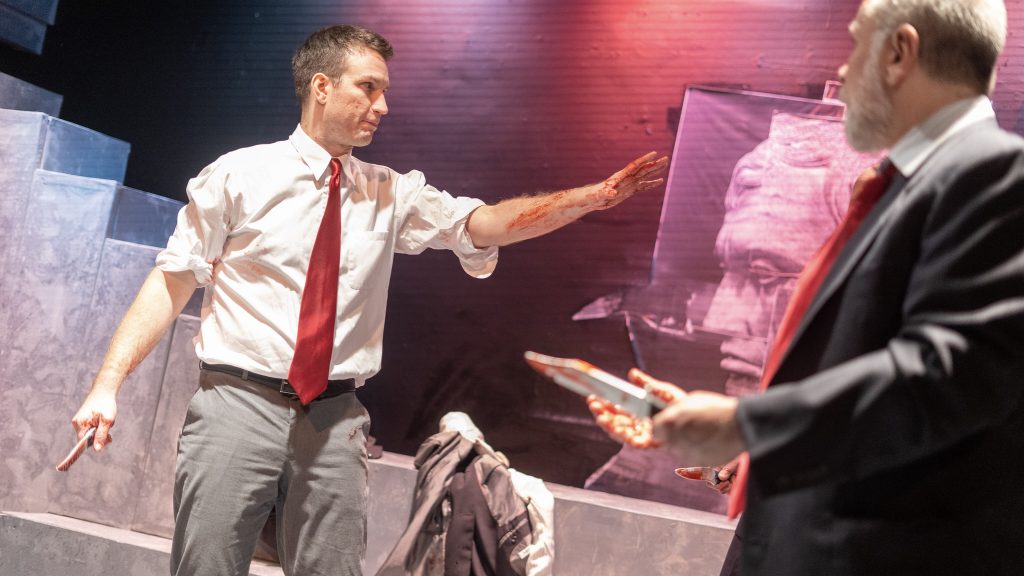 “Without the benefit of toga.” That’s how Orson Welles described the Mercury Theater’s radically reconceived production of Shakespeare’s “Julius Caesar” that took New York and the theater world by storm eighty-five years ago, in November 1937. Welles starred as Brutus, the honorable “liberal” who is talked into the plot to kill Caesar by conspirators who appeal to Brutus’ principle. Under Welles’ direction, the stage Romans were famously dressed as black-suited fascists, the kind that had seized power in Europe and were marching in the streets of the United States, including Chicago. Welles did away with sets, too, and used clever lighting to invoke the klieg lights of Hitler’s Nuremberg rallies. In its production of “Julius Caesar,” the Invictus Theatre, and director Charles Askenaizer who plays Brutus, also strip away the togas and port the action to the United States and set the play around the events of the January 6 assault on the U.S. Capitol and Donald Trump’s attempts to hold onto power. Instead of the sleekly chilling fascist garb, the show opens with a mob in frumpy working-class garb and scarlet ballcaps, a kind of “redical chic” meant to be just as chilling. 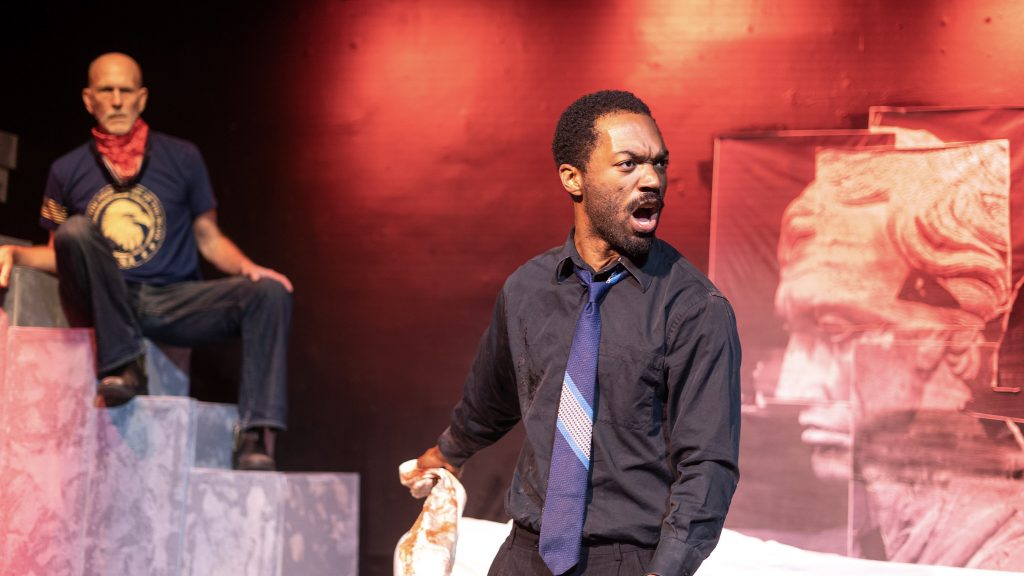 Director Askenaizer—who is the company’s founder and artistic director—proves again that Invictus commands its small stage with strong, energetic performances and with emotionally potent productions. Everyone in the cast of this “Caesar” doubles in roles big and small, sometimes appearing as their own enemies. The action is nevertheless easy to track, largely because the cast handles the poetry of the play with clarity and conviction. That also helps keep the tension in the tragedy taut. The theater has only a few rows of seats and the chance to experience such fine interpretations in close quarters is a gripping treat. Two of the play’s most compelling scenes—Marc Anthony’s oration delivered by Mikha’el Amin and the famous argument between Cassius, played by Daniel Houle, and Brutus—are knockouts.

It is certainly too much to ask that the production rise to the level that one imagines Welles and Mercury achieved. Or cause the sensation that reviewers and audiences of that time believed the Mercury had stirred. (YouTube, by the way, has audio recordings of that historic production.) The periods, settings and costuming of classic works have become so infinitely reconfigurable. Nevertheless, it is hard to see just what Askenaizer and company want the audience to make of their transposition of the play to our time and place. The production is dotted with added dialogue taken from our day’s news. We even hear Donald Trump’s voice. The analogy of Caesar’s Rome to the American scene could never be a tidy one and here it seems so forced that it is confusing. I tried the mental experiment of imagining the play through the eyes of audiences on opposite sides of the American political divide and it is hard to see which side should be more cheered or offended. Is populist, grandiose Caesar a firmer analogue for Trump then Brutus and his clique, who resort to violence to keep their power? The Invictus production may be pushing its analogy too far to fully realize the moral and political tensions that are central to the play.

When Welles introduced the radio version of his production in 1938, he stated: “It was timely… 1650 years after Caesar’s murder, when Shakespeare wrote it and it is timely today. Shakespeare’s great political tragedy about the death of a dictator, which is also the personal tragedy of a great liberal, exists in all times without identification or special reference to any time.” Welles monkeyed with the staging but left the words of the play intact. Shakespeare’s script in the hands of a strong cast—like that on the Invictus stage—gives us all we need to feel the parallels between the anguish of the past and today.