City Lit Theater’s forty-second season kicks off with the world premiere of “The Mark of Kane.” Written by Mark Pracht, “The Mark of Kane” is the first offering of his “The Four-Color Trilogy.” Stripped to its core, “Mark of Kane” is a darkly woven origin tale leading its viewers well past the safe kitschy territory of the Bat Cave. Unwinding in a series of flashbacks, each scene is neatly framed like a comic-book cel. In this manner we slowly learn about Batman’s two principal creators: Bob Kane (Josh Zagoren) and Bill Finger (Todd Wojcik). From the onset it is clear that Kane, a fast-moving salesman with perhaps more confidence than talent, is fated to receive the credit, fame and money for Batman’s success (with his name alone on the byline). Finger, despite being responsible for nearly every aspect of Batman’s character, is subsequently relegated to being just another ghost writer in Bob Kane’s sprawling comic-book empire. Initially content with this arrangement, Finger revels in his near total creative control over Batman’s direction. Eventually, though, the lack of recognition for his work as well as the limited payment he receives eat away at his sense of worth. 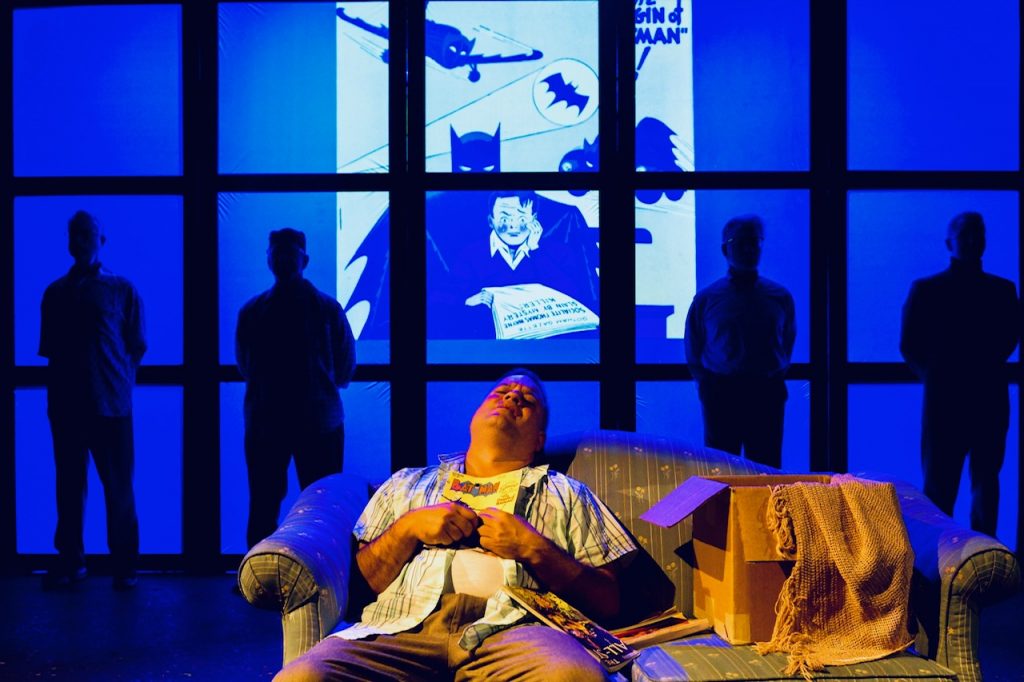 A key part of this production is the question of why Bob Kane and not Bill Finger is forever linked to Batman. One likely reason is their respective childhoods, which are presented here in two neatly conceived back-to-back scenes. The Finger household is depicted as utterly desolate and dominated by a bitter alcoholic father and belittling wife. Finger appears absolutely defeated and seeks solace in the world of pulp fiction (whose plots he later mines for his comic-book creations). Following this, we see the Kane household where he is spoiled rotten and told that he deserves everything the world has to offer including, apparently, sole credit for breathing life into the Dark Knight.

Along the way we also meet many of the colorful legends of the comic-book world such as Arnold Drake (Adam Bitterman), Shelly Moldoff (David Valenta), Jim Steranko (Michael Sherwin) and Jerry Robinson (Lee Kanne). Perfectly cast in their roles, the character’s fanciful stories not only lighten the mood but also provide critical insight into the frantic publishing world of the late 1930s/early 1940s. Accomplished kibitzers as well, the three actors perfectly recreate the camaraderie earned when collaborating deep into the night. It is in this world where Bill Finger earned his true success: the undying respect of his peers. It is insights like these, wonderfully achieved through an exceptionally well-executed production, that makes this recommended for more than just comic-book lovers.