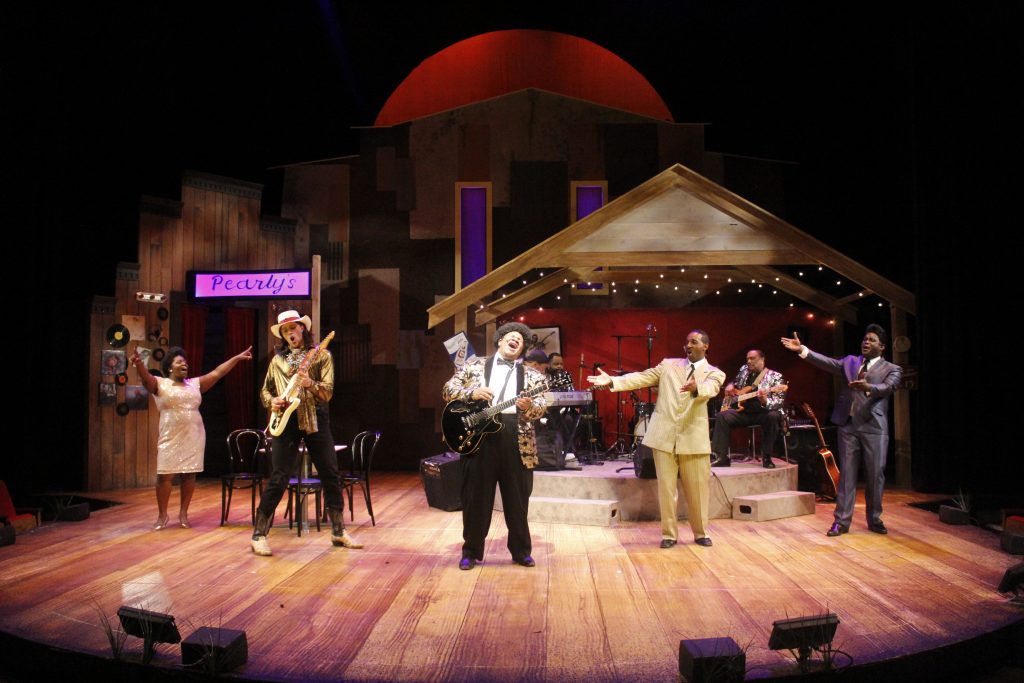 Twenty-four songs in ninety minutes, all stirringly sung, played and arranged. That’s Black Ensemble Theater for you. The current pastiche, “Blue Heaven,” recreates the music of blues legends. The setting is a blues club at Heaven’s Pearly Gates. Several big-time but dead blues singing stars have found enough forgiveness for their sins to enter Paradise, where they spend their time teasing each other, recapping their lives and singing the tunes that were born of their hard times. When a new star, B.B. King, shows up, he’s blocked at the gates. To get in he must find a way to forgive himself for his own wayward behavior, which we learn in the show’s one truly emotional bit of drama, was more a sin of neglect than commission. One by one, the other stars set an example for King, with song. It’s the kind of uplifting biographical tableau that is the hallmark of the BET brand of show. Daryl D. Brooks wrote and directed “Blue Heaven,” though it is very much in the edifying and ultimately upbeat spirit of many Jackie Taylor shows at the company, a number of which Brooks worked on.

Taking our cue from the show, let’s go around the horn. Aaron Reese Boseman as B.B. King convincingly evokes King’s vocal style and physical presence. Howlin’ Wolf is played by Lyle Miller, who learned to blow a mean harmonica just for the show. Muddy Waters is taken on by Dwight Neal who again nails a role he took on with another BET show a decade ago. Big Momma Thornton is beautifully sung and with the power of a colliery whistle by Miciah Lathan. Stevie Ray Vaughan is played by guitar phenom Billy Rude, whose licks are breathtaking. That’s saying something, because the wonderful guitar work of Oscar Brown, Jr. in the show’s band had already taken everyone’s breath even before Rude took the stage.

BET regulars will recognize most of the performers, some of whom have appeared with the company for more than twenty years. Miller’s been in fifty shows. Rude and Boseman are the new cats on the block and if they turn out for the next twenty years of shows, BET will continue to give us its brand of Heaven. The shows may often seem overly sweet and preachy. Then again, Paradise may be just that. And there the music is probably more interesting than the conversation, anyway.