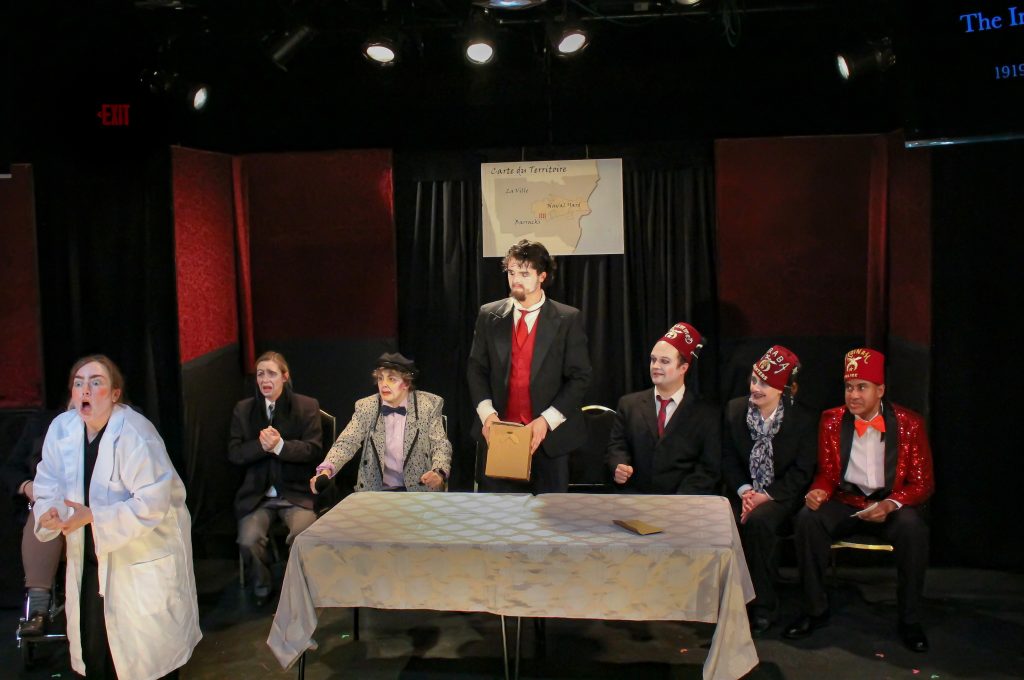 Yes, there’s a touch of rust after almost three years of pandemic-induced limited activity, and the show at times comes off more as a scrimmage than a real game. Still in all, it’s great to welcome back to the live stage The Conspirators, Chicago’s foremost (and, sadly, only) full-time practitioners of anarchic, subversive, unashamedly partisan, take-no-prisoners satire. Based on their latest comic revue—the longwindedly titled “The Conspirators’ 125th Anniversary Jubilee, Featuring ‘The Ineptidemic’”—the troupe remains the most pointed and most playful bunch in town.

The two-and-a-quarter-hour-long show (including intermission) is a scattershot medley of sketches and songs. Some are excerpted from the company’s earlier productions—such as “The Resistible Rise of Herr Helmut Drumpf”; “The Deck Chairs, or Make the Titanic Great Again”; and “Accidental Death of a Black Motorist”—while others are new, or at least hitherto unpresented. They’re all wrapped around the evening’s centerpiece, “The Ineptidemic,” an updated version of a forgotten play that turns out to be a major find. (More on it later.) As a whole, “Jubilee” has a hit-or-miss quality, but when the show hits, it hits hard.

Of course, the “125th Anniversary” tag is a MAGA-scale fabulation, as the itinerant company’s first show dates back no further than 2017. But the device permits resident playwright and funnyman Sid Feldman (who co-founded the group, along with “Jubilee” director Wm. Bullion) to dive into the past and insert The Conspirators’ manic energy and skewed and skewering approach into an array of characters and events. These include a feminized Sherlock (make that “Shirley”) Holmes, a glum post-Hiroshima Harry Truman, and the dysfunctional youth of a certain “Herr Drumpf” as he begins his fateful pursuit of power and infamy.

The musical bits—including a cartoonishly chaotic drag rendition of Maurice Chevalier’s “Louise” and a rousing closer in which the cast belts out “Everybody’s Somebody’s Fool” while a crazed Trump figure tosses rolls of paper towels into the seats—tend to work better than the often underwritten dramatic sketches. And the play’s framing device—featuring an unctuous awards show MC wearing a sparkly red metallic jacket that may well be visible from outer space—falls flat, a victim of lapses of timing and characterization that suggest lack of rehearsal time. But aided by a savvy, cohesive cast, and the ace rim-tapping skills of percussionist Tom Jasek (who shares duties with Sean McGill), director Bullion mostly keeps the pacing quick, the touch light, and the humor on target and under control. 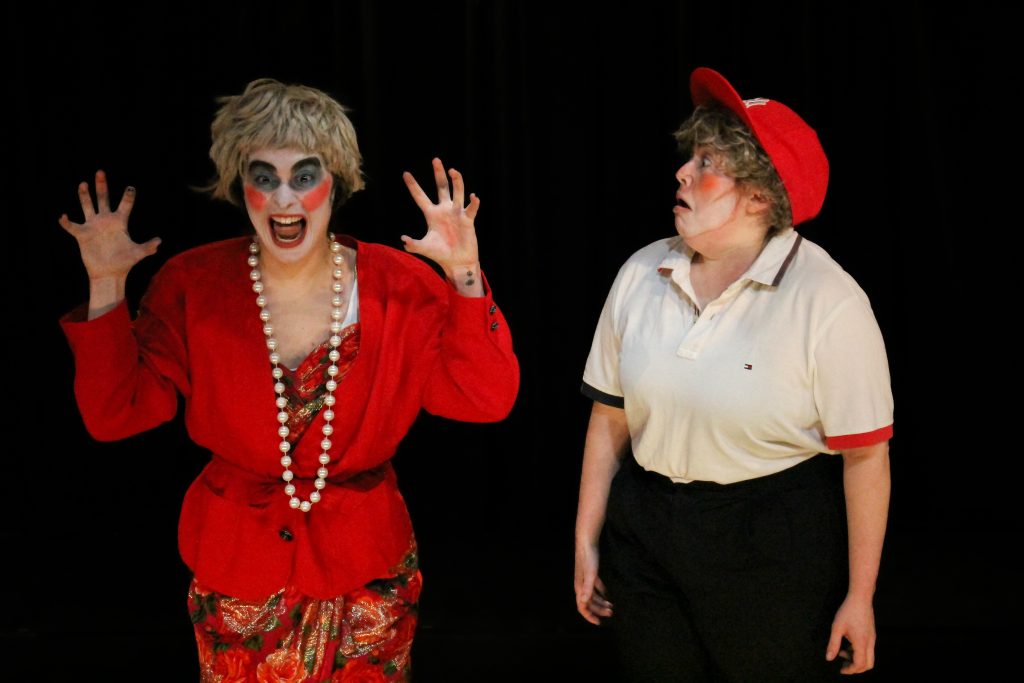 The show affords a fine introduction to what The Conspirators call “The Style,” the group’s robotically jerky, audience-facing, hyperbolic acting method that stirs together Chinese opera, German Expressionism, Monty Python and Betty Boop. It’s an ideal vehicle for parody and burlesque. We see it used to full comic effect in “The Ineptidemic,” a well-executed adaptation of “The Epidemic,” an obscure Belle Epoque political farce by gadfly French writer Octave Mirbeau. The play-within-a-play concerns the grotesquely greedy, selfish and mean-spirited trustees of an unnamed French town. Typhoid fever has broken out at a local naval base, and the city council meeting descends into an all-too-familiar carnival of science-bashing (“Germ theory is a mere hypothesis, never justified by experiment!”) and swinish indifference (“[The sailors] expect to die, don’t they? It’s what they’re for!”), all presented as a Swiftian indictment of bourgeois complacency. I’m not sure which lines in the sketch were written by Mirbeau and which by Feldman. But I do know that this darkly funny, enragingly relevant and surprisingly poetic playlet is the best work of theater I’ve seen to date on the COVID situation, examining the pandemic from a witheringly unsentimental class-conflict angle.

At a time when too much local stage work is technically proficient but conceptually vacuous, “Jubilee” shows what micro-budget theater is capable of when driven by imagination and vision. In “Jubilee,” the actors themselves joke about the show’s patched-together set, folding card-table prop, and thrift-shop costumes, including some gloriously ludicrous Shriner caps. But in this cabaret context, the more primitive the production values, the funnier and stronger the effect. There’s something jarring about seeing luxuriously costumed stars on a splendidly lifelike set calling for proletarian revolution, “Les Misérables”-style. The radical message comes through loud and clear, as when we see a chorus line of grimacing, pancake-daubed, garishly made-up ghouls singing a disturbing version of “Yankee Doodle Dandy” in a minor key. Using the simplest of theatrical means, the brief scene makes us understand that something subtle but deep has happened to our world, and that what once felt normal and wholesome now seems anything but.

There’s an old Yiddish saying that truth never dies, but it lives a pauper. The same can be said of satire, which doesn’t thrive in our earnest, pragmatic culture, but never quite disappears, either. It serves as an underground reservoir of repressed truths and dangerous insights. As I write this on midterm election day, it’s clear that our confused and blinkered society could use a dose of brutally honest self-reflection, and I hope that The Conspirators continue to provide it. (Hugh Iglarsh)

The Conspirators at Otherworld Theatre, 3914 North Clark, conspirewithus.org, $25 with discounts available. Through November 19.