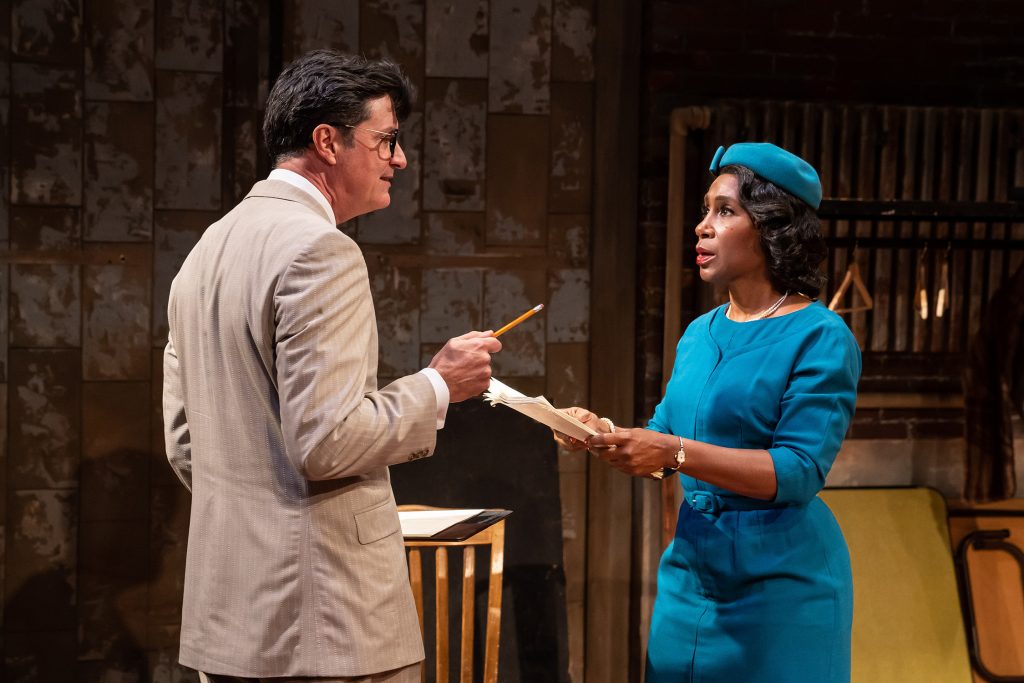 In “The King,” Eugene Jarecki’s documentary about Elvis Presley, a Black activist interviewed by the filmmaker observes that America “inflicts pain on Black people, denies it inflicts the pain, then benefits from the soulful cry that arises from the pain.”

That pretty much sums up Alice Childress’ “Trouble in Mind,” her 1955 off-Broadway play, which is presented at TimeLine in a polished and thought-provoking but dramatically inert production directed by Ron OJ Parson. “Trouble” is an important work by an accomplished writer that boasts an interesting production history. By all rights, it should have been the first non-musical by a Black woman to play on Broadway—eventually, that honor went to Lorraine Hansberry’s “Raisin in the Sun” in 1959—but that opening never happened during Childress’ lifetime, for reasons of racial politics adumbrated within the play itself. As a serious drama that reveals much about a crucial moment in history (the early Civil Rights movement), the play is right in TimeLine’s wheelhouse. Unfortunately, the play succeeds more intellectually than emotionally, capturing the social currents of an era and raising still-pertinent questions about identity and representation, without fully drawing us into the story or fleshing out its numerous characters.

“Trouble” is a backstage work set during the rehearsal period for a new and controversial race-themed play, written by a white man, that’s set to open on Broadway. In this revised version of the play (prepared for the planned Broadway debut that would occur decades later), the year is 1957. It’s the time of the Little Rock, Arkansas public school integration showdown, which ended only after National Guard troops were called, sparking something close to a second civil war. The strife in the outer world bleeds through the walls of the theater (designed by Caitlin McLeod as a lifelike blend of grunge and glamour), creating an ever-mounting tension between Al, the show’s domineering director, and the mostly Black cast, notably veteran actress Wiletta, who has worked previously—and not entirely happily—with Al in Hollywood. In the end, the rehearsal breaks wide open, revealing the racist attitudes and fundamental dishonesty underlying the whole shoddy, pseudo-liberal enterprise, which aims in classic showbiz fashion not so much to heal the cracks in society as to package and peddle them to paying customers.

The play is clearly a reflection of Childress’ early years as an actress, condemned by skin color to playing endless maid parts. Wiletta, who seems to be the author’s stand-in, conveys all the frustration of an artist thrust into parts beneath her talents and dignity. But there is such a thing as a writer sticking too closely to her own experience. Lacking reflective distance, the play fails to dig deeply into Wiletta. Like all the characters—with the possible exception of Al, Wiletta’s antagonist–Wiletta remains more of a type, a social construct, than a rounded human being.

Shariba Rivers, who plays Wiletta, is a superb actress, one of Chicago’s best, who radiates strength and intellect. But she’s limited by the script, which provides her with no life beyond the theater walls, and little history. We never learn what motivates her switch from the opportunist philosophy she shares with a younger colleague at the beginning of the play (“Remember, white folks can’t stand an unhappy Negro”) to her later defiance of Al, which could potentially end her career.

Tim Decker is terrific as Al, the shrewd and energetic director, who is also bullying, abusive, self-pitying and exploitive–all in all, a nasty piece of work. Neither a visionary artist nor a pure showbiz huckster, Al inhabits an uncomfortable middle ground, teasing the audience with edgy subject matter (in this case, lynching in the Jim Crow South), but not taking them to genuinely uncomfortable places (like the thought of Black self-defense against white violence).

Decker moves like a juiced-up athlete and talks like a salesman on commission, as he prods his cast into delivering more nakedly emotional, less-contrived line readings and responses to the script’s demeaning situations. But in pushing his Black actors toward greater truthfulness, while forbidding them from openly expressing the anger they actually feel, Al brings out their latent rage. In the play’s most harrowing moment, one of the actors (played by Kenneth D. Johnson) movingly recalls a lynching he witnessed as a child. Suddenly, nobody is acting anymore, as the rehearsal of the silly, sentimental play slams against the wall of real life. Defending the script against Wiletta’s attack, Al explains that “The American public doesn’t want to see you the way you want to be seen.” His audience is willing to sympathize with poor, helpless African Americans, but only as long as they refuse to fight back. And Al himself can deal with Blacks only as long as they accept his power over them.

The other cast members—Vincent Jordan as a youthful Black actor learning the ropes; Tarina J. Bradshaw as a harder-edged, bling-oriented stage veteran; Charles Stransky as the aging Irish stagehand whom Al treats like a bad dog; Jordan Ashley Grier, as a button-cute, Yale-educated ingénue in her first professional show; Adam Shalzi as Al’s put-upon assistant and Guy Van Swearingen as an old thespian too ground down by a lifetime of bad scripts to even care anymore—are universally solid. They’re well-served by Christine Pascual’s period-perfect costumes, Brandon Wardell’s sensitive lighting and Christopher Kriz’s subtly modulated sound design and jazz-inflected musical choices.

For all of its many strengths, the show never quite takes off. It’s not the fault of director Parson, who elicits solid, thought-through performances from his well-cast ensemble. Rather, it’s the script itself, which is curiously irresolute. “Trouble” bears comparison to August Wilson’s “Ma Rainey’s Black Bottom,” another backstage play about the pressures and dilemmas facing Black artists under white supremacy. But whereas “Ma Rainey” is tragic in its depiction of a white promoter turning Black musicians against each other and themselves, “Trouble in Mind” remains more of a high-level melodrama, its impact blunted by a weak ending, which is neither happy nor unhappy, but simply flat.

There’s no shortage of conflict in “Trouble” between Wiletta and Al, but it’s a sterile conflict, leading nowhere other than a muffled resignation, as the status quo is reconfirmed and the characters drift away, apparently unchanged by what they’ve seen. I’m left with the sad thought that, even had “Trouble in Mind” received its expected Broadway debut back in the 1950s, it might well have been less than a success, ending as it does with more of a whimper than a bang. (Hugh Iglarsh)