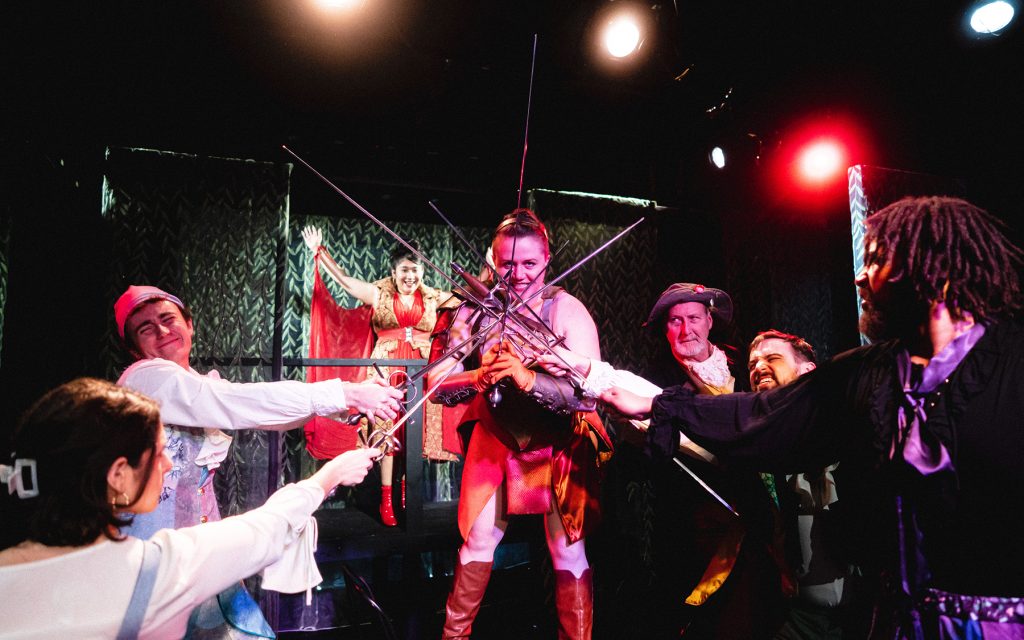 In the nineteenth century, Shakespearean burlesques were in vogue, with productions of “Hamlet the Dainty” and “Julius Sneezer” holding a mirror to working-class conflict and the absurdities of human nature. That spirit of proletariat satire lives on.

“Malapert Love” is an original play written in the Elizabethan style by Siah Berlatsky. Berlatsky mentions in the program that the work is fundamentally a rebellion against heteronormative society. Director Julian Hester notes that the challenge is in the marriage of Shakespearean tropes with a modern twist, creating something “entirely fresh, and unapologetically non-conforming.”

Wealthy Lord Montoya (Grant Carriker) seeks to expand his estate through marriage to the Lady Gabriella (Karla Corona). His plan is to woo her with an original sonnet. There’s one problem: his writing stinks! 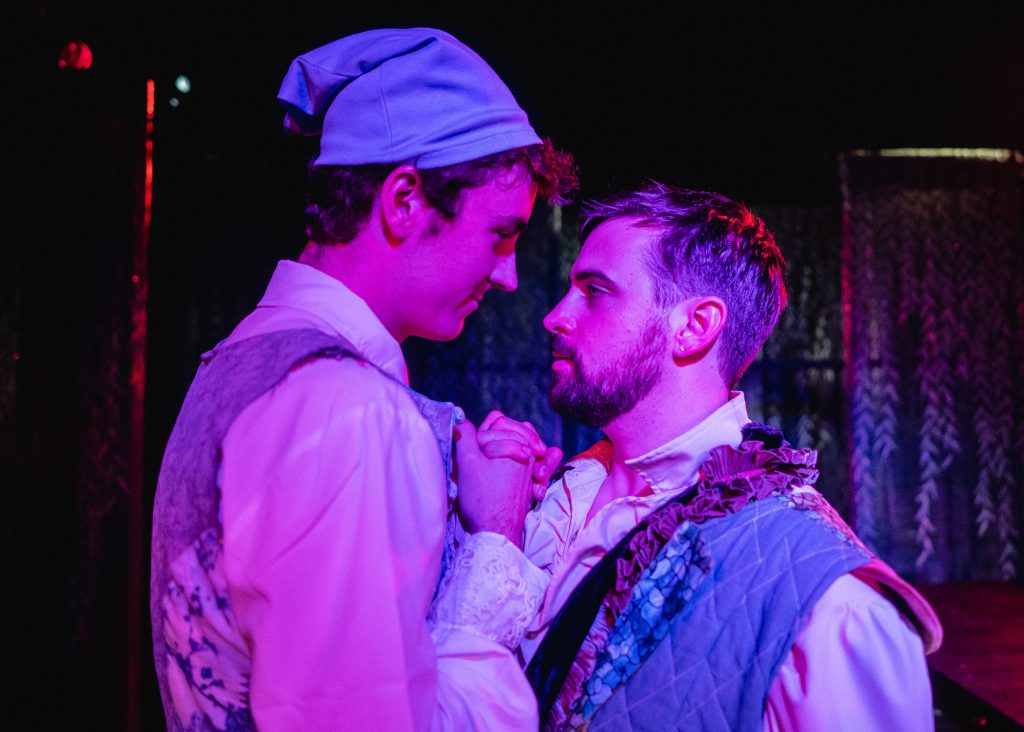 The Lord’s official fool, Molyneux (Ernest Henton), arranges for Skip (Declan Collins), a lowly servant boy with a propensity for the pen, to take on the task of punching up the Lord’s poetry. Skip, the archetypal cherubic virgin, produces an original sonnet of superior form and expression—except their poetry was not written for any fair lady, but for Lord Montoya himself!

Thus ensues a slippery slope of lies and deceit but with a non-heteronormative twist. Skip is in love with Montoya. Montoya reciprocates Skip’s feelings but is class-bound to marry Lady Gabriella. Their feelings for each other come to a head in a steamy painting scene reminiscent of Patrick Swayze and Demi Moore in “Ghost.”

But treachery is afoot! Molyneux tells servant Esperanza (Emilie Rose Danno) of his plans to fake nobility to win the hand of Gabriella for himself. But Esperanza, who secretly harbors feelings for Molyneux, colludes with Skip to act as saboteur to his plans.

Meanwhile, burly female bodyguard Lorca (Jenna Steege Ramey) also has romantic feelings for Gabriella and is willing to fight any suitor to the death.

Ramey as Lorca steals the show with an explosive soliloquy as she expresses her virility while performing arm-flexing chin-ups. Phischbreath (Frank Nall) is a wandering, knavish rogue who dispenses advice (between huffs of brake cleaner!) in a tone so nuanced that he becomes overpowered by the laughter of the audience. Often yelling at the top of their lungs, the entire cast’s energy is impressive.

The set design by Kevin Hagan is whimsical, with alternating rows of gossamer fabric embroidered with vines of pinnate leaves giving the room a dreamlike quality. Handmade costumes by Mary Nora Wolf and Russell Yost do a good job of mirroring the Elizabethan period.

One of the goals of the production is to challenge the status quo of sexual normativity, but it was pleasant to find it not challenging to watch. In this world, the stigma of love between same-sex couples never comes up. “Malapert Love” has a lot to say about economic class struggle and the contradictory nature of love, but it’s what it doesn’t need to say that rings loudest.