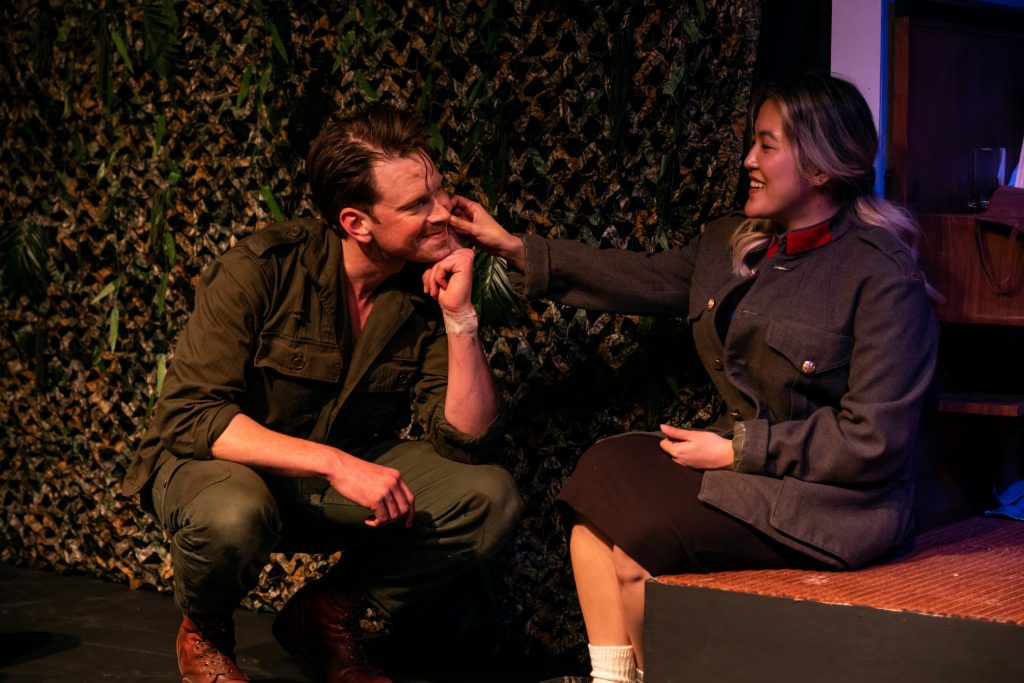 “Among The Dead” with Sam Boeck and Malia Hu/Photo: Joel Maisonet

Hansol Jung’s play jumps place and time, though not in chronological order. “Among the Dead” explores the shifting morality—most of it horrifyingly immoral—that overcomes nations, young adults and abandoned children in wartime. Chronological order would be too neat to convey the moral confusion and intergenerational suffering. The logic—or illogic—of time jumping forces audiences to work out the play’s conflicts from the heart more than from the rational brain. The play begins in the 1970s in a shabby hotel room in Seoul evocatively assembled by scenic designer, Paloma Locsin. Ana, a serious, clearly disgruntled woman in her twenties has come to the city with a wooden Korean cremation box filled with her father’s ashes. Ana, played with convincing intensity by Malia Hu, looks like she may be Korean but cannot speak the language. She’s told no one about her trip. A loud, annoying safety announcement is broadcast into the room. Then there’s a knock at the door. A courier speaking American-accented English arrives with a package for her. She freaks out and pushes him away.

The package, the courier says, pushing his way back in, is a diary kept by her American father during his war years, first in Burma in 1945 where the Allies battled the Japanese, and then in Seoul at the soon-to-be bombed Hangang Bridge in June, 1950 just as the Korean War pulled American soldiers into battle there. South Korean forces destroyed the bridge to thwart enemy advances into the city, and killed hundreds of refugees who were on the bridge at the time. The setting will have deeper meaning to Koreans and those familiar with the war. I am embarrassed to admit that I had to look it up after the show. Hansol Jung doesn’t offer the fuller context of the bridge scenes, but those in the know will also know the scenes’ outcome.

The courier, it turns out is Jesus Christ, manifested as a chill globetrotting, often clueless, hippie. One running gag in the show is that he doesn’t know that Mt. Fuji is in Japan, not Korea. Colin Huerta plays Christ as both caring and aloof. Still, he has a lot of what Ana seems to need, including the diary and some potent weed to smoke while she digs into it. The weed kicks off the time machine. 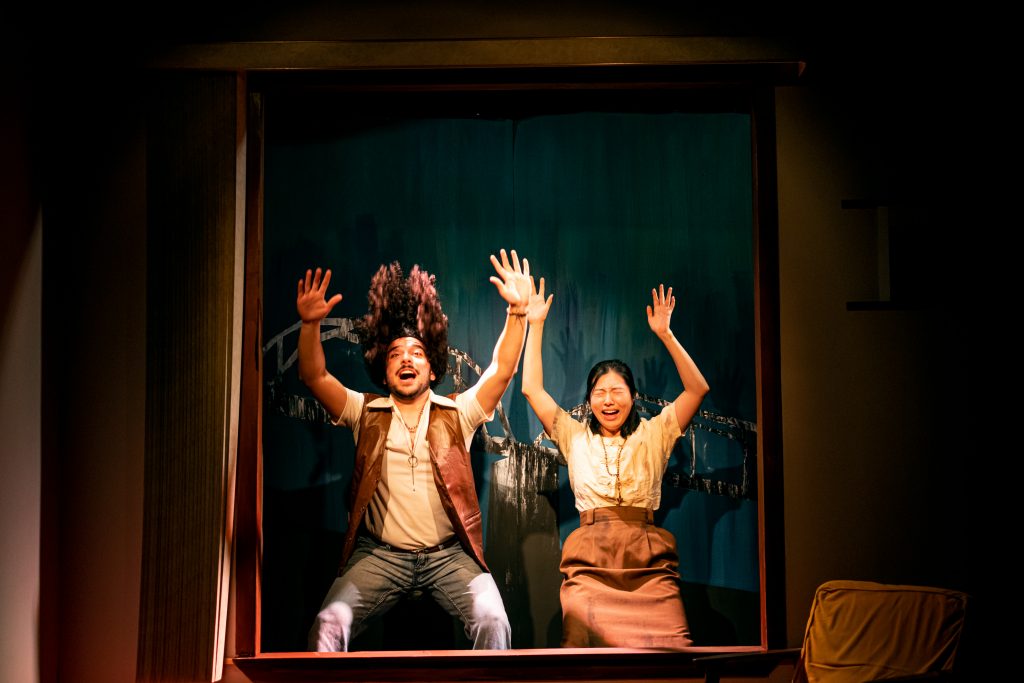 Coming into Ana’s addled view outside her hotel window is her father, Luke, as a young soldier in Burma. Sam Boeck as Luke gets the “Good American” balance of wanting to do good and choosing badly just right. In the scene within the scene, he’s hiding behind a wall as a group of Japanese soldiers—who we never see—gang rapes and beats nearly to death a Korean child. Luke, who has been separated from his unit, bears witness to this alone and feels powerless to intervene. The girl, however, is alive after her bludgeoning and, in a seeming act of mercy, Luke kills her. Time then jumps to the Hangang Bridge where another young Korean woman, called only “Number 4,” awaits a rendezvous with the American father of her child. Luke and Number 4 had connected before she had escaped her enforced sexual service to the Japanese Army as a “comfort woman.” As the quiet, traumatized Number 4, Jin Park shows a disarming gift for conveying her character’s internal pain, fear, anger and yearning. It’s one of the best performances I’ve seen this year.

The drama of the couple’s fate plays out as Ana plies the diary. Jesus enters the story at nearly every juncture, sometimes helping the characters through their traumas but also confusing them. Laidback Jesus is a presence that is divine but powerless to save innocent lives from cruel deaths.

I confess that I could not fathom all the plot points in “Among the Dead,” and have worked to piece them together since. It could be me, or it could be the design of the show meant to keep matters unbalanced. The drama offers a good dose of plot and emotional twists and the play, jokes, violence, human foibles and all, is provocative with a profound end that had the house drying its eyes.