“The Lion King,” Circle of Life with Cheetah and Giraffes/Photo: Joan Marcus

How often does a pop culture phenomenon become highbrow art? In the case of Disney’s “The Lion King,” designer and director Julie Taymor’s revolutionary stage production has a life of its own across a twenty-five-year existence that has had even more impact than the original 1994 animated film. (Even the 2019 Disney “live-action” remake ended up borrowing from it.)

“The Lion King,” the play, remains the monarch of Disney stage transfers, the one live Disney show that even non-Disneyphiles seek out. And unlike, say, Andrew Lloyd Webber’s “Phantom of the Opera,” which is getting ready to close on early next year after an all-time record of thirty-seven years on Broadway, there are no sarcastic eyerolls when “The Lion King” play is mentioned. There is an aura of reverence about this show that is unparalleled in the world of Broadway musicals. 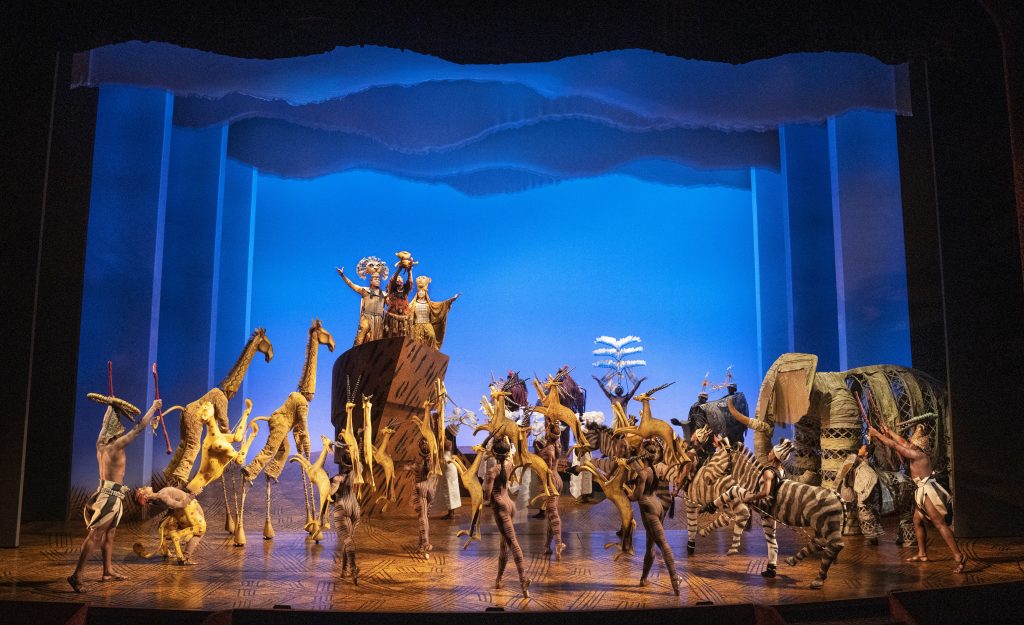 Company of “The Lion King” on Broadway/Photo: Matthew Murphy

The North American tour of “The Lion King”—itself now twenty years old—is back in Chicago for the holidays to remind us of its wonders. The call-to-order shriek of Rafiki  (Gugwana Dlamini) and African choral singing and propulsive rhythms (two percussionists visible across boxes to each side of the stage), to the magical menagerie in Taymor’s stunning costumes that parade in through the aisles to represent the “Circle of Life,” to a large rising center stage Sun made up of shimmering yellow silk, still cause jaws to drop, young and old.

The music, includes the animated feature’s pop songs by Elton John and Tim Rice and songs have been added, most memorably by South African artist Lebo M., including the anthem that is the heart of the show, “They Live in You,” sung by Mufasa (Gerald Ramsey) to young Simba (Jaylen Lyndon Hunter) across a starlit background and then reprised by Rafiki as the eleven-o’clock number “He Lives in You.”

The star of the show has always been its brilliant stagecraft, all meticulously the real deal. Nothing digital here. Yet Taymor’s masks, costumes and animal appendages would be mere inanimate objects without the grace, elegance and movement of a first-rate cast that brings them to life so compellingly that we willingly surrender ourselves to be transported, our imaginations invited to fill in the rest.

Part of the power of “The Lion King” has been not only that it is a show with a life-affirming archetypal message about loss and discovery that resonates with all cultures and ages, but that it is the ideal entry point for even the youngest audience members to get the theater bug in a big way by demonstrating the unique and transformative power of the medium.