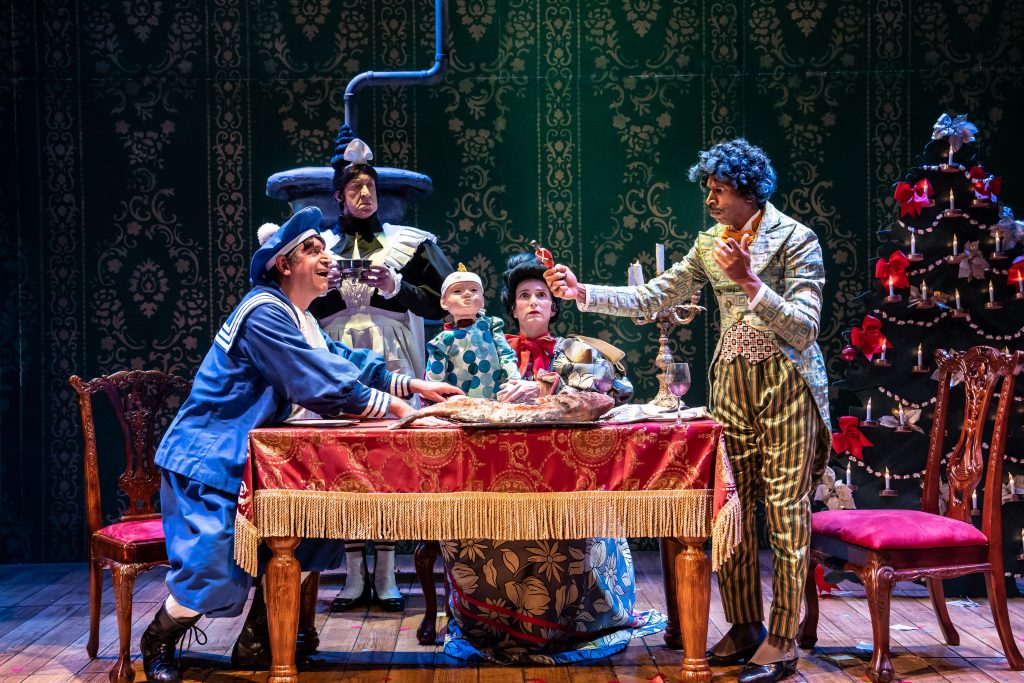 Lookingglass Theatre’s “The Steadfast Tin Soldier,” which opened to glowing reviews in 2018, has become a Chicago holiday theater tradition, along with “The Christmas Carol” at the Goodman and Joffrey Ballet’s “The Nutcracker.” Fans report seeing the Mary Zimmerman creation multiple times.

Though I’m a fan of Zimmerman, Hans Christian Andersen and Christmas, I have avoided this show for a cowardly reason. As a child, I was terrified and grieved by “The Steadfast Tin Soldier,” though it was still a favorite. As in the “Toy Story” movies, toys come to life when humans aren’t looking. But this tale is a tragic one—a tin soldier with a missing leg falls in love with a paper ballerina, since one of her legs is lifted so high that he thinks it’s missing, too. A horrid jack-in-the-box scolds him for his presumption, and sends him on a journey that ends with destruction. How could this be made into something to take the kids to after shopping at Christkindlmarket? Will there be a dumb happy ending?

An opening-night viewing taught an essential Chicago lesson—never underestimate Zimmerman. She doesn’t soften this story at all. Instead, the production is infused with Lookingglass magic—dance, acrobatics, astonishing puppetry, music and startlingly gorgeous scenery and costumes. When you leave the theater, you feel oddly changed, infused by color and deep emotion, ready to take on whatever terrors the holidays bring. 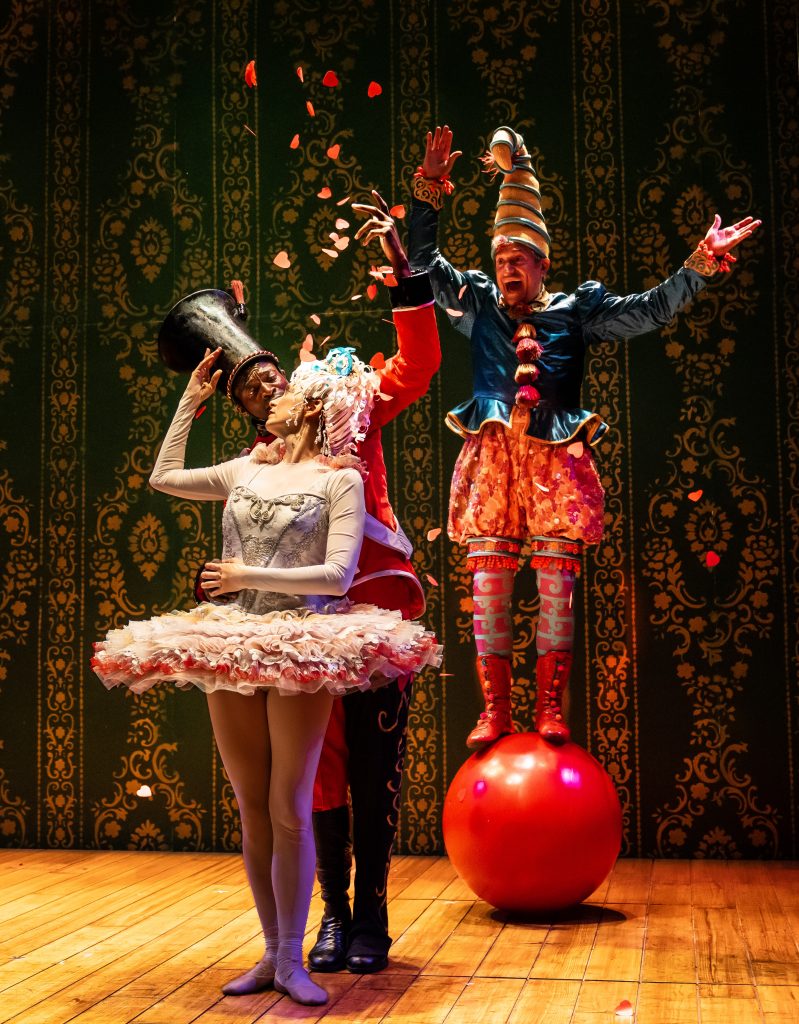 The one-hour show is performed without spoken words, pantomime style, so it’s fit for all ages and languages. In a small orchestra pit are four musicians dressed in eighteenth-century costumes, playing music by ensemble members Andre Pluess and Amanda Dehnert. An elaborately painted proscenium shows scenes from the story, and the stage is concealed by a painted advent calendar. Before the show opens, actors dressed like beautiful antique toys open up calendar pictures that foretell objects in the show—a fishmonger’s cart, pink ballet slippers, a Christmas tree.

Then the calendar lifts, and we meet the characters. Sometimes the tin soldier is an actual toy—manipulated by a giant puppet baby, or tossed back and forth by street urchins—sometimes he’s Lookingglass ensemble member Adeoye, dressed in a tall black hat, red coat and black boots. One boot covers the knee, and on the side is painted in gold letters “MISSING.” Adeoye suggests the missing leg by hopping, spinning, and falling while keeping absolutely straight.  Adeoye manages do all this while conveying dignity and showing in the most restrained way his love for the ballerina, touchingly played by ensemble member Kasey Foster. 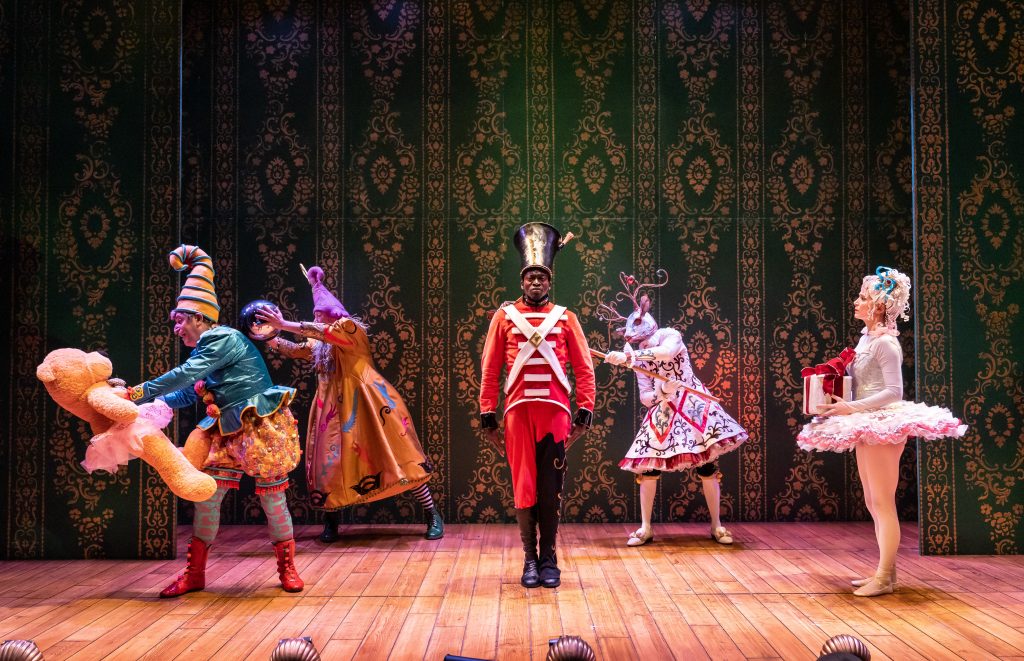 Rounding out the remarkable cast is Anthony Irons as the goblin-in-the-box, Christopher Donahue as the nursemaid, and John Gregorio as the rat. As usual with Lookingglass, actors take on several roles, and there are terrific comic setpieces, including a scene in which the fishmonger falls for the unlovely maid, and when boys fight over the soldier before putting him in a paper boat.

So be steadfast, overcome your aversion to downtown crowds, and see “The Steadfast Tin Soldier.” It’s a reminder that sadness is part of the best art, and sometimes what makes you tremble is what you really need.

“The Steadfast Tin Soldier” at the Lookingglass Theatre, 821 North Michigan, lookingglasstheatre.org. Through January 8, 2023.