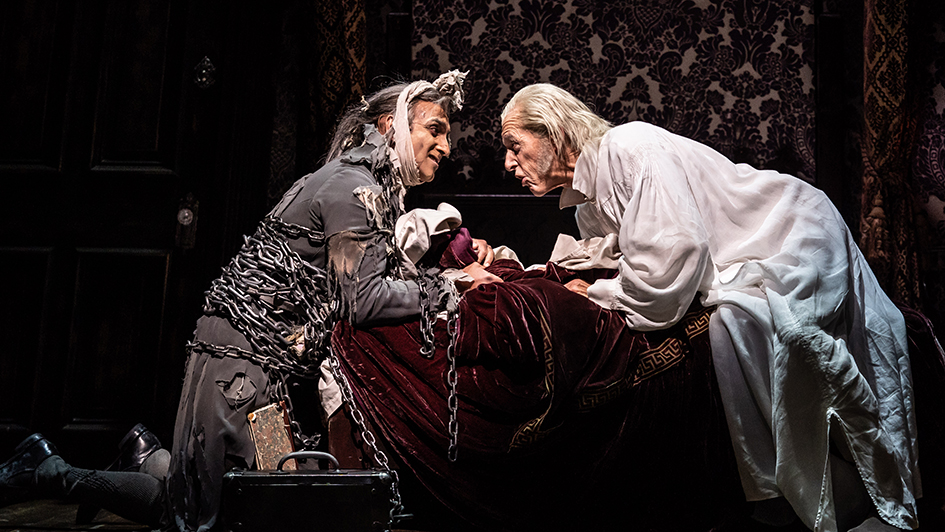 Believe it or not, I was one of the folks in the audience attending their very first Goodman “Christmas Carol.” The forty-five-year-old holiday tradition is new to many in the audience and beloved by those who return time and time again. I didn’t understand the hype around this production before attending this opening night. Although I could watch “The Muppet Christmas Carol” every night in December, I’ve never been a massive fan of Scrooge’s story—until now.

Consider me a “Christmas Carol” convert.


The Goodman’s production of Charles Dickens’ story is unlike anything I could’ve imagined. Equal parts imaginative holiday magic, Dickensian gothic style, and honest-to-goodness humanity, this production does something extraordinary. It makes Scrooge human. Larry Yando’s interpretation of Ebenezer Scrooge shows us not a shadow of a man, but a man plagued by shadows. Yando is unafraid to let Scrooge be something more than a caricature, which is how he is often shown. He is silly, emotional, loving, as well as sinister. We finally get the opportunity to see a truthful understanding of Dickens’ Scrooge. What a gift.

The dozens of performers who make “Christmas Carol” possible transform every scene. Whether they are partaking in Mrs. Fezziwig’s holiday soiree or meandering the streets of London, the energy never ceases to emanate from the stage. Jessica Thebus’ meticulous direction keeps every moment  alive. Todd Rosenthal’s sets, Keith Parham’s lighting, and Richard Woodbury’s sound design seamlessly transport us at every moment.

Standout performances are too numerous to count, but a few are too good not to mention. Kareem Bandealy’s iterations of Jacob Marley (particularly the slightly horrifying ghost sequence) are impeccable. Bandealy’s range in this show is not to be missed. Meanwhile, Bethany Thomas’ Ghost of Christmas Present is now and forever shall be the ultimate interpretation of the character. Not only do audiences get Thomas’ signature comedic timing, but they get her heavenly voice, too. And Dee Dee Batteast as Scrooge’s niece Frida is proof that we don’t need the original Fred to do this story justice. In fact, Scrooge’s musings on his sister make more sense when they’re centered on a niece rather than a nephew.

There is so much to love about Goodman’s “Christmas Carol.” I never expected to be taken aback by a story I’ve heard, seen, and read so often. But, unlike eggnog, which will never win me over, this show settles one’s spirit like a warm cider. It’s familiar and fond with just enough of that holiday season sparkle to keep your spirit aglow.