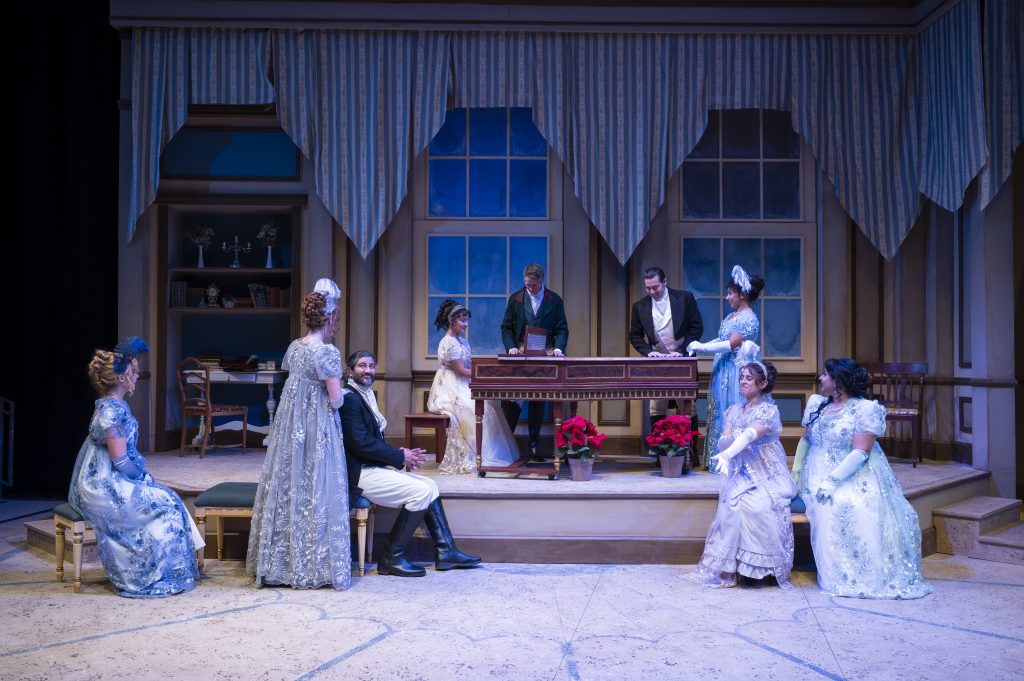 The cast in Northlight Theatre’s “Georgiana and Kitty: Christmas at Pemberley”/Photo: Michael Brosilow

The third and final play of Lauren Gunderson and Margot Melcon’s “Christmas at Pemberley” triptych was given its “rolling world premiere” Friday night at Northlight Theatre. Northlight has co-commissioned all three plays, which speculate how the beloved characters in Jane Austen’s “Pride and Prejudice” spend Christmastime, 1815.

It is worth noting that I had not seen either previous play and that each is designed to stand on its own. The only giveaway that there are prequels to this installment is how quickly Christmas itself passes: we are already well into the day and soon all are celebrating Boxing Day, the British day after Christmas when presents are given to servants.

Guests are calling. One asks at the sight of a Christmas tree with red ribbons and pine cones what it is, true enough for 1818 England as Queen Victoria and Prince Albert wouldn’t make the German custom fashionable until they had one in 1848.

Henry Gray (Erik Hellman) has been corresponding with Georgiana about music and is now coming to court her, if not more. But a letter will reveal he has been long previously engaged by his family to help its financial woes. Mr. Darcy (Yousof Sultani) will have none of this and throws him out. I don’t know how he is portrayed in the other plays, but here Darcy starts out really overbearing, as if he had never met Elizabeth (Amanda Drinkall). Oh, and Henry’s friend Thomas O’Brien (Nate Santana) gets involved with Kitty. 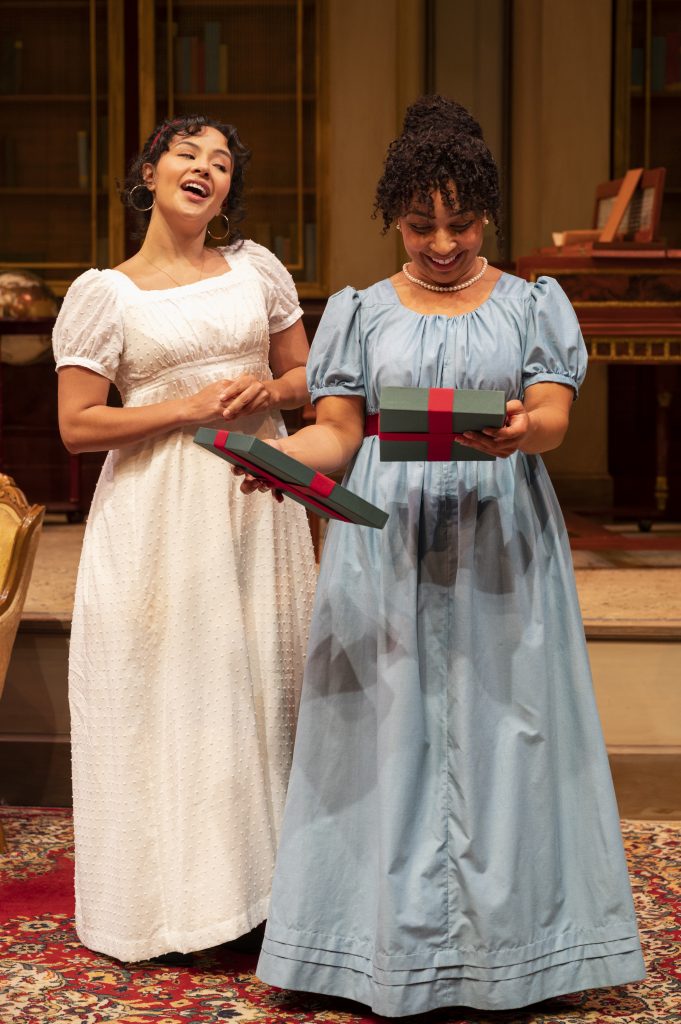 By Act II, Kitty and Thomas have married but Georgiana is still single. She is a pianist, and a feminist. Kitty helps Georgiana give a concert six Christmas Eves later and form a Women’s Musical Society. Who should happen to print the programs? Henry Grey, now successful and still unmarried and coming to deliver the programs himself. Trying to protect Georgiana, Kitty informs Henry that there are no seats left at the concert.

I won’t spoil the plot twists and turns but suffice to say that as predictably as the romantic reunion unfolds, the plot goes a bit “Ms. Holland’s Opus” meets “TÁR.” It becomes quite contemporary with Georgiana advocating for a complete rethinking of women’s roles in society, culture and family. Yes, she will even attempt to convert her chauvinistic brother.

In a society obsessed with sequels, it makes sense to want to give more life to literary characters known and loved. My main quibble is maintaining consistency and plausibility within the world of Jane Austen, which are definitely stretched here. Nonetheless, the cast gives the material a lot of heart and “Georgiana and Kitty: Christmas at Pemberley” is a fun holiday diversion.