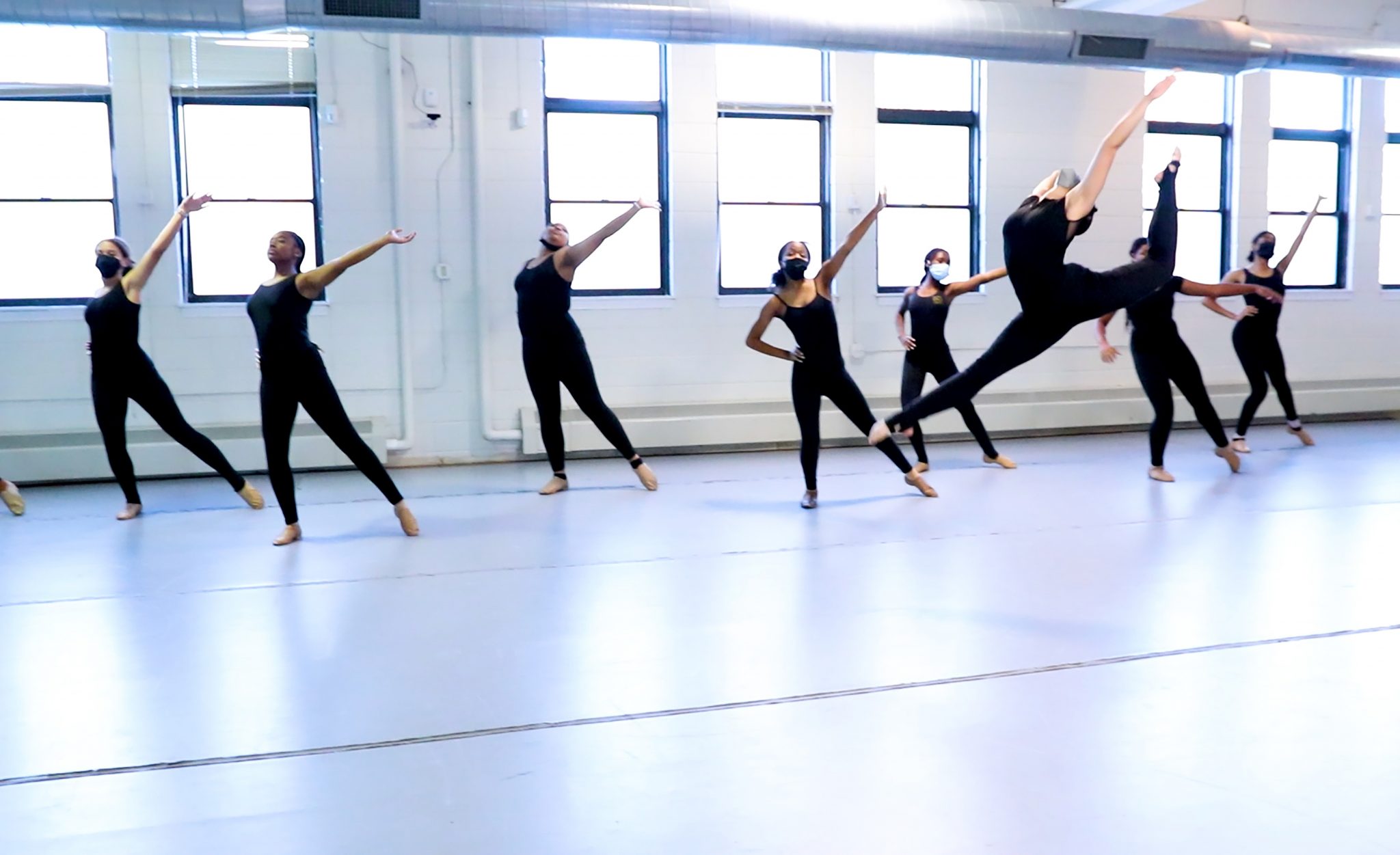 Erin Barnett grew up in Chicago. She fell in love with dance at a young age and started taking classes at the historic Mayfair Academy of Fine Arts, then focused on her passion, classical ballet, at the Ruth Page Center for the Arts. It was the eighties and nineties, and Barnett describes experiencing the subtle and not-so-subtle racism commonly directed toward Black students training in the Eurocentric art form. “Microagressions, racist training, instructors that ignored me,” she says. “I thought, ‘I just want to dance, why do I have to learn this at an early age?’”
And dance she did. Undeterred, Barnett went on to study theater with a concentration in dance at the acclaimed HBCU Howard University, then on to a career with professional companies across the country, including Garth Fagan Dance in New York, Philadanco in Philadelphia, and for three years as part of the original Las Vegas cast of “The Lion King.” When Barnett returned home to Chicago in 2015, she was stunned to discover how little had changed.

“I was teaching classes and I’d meet all these really talented dancers. I’d ask where they were dancing,” she says. “They’d say they were just taking class and didn’t have a contract with a company. There are so many dance companies in Chicago, so I started looking at their websites and seeing only, like, one Black dancer in each of these companies. I was like, ‘What the hell?’ I was expecting that coming up, but now? It was infuriating, honestly.”

Barnett took that fury, along with her extensive professional connections, and created Black Girls Dance, a project designed to open doors for talented, hard-working, and often overlooked young women of color to pursue dance careers. Barnett originally thought of a one-night-only performance with commissioned pieces from established choreographers—“Big dreams, no budget,” she says—but the project grew into a regular series of sponsored masterclasses. From there, an annual conference took shape, again with a focus on scholarships. “Dance for a lot of families of color is a luxury, and if families have to decide between food or dance classes, dance is going to lose every time… Rightfully so. I was granting a thousand-dollar scholarship to one deserving girl who could take classes wherever she wanted.”

Barnett is now the director of the renamed Mayfair Arts Center, or MAC, which houses classes for the more than a hundred students training with Black Girls Dance. Mayfair Academy was on the brink of closure when former director Peggy Sutton—daughter of legendary tap dancer and Mayfair founder Tommy Sutton—retired to Arizona, but the Chicago Human Rhythm Project acquired the building at a pivotal moment, and hired Barnett, who had been tapped for the position by Sutton before the pandemic hurled its wrench into the performing arts world. CHRP kept Mayfair a home for dance excellence on the South Side, and brought a budget to upgrade equipment in the five studio spaces.

Barnett describes her return to the building where she first took dance as a child as a full-circle experience, akin to her time with Garth Fagan’s work, first in his company after college, then performing his award-winning choreography in “The Lion King.” As fate would have it, these circles overlap; Barnett spoke with me via phone from New Orleans, where she is on tour with “Lion King”—yes, while doing remote administrative work for the MAC during the day. She bubbles with excitement that the show will stop in Chicago and her students will have the chance to see their teacher perform at the Cadillac Theater. “It’s meaningful that it’s all happening now,” she says. “It’s one thing for me to tell them about it, it’s another for them to see it. I get to share my resources with my girls.”

Those resources have made an impact. The Reva and David Logan Center in Hyde Park partners with Black Girls Dance to present a spring and winter concert each year. The concerts are high-profile showcases for the students, some of whom will pursue dance into adulthood. On December 18, Black Girls Dance will bring “Mary: A Holiday Dansical” to the Logan Center for a second year in a row. The show is a modernization of Langston Hughes’ 1961 musical holiday classic “Black Nativity,” written, choreographed and directed by Barnett. Barnett resets the Christmas story in a contemporary high school—Nazareth Academy—where a teenager named Mary grapples with impending motherhood, in a way relatable to young people today, text threads with friends and all.

Barnett’s pride in her students is palpable. Each year she casts a high school senior to play Mary, and she gently bragged that last year’s Mary is now a freshman at Juilliard. “I don’t have kids of my own, but these are my kids. And I expect their best.”

“Mary, A Holiday Dansical,” at the Reva and David Logan Center for the Arts, 915 East 60th. Sunday, December 18 at 7pm. $40 general admission, $20 children 11 and under. Tickets at blackgirlsdance.org.