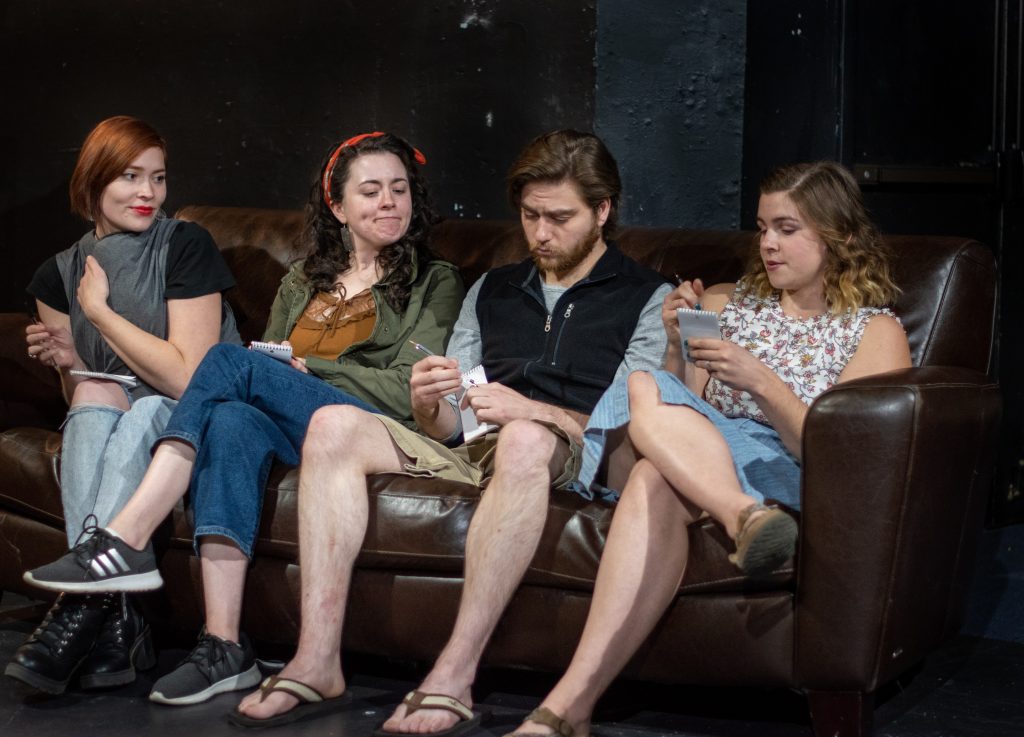 Welcome to the Covenant Canyon Ranch, located somewhere in the Rockies, where the sincerity and wholesomeness are as thick as the air is thin. In a bucolic, decidedly Christian, Internet-free environment, four couples have gathered for a weekend retreat designed to strengthen their marriages and reset their moral and spiritual compasses, under the soothing, cliché-laden guidance of the oh-so-happily married pair who own the cozy, rustic lodge.

This is the premise of “Cabin Fever,” a new play by Chicago-born, British-trained Lillian Davidson McGrady, who also directs. McGrady runs the Adamson Road Theatre Company, named after the location of the London drama school where McGrady learned her craft, which is making its bow with this production. One must salute the courage of anyone daring to launch a theatrical venture, when live performance still faces serious headwinds. The good news is that “Fever,” while not a perfect piece of theater, is a lively, well-paced, skillfully acted play, one that augurs well for this new troupe’s future. 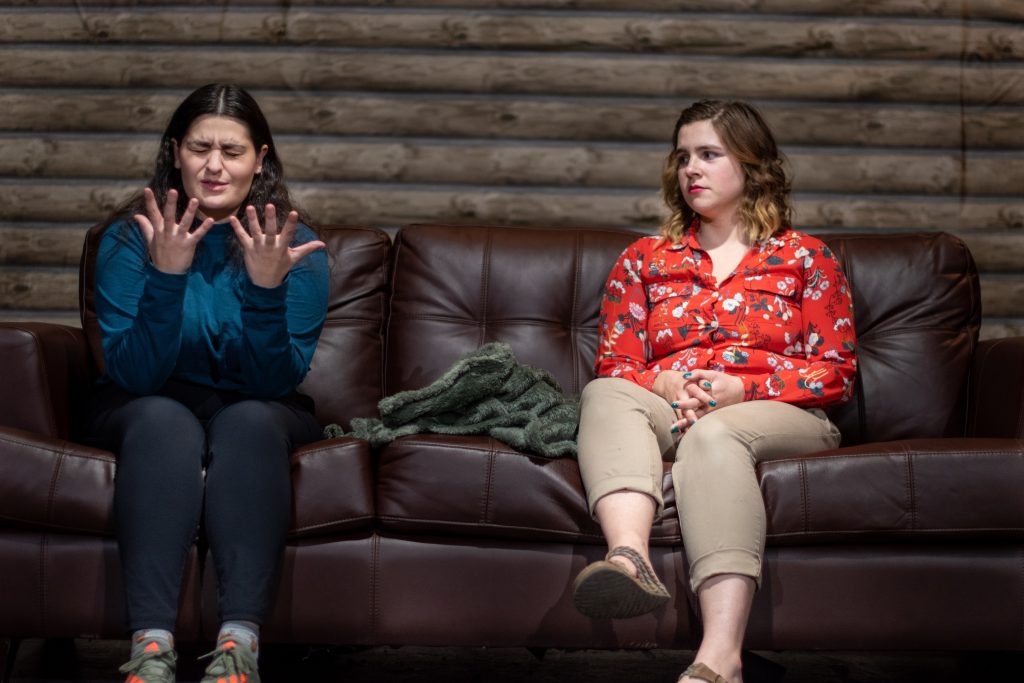 Retreat participants include Nicky (Eileen Dixon) and Delaney (Brandy Miller), a young lesbian pair from Minnesota, whose presence makes little sense at a largely Evangelical gathering, especially considering that their marriage is genuinely healthy and loving. They’re there mainly to serve as targets for the redneck barbs of Ellie-May (played with gleeful zest by Melody DeRogatis) and Brook (Thomas Tong), a doctor duo from Alabama, both of whom consist entirely of hayseed Southern stereotypes. They’re joined by catty Carly (Kristina Newcomb), married to handsome naval officer Brad (RJ Cecott), and prickly, defensive Macy (Francesca Bucci), wedded to nice-but-nerdy Aaron (Bennett Petersen). Carly and Macy had served together as interns at the lodge years ago, where they locked horns over politics, as well as murkier, more personal issues, which fester. (Macy is a virtue-signaling liberal, Carly a bible-thumping conservative.) Their barely contained conflict drives the story and gives the play its bite. The mystery is what happened seven years ago, in this place that exists to mend fraying relationships, to fuel such enmity.

Retreat co-leaders Mark (Eric K. Roberts) and Charlotte (Jasmine Robertson) present encounter session exercises, play games, do yoga, lead hikes and deliver syrupy self-help platitudes—“Remember, L.O.V.E. = T.I.M.E.”—about life, love and commitment. Listening to the couples describe their lives and marriages, one senses a certain amount of editing taking place, as though the secret to a happy relationship were avoiding unpleasant reality at all costs. Beneath it all is a religiosity that’s heavier on judgment and denial than compassion and self-acceptance.

While not all scenes are as shaped and rounded as they could be, playwright-director McGrady is a capable storyteller, crafting plausible and engaging characters who communicate in sharp, well-focused dialogue. The youthful ten-person cast is strong from top to bottom, capturing the basic awkwardness of the retreat’s artificial intimacy. At the same time, they convey through expression and body language hints of their characters’ quiet frustrations within the complex, pressure-cooker institution known as marriage.

As marriage adviser-cum-camp counselor Mark, Roberts evokes a stiff, subtly crazy Mr. Rogers. Jasmine Robertson is strong as Charlotte, a one-time Air Force officer, who in biblical fashion submits to her husband’s will, even though this means accepting–or pretending to accept—the doctrine of male superiority, an idea belied by her own military experience. And Bucci and Newcomb shine as Macy and Carly, two seemingly opposite characters who come to resemble one another in ever-escalating hostility and thin-skinned self-righteousness. Their animosity gives a timely touch to the show, reminding us of how difficult it is to escape universal polarization, even in this mountain paradise far removed from civilization. 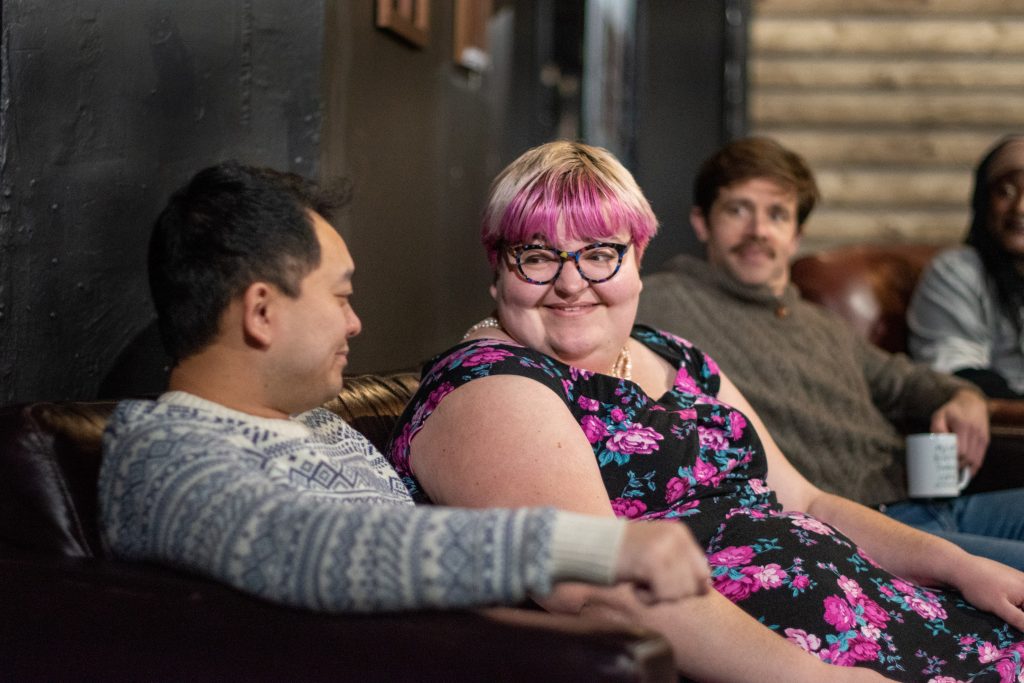 The play presents itself as a commentary on the dire effects of “purity culture”—and by extension, the whole fundamentalist package—on girls and women. But interestingly, the right-wing characters—including the aggressively insecure Carly—are generally more human, and more compelling, than the liberal ones, suggesting that the playwright’s dramatic instincts may be in conflict with her politics. Beneath her dogmatic, simplistic pronouncements about motherhood and morality, Carly has recognizable needs and feelings, whereas Macy possesses only liberal sound bites, delivered with grating superiority. Macy’s lack of a genuine character trajectory lessens the impact of the play’s ending.

Still, “Cabin Fever” is a promising debut for McGrady and Adamson Road. Using unforced dramatic means, the play reveals a culture that thrusts people into a quest for an unobtainable and perhaps undesirable perfection, turning life into a grinding competition that everyone ends up losing.