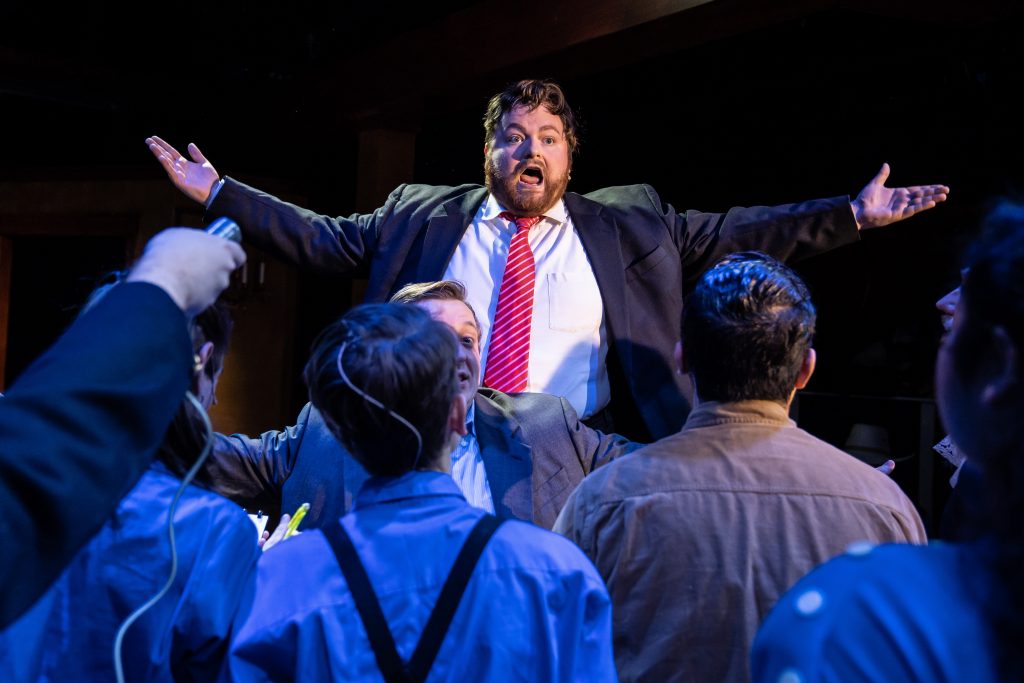 Teddy Gales as The Governor in “The Best Little Whorehouse in Texas” at Theo Ubique/Photo: Liz Lauren

With the rise of services like OnlyFans, the legitimacy of sex work is up for popular discussion. It feels like we are on the cusp of a social breakthrough. But then a show comes along that reminds you, no, we’ve been having this discussion for a while.

Politicians and prostitutes collide in “The Best Little Whorehouse in Texas,” presented by Theo Ubique Cabaret Theatre. Director Landree Fleming makes good use of the theater-in-the-round format, and creates a three-dimensional atmosphere with actors jumping into, performing among and rushing through the audience.

Like Fleming, choreographer Jenna Shoppe also works in three dimensions. During the song, “The Sidestep,” the ensemble encircles a pedestal-risen Governor and rotate around him, producing syncopated boot stomps that complement the music. Expect to see references to line dance, praise dance, honky-tonk high-kicking, Broadway classics (in-the-trenches) and tap dancing. 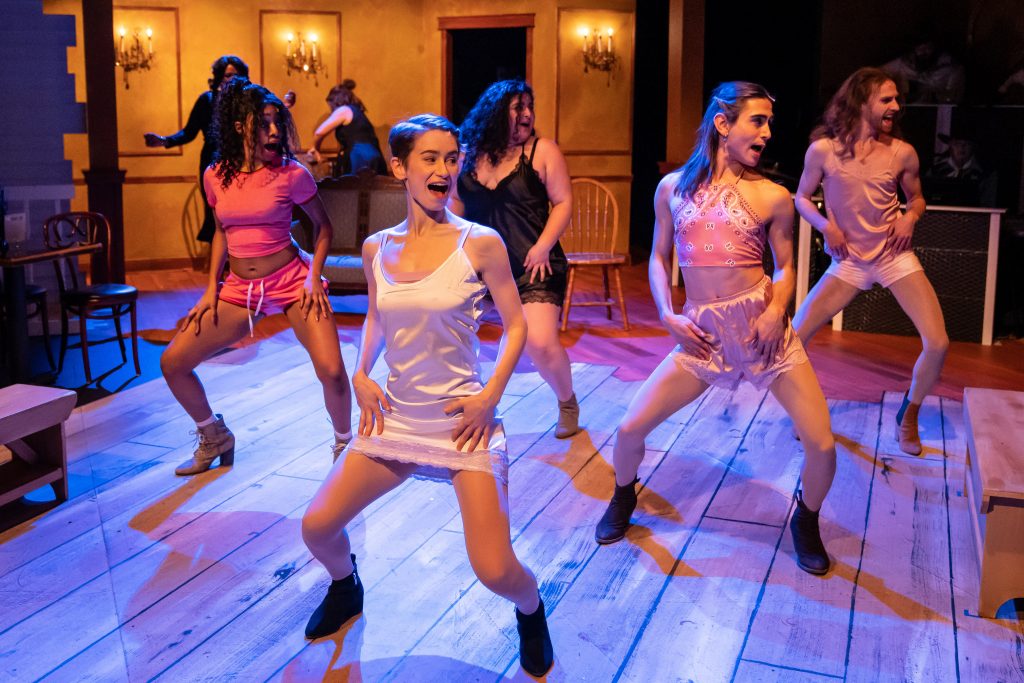 The Ensemble of “The Best Little Whorehouse in Texas” at Theo Ubique/Photo: Liz Lauren

The show takes place primarily in the lounge of the Chicken Ranch, a quaint, wood-paneled brothel on the outskirts of Lanville County, Texas. Miss Mona (Anne Sheridan Smith) is the brothel owner—don’t call her the madam!—and runs a tight ship, with etiquette rules so strict they make the Coq d’Or at the Drake Hotel feel like a lowly dive bar. Smith’s smooth alto voice is powerful, as in the ballad “Girl You’re a Woman,” and playful in the saltatorial “A Lil’ Ole Bitty Pissant Country Place.”

Both brothel and town live in ostensible harmony until wily television personality, Melvin P. Thorpe (David Blakeman) creates fake outrage by blowing the whistle on the Chicken Ranch. This “revelation” forces the Mayor, Governor and state Senator—all played by Teddy Gales—to reluctantly take political action, changing their dispositions with the direction of the wind (then blaming the “Communists” for controlling the wind). Both Gales and Blakeman are a riot, and do a good job of distinguishing between the relatively similar characters.

The ensemble sells the show with gusto. Each actor pulls double-duty swapping parts and gender roles, as comfortable in a silk slip as they are in a football uniform. There are times when, out of breath, someone struggles with singing a note or two, but the pace is fast enough that you don’t dwell on it.

The score by Carol Hall is managed well by music director Isabella Isherwood. Set on a five-piece band, they start a little stiff but loosen up as the show unfolds—with a rousing fiddle solo by Raquel Navarro.

Thus the saga of the working-class, two-faced politicians and manufactured outrage is told again. “Doesn’t it feel a little too familiar,” asks Fleming in a note in the program, “Watching politicians and media conglomerates—who praise God with one hand while sticking the other hand into the honeypot—remove safe havens, access, healthcare, rights?”

Yes, it does, and this show serves as a stark reminder of that, despite its rollicking musical numbers. To get a little perspective, everyone deserves to take a trip to “The Best Little Whorehouse in Texas.”