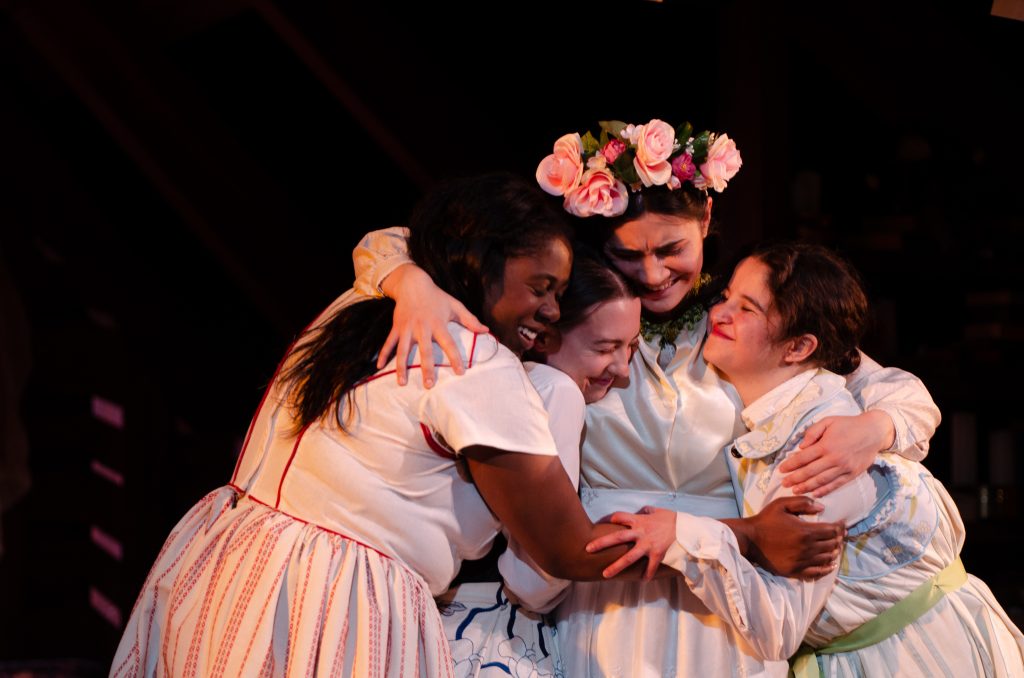 As a social barometer, Louisa May Alcott’s mid-nineteenth-century coming-of-age novel, “Little Women,” holds up. Although performed often as a play, the ostensible equality of women to men in modern-day society justifies every recurrence.

The most recent iteration of “Little Women” to hit the Chicago area is presented by First Folio Theatre at the Mayslake Peabody Estate in Oak Brook. After twenty-six years, founding executive director David Rice is retiring and closing the company, making “Little Women” the third-to-last production of the final season.

The lives of the four March sisters are framed by dark mahogany wood beams and numerous nooks filled to bursting with books in a spacious attic. Jo (Shelby Lynn Bias) is independent, a voracious reader and aspiring writer. Oldest sister Meg (Stephanie Fongheiser) is Jo’s near-opposite, content to marry and become a housewife. Third-oldest Beth (Jamie Herb) resembles a Dickensian heroine—subdued, angelic, trying to please everyone—too good for this world. The youngest sister, Amy (Esther Fishbein), is a brat, who grows to become a mature-ish artist.

Each personality trait is amplified to the maximum, making the girls appear more childish than their ages—Amy, who should be twelve years old, comes across as seven or eight, a developmental drop that afflicts all characters. But the chemistry feels right, and interactions, though highly animated, come off as genuine and heartfelt. 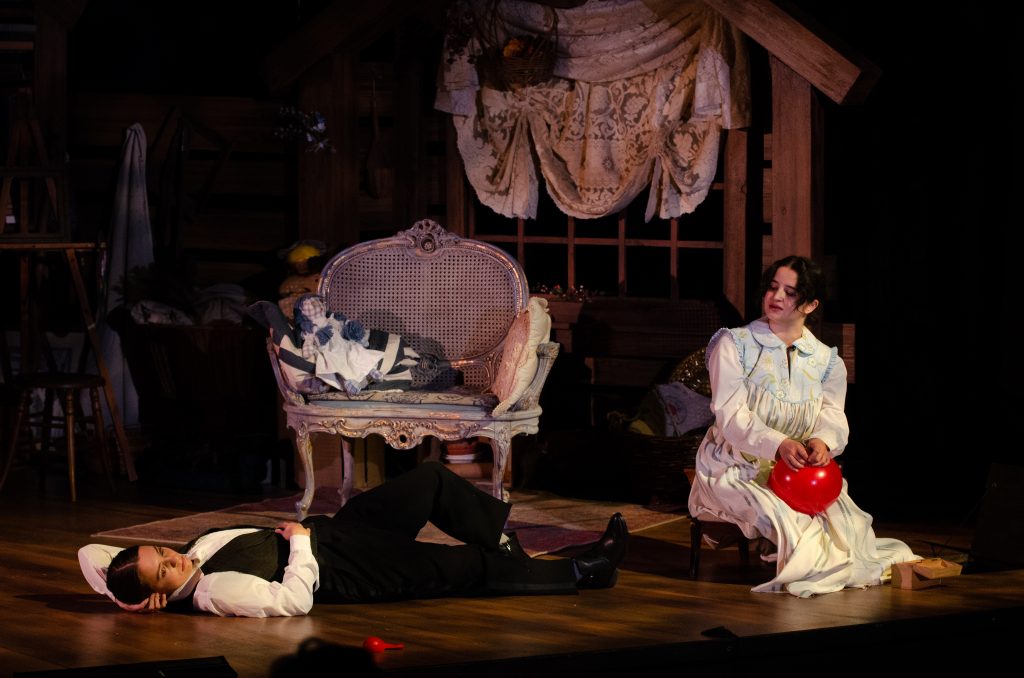 The actors perform double duty, with everyone except Bias playing both a sister and a male love interest. Fishbein briefly steps into the shoes of Meg’s future husband, John Brooke, and Fongheiser manages a German-ish accent as Professor Bhaer.

Herb plays Laurie, Jo’s eager, wide-eyed childhood boyfriend, who not-so-secretly pines for her throughout their friendship. Among fans there is an ongoing debate whether Jo should have married Laurie or not. This production is unambiguous in asserting that Jo would never have been happy with such an immature and whiny partner, and why she winds up falling for the older Professor Bhaer.

Two visual metaphors are used to great effect. While in Paris, Amy uses inflatable red balloons to symbolize her art, releasing every work she deems not a masterpiece to be sent squealing and twisting through the air. In the most brilliant scene in the production, new housewife Meg loses her mind while attempting to make currant jam, with lightweight juggling scarves representing how many things she has “up in the air.”

Director Melanie Keller moves the show along at a quick pace that keeps the viewer enthralled. The adaptation, written by Heather Chrisler, contains a few big twists that Alcott would approve of.

Today, the phrase “what is a woman” is a slur used by men on television and in politics to denigrate others. The women in “Little Women,” defined so clearly in First Folio Theatre’s recent production, show that womanhood exists on a spectrum. It’s sad that we—mostly men—need this reminder, but that is why works like this are so important, and why performers and audiences return to them again and again.