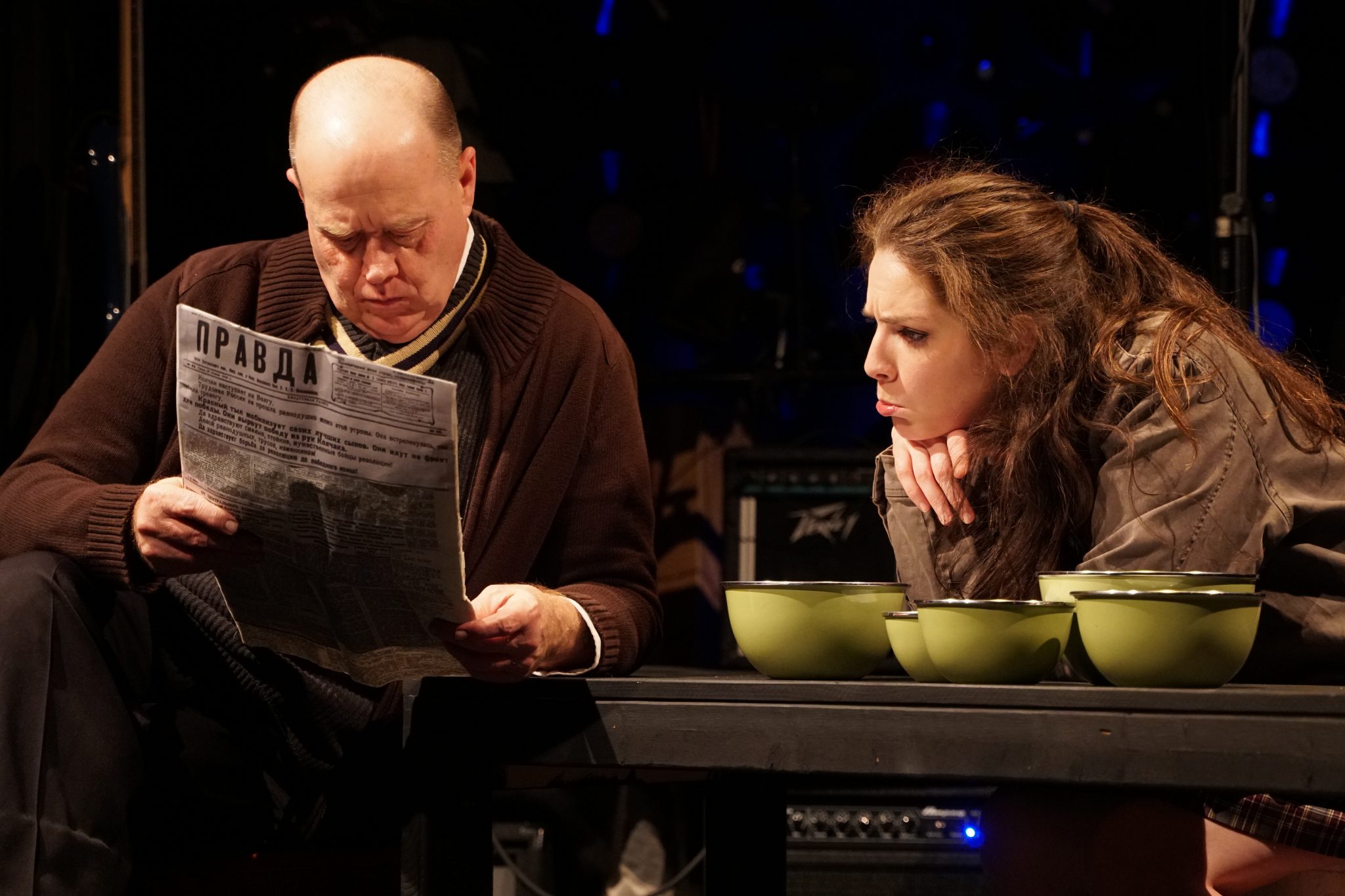 Theatre EVOLVE begins their third season with the world-premiere presentation of Katie Coleman’s “Krugozor.” Krugozor, for those of you who did not come of age in the former Soviet Union, was a music magazine modeled somewhat after Rolling Stone. Accompanied by flexi discs (a very thin, flexible record), the only-slightly-censored state-sponsored magazine introduced Western music to rock-starved youth behind the Iron Curtain. As the play wonderfully illustrates, there were other methods by which Soviet citizens could listen to groups such as the Rolling Stones and Pink Floyd. Bone records, for example, were created by used X-rays repurposed to record radio stations from as far away as West Germany. That people would go to such lengths to listen to “decadent Western music” underscores just how attractive rock ‘n’ roll was to Soviet youths.

We are quickly introduced to two such teenagers; Svetlana (Caroline Kidwell) and Vitaly (Andy Ricci). Both are from families marked by tragedy. Svetlana, however, still has both a mother and a father. The father is also in the party, which means she does not have to suffer long bread lines and other such annoyances. Vitaly, by contrast, eats almost nothing but thin soup for dinner and ultimately has to share his two-bedroom apartment with another family. The thing breaking across class barriers for these two sometime lovers is their love for rock ‘n’ roll. Svetlana has talent and, even better, access to musical instruments. Vitaly can write. Throw in a doomed friend (Ian Maryfield) and you have yourself a band. 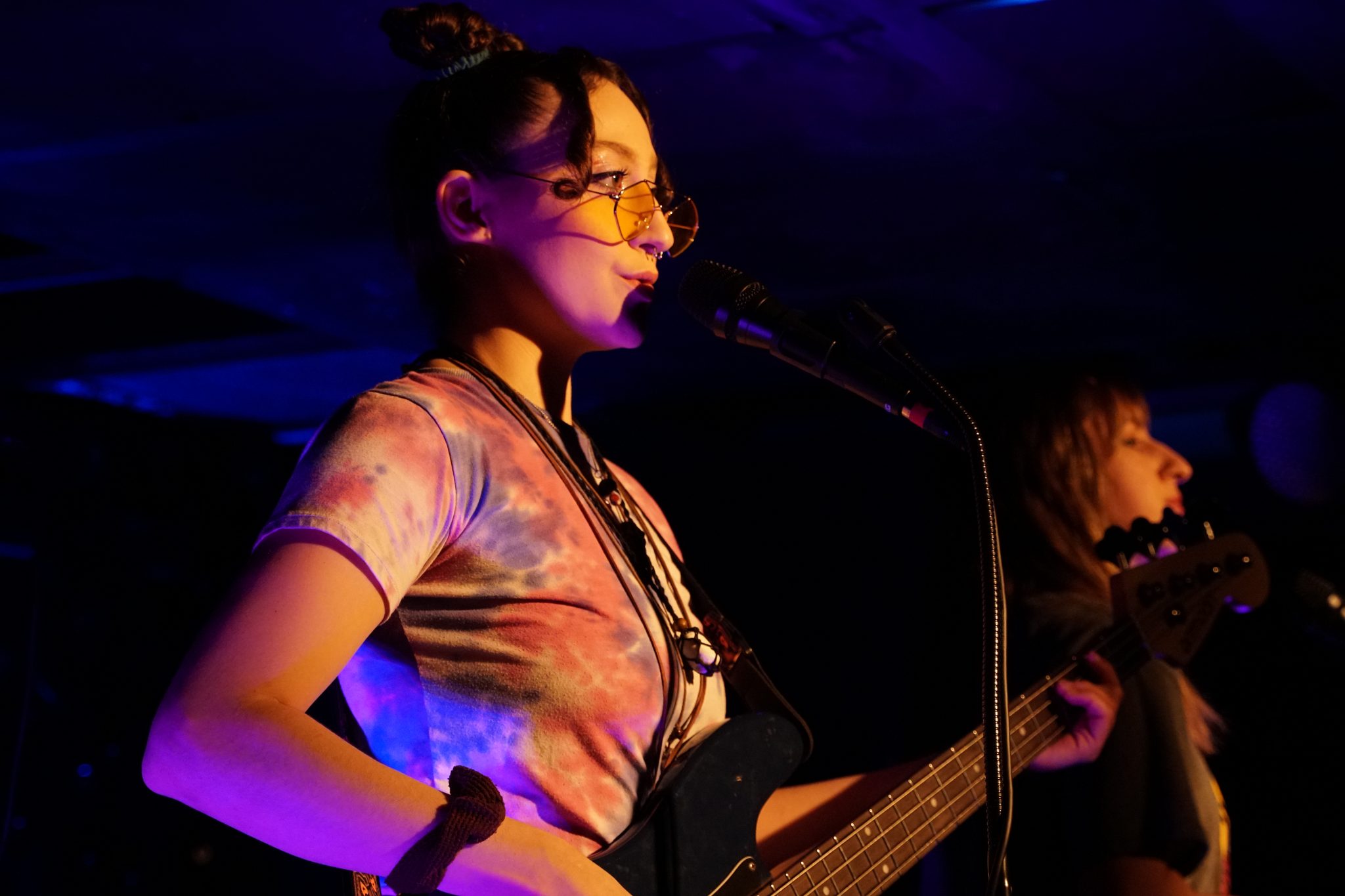 These lives are not for the faint of heart. But, under the direction of Anna Rachel Troy, they are given enough room and dignity to develop into characters worthy of our sympathy. It also helps to have an incredibly talented and versatile cast capable of repeatedly transforming between actor and musician. (Almost everything on stage is introduced with snippets of pop magic performed by a live band perfectly supporting whatever era it is that they are in.) Also endearing are frequent dream interviews Svetlana and Vitaly have with artists such as John Lennon (Ian Maryfield does a great John Lennon) and Patti Smith.

There are no weak links here but, to paraphrase the production, some people onstage are more equal than others. Caroline Kidwell is one such actress; her ability to take Svetlana from cocky teenager to broken housewife is something to behold. (Almost as impressive was her take on Fleetwood Mac’s “Landslide.”) Andy Ricci also grows on stage from idealistic Soviet boy to a man who has seen some things. The running time (two-plus hours across two acts) is longer than what might be expected. But the infectious energy of everyone involved ensures that the clever script never fails to engage throughout its length. I might not want to go back to the U.S.S.R., but I would recommend to anyone a look back at Krugozor.

Theatre EVOLVE’s “Krugozor” at The Factory Theater, 1623 West Howard, theatreevolve.com, pay what you can. Through February 4.