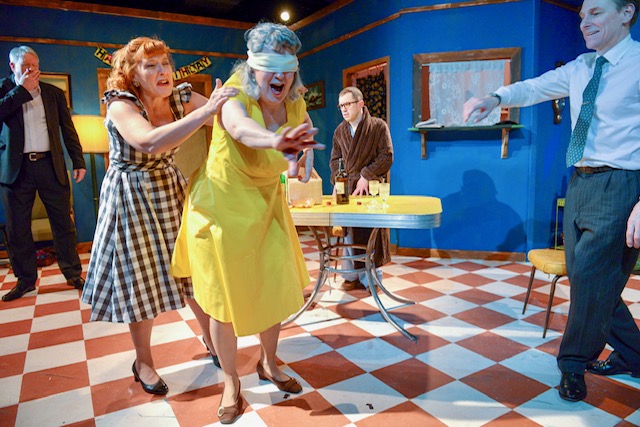 Long ago, I worked for a very large and well-known organization. After a couple of years of cubicle time, I still knew almost nothing about the company, such as who owned it or on whose behalf it was managed. I also realized that I had never actually seen the CEO who supposedly presided over its wide-ranging operations. What I did discern early on was that my superiors didn’t welcome questions about such things, and that my colleagues rarely expressed any curiosity about why they were doing what they were doing.

Which brings us to Harold Pinter’s “The Birthday Party,” the Nobel Prize-winning British playwright’s breakthrough 1958 work. The play is typically referred to as “enigmatic,” “surreal,” “absurdist” or simply “weird.” Such a response presupposes a world characterized by transparency, connection and good faith. But Pinter’s point in “Birthday Party” and other works is that this is not the world we inhabit, and that what we think of as the habits of ordinary life are often a kind of smokescreen designed to block awareness of underlying arrangements and realities.

In retrospect, I would describe my experience at the big company as “Pinteresque”—banal on the surface, but with a touch of the subtle creepiness exuded by all-powerful, hierarchical institutions. It’s the mood captured by director Terry McCabe’s perfectly cast, skillfully paced staging of “Birthday Party,” which brings to the fore both the play’s comically overdone domestic pseudo-normality and its sense of a mounting threat that’s palpable without being definable. 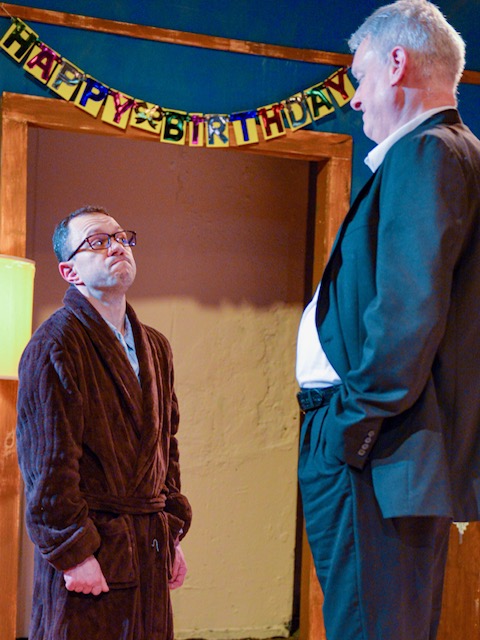 The plot is as fuzzily ambiguous as George Santos’ resume. In the middle is Stanley, an unkempt, bathrobe-clad recluse who seems at one time to have played the piano, but now just hangs around the down-at-heel English seaside boardinghouse run by Meg, who is something of a dingbat, and her laconic husband Petey, the establishment’s “deck chair attendant.”

Headachy, insomniac and grumpy, barely able to keep his inner anguish at bay, Stanley is a hot mess. He’s simultaneously infantilized and flirted with by Meg, the matriarch of this odd family, which is held together by corn flakes, cold tea and ritualized conversation. Shaky to begin with, Stanley is thrown into a near panic when Meg tells him that “two gentlemen” have inquired about staying at the B&B, which has housed no other guests in the year Stanley has been there. Meg also informs Stanley that it’s his birthday—a fact he later denies—and asks her friend Lulu, a young woman whom Stanley may or may not fancy, to deliver his present, a toy drum more suitable for a tot than a concert pianist in his thirties. 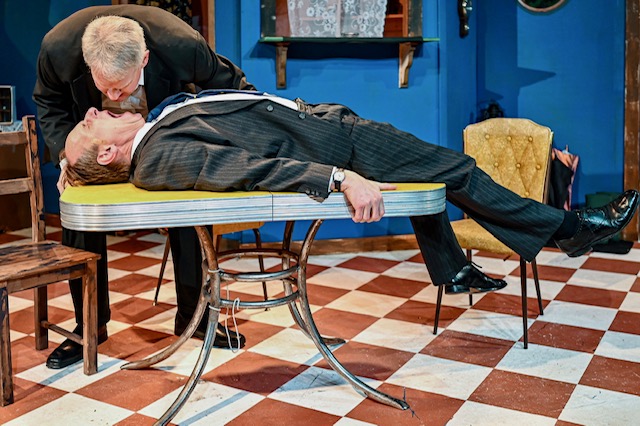 City Lit Theater’s “The Birthday Party” with Will Casey and James Sparling (on table)/Photo: Steve Graue

The remaining two acts of this two-and-a-quarter-hour production (including two intermissions) bring these elements together, as the new guests—the slick, fast-talking Goldberg and the physically imposing McCann, who are respectively the brains and muscle of the operation, whatever that operation may be—confront the birthday boy, who may or may not know them. Just before the birthday party begins, they hammer Stanley with unanswerable questions and accusations. Using language as an instrument of torture, they reduce Stanley to a quivering, nonverbal victim, ready for extreme rendition to wherever they came from.

The orgiastic party and its aftermath prove a horror show for Lulu, too, who finds herself in the bed of Goldberg and there learns things that “a girl shouldn’t know before she’s been married at least three times.” But the two sinister characters end up getting what they want from Stanley, Lulu and Meg, their hostess. Only old Petey shows any resistance, shouting at the car taking the three men away, “Stan, don’t let them tell you what to do!”

The diminutive David Fink plays Stanley with a compelling mix of querulousness and fragility. He’s no match for the well-honed tag-team assault by James Sparling’s silver-tongued Goldberg and Will Casey’s lumbering McCann, who looms over the intimidated Stanley. Elaine Carlson and Linsey Falls are well-matched as Meg and Petey, his prolonged, distracted silences serving as foil and provocation for her chatter. And Sahara Glasener-Boles reveals both sides of Lulu, the “big, bouncy” party girl and the angry, post-party accuser. Ray Toler’s simple, almost-bare set, complemented by lighting designer Stefan Brun’s use of darkness and deep color, brings out the empty, nightmarish quality of Stanley’s existence, in which he feels both too visible and not really seen.

Director McCabe makes one regrettable directorial decision, obscuring the play’s shocking climactic moment, when the maddened Stanley acts out the monstrous guilt that his two interrogators have imputed to him. Other than that, it’s a solid staging of a play that has aged well, revealing more layers of meaning and implication over time. Wisely, McCabe hasn’t forced any contrived relevance onto the play’s spare, abstract, open-ended narrative. It remains elusive and allusive, reflecting influences ranging from “Oedipus Rex” to Samuel Beckett to American film noir, while inevitably taking on contemporary coloring.

Watching the play today, the figure of Stanley shuffling around in his shabby robe, afraid or unable to go outside, puts me in mind of Julian Assange rattling around for years in the Ecuadorian embassy in London, pursued by the Goldbergs and McCanns of our own intelligence services for the sin of having told the truth. Since “The Birthday Party” premiered decades ago, audience members have wondered, who is Stanley? The sad truth is, in a world where individuals continue to feel powerless in the face of unaccountable institutions, Stanley is us. (Hugh Iglarsh)