Kelli Simpkins as Darcy and Rebekah Ward-Hays as Margot

The Pitmen Painters
Inspired by the true story of miners-turned-artists in Northern England, TimeLine presents a new play by Lee Hall, the Tony award-winning writer of “Billy Elliot.”
Begins September 6 at TimeLine

Sophocles: Seven Sicknesses
The Hypocrites’ Sean Graney’s at it again—this four-hour adaptation of the seven surviving plays of Sophocles (including “Oedipus,” “Elektra” and “Antigone”) promises all the blood, incest and eye-gouging an audience member could ask for (or bear).
Begins September 7 at the Chopin Theatre

Stars of Lyric Opera at Millennium Park
See the Lyric’s stars for free in their eleventh annual outdoor pre-season concert. In honor of the tenth anniversary of 9/11, the concert is dedicated to the victims of the tragedy, their families and the men and women of the armed service. Featured artists include René Barbera, Jamie Barton, Anna Christy and Lyric Creative Consultant Reneé Fleming.
September 10 at 7:30 at the Pritzker Pavilion

Love, Loss and What I Wore
Based on Nora and Delia Ephron’s best-selling book of the same name, the show uses accessories, clothing and a rotating cast to present “an intimate collection of stories.” And Loretta Swit brings her “Hot Lips” to a run of the shows.
Begins September 14 at the Broadway Playhouse

Still in Play: A Performance of Getting Ready
The Museum of Contemporary Art’s Stage series begins with this devised piece with the Curious Theatre Branch. Developed by Jenny Magnus during a year-long residency at the MCA, the piece features the ensemble of CTB and live music by Crooked Mouth Band.
Begins September 15 at the MCA

Red
Based on the life of Mark Rothko, “Red” focuses on his two-year struggle to finish a series of murals for Manhattan’s Four Seasons restaurant and his relationship with his young assistant. Robert Falls directs.
Begins September 17 at the Goodman

Mourning Becomes Electra
Timothy Douglas truly enters Chicago’s theater scene when he directs his first show as Remy Bumppo’s new artistic director. Eugene O’Neill’s epic, set at the end of the Civil War and based on the “Oresteia,” was adapted by Gordon Edelstein.
Begins September 21 at Remy Bumppo

Rodgers & Hart: A Celebration
From 1925 to 1943, Rodgers and Hart wrote some of the best-loved songs in musical theater. This production by Light Opera Works features favorites such as “Isn’t It Romantic,” “The Lady is a Tramp” and “I Wish I Were in Love Again.”
Begins October 2 at Second Stage, Evanston

Follies
This must be the season of Sondheim: First, see Sondheim’s lecture as part of the Chicago Humanities Festival, and then head to Chicago Shakespeare Theater for their production of “Follies,” directed by multi-Jeff Award winner Gary Griffin.
Begins October 4 at Chicago Shakespeare 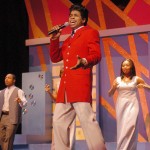