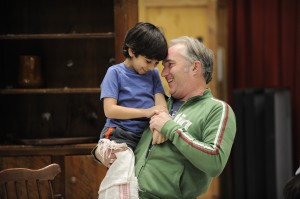 For all holiday events other than theater, dance and comedy, click here.

The Annoyance Christmas Pageant
The Annoyance presents a family-friendly Christmas show that retells “A Charlie Brown Christmas” and “Rudolph the Red-Nosed Reindeer” in a two-act play. Charlie Brown Christmas shadows a distraught young boy as he overcomes the commercialization of Christmas to discover its true meaning. In the second act, guests will be entertained by Sam the Snowman’s narration of how Rudolph runs away from home in a quest for independence with his friend Hermie. On their journey they meet a man searching for silver and gold, an island full of misfit toys and  a beastly snow monster. 4830 North Broadway, (773)561-4665. November 30-December 28, Fridays 8pm, Sundays 2pm. $18/Adults, $14/Children.

A Beer Carol
The bartenders read a live radio play reciting their rendition of “A Christmas Carol” that has to do with fear and beer. Evil CEO Bud Miller unpleasantly meets the four ghosts, who happen to be the ingredients in beer.  With hops, barley, water and yeast, Miller confronts his past, present and future before deciding how to become a better person (and brewer). Drinking and Writing Theater at Haymarket Pub & Brewery, 737 West Randolph. November 24-December 22, $15.

A Big Lebowski Christmas Musical: It’s a Wonderful Life, Dude
Cult classic meets timeless holiday favorite. The rock musical seeks to answer the question, what would life be like if the Dude never existed? Is This Your Homework? Productions also produced the first musical tribute to “The Big Lebowski” (2011’s “The Dude Abides”), which performed to a sold-out audience. Stage 773, (773)327-5252. November 24-December 29. $12.

Charles Dickens Begrudgingly Performs “A Christmas Carol.”Again.
Set in a warm and welcoming Victorian scene, the play reaffirms why the classic is so popular and gives insight to Dickens’ life. There is plenty of Christmas cheer in the play, featuring traditions and customs. It gives shape to Dickens’ life, his inspiration and his passion. The Building Stage, 412 North Carpenter, (312)491-1369. November 29-December 24. $15, $5/Students.

A Christmas Carol
The story of redemption, faith and love returns for its thirty-fifth anniversary this season. The Charles Dickens tale is a magical holiday performance complete with great ghosts and musical numbers. Goodman Theatre, 170 North Dearborn, (312)443-3800. November 17-December 29. $21.50-$57.

The Christmas Miracle of Jonathan Toomey
This play provides a deeper understanding of the Christmas spirit and the importance of love and kindness in building community. A boy loses his beloved wooden nativity that his dad gave him. His father dies, so his mother seeks help in building a replacement from the local woodcarver. The woodcarver Mr. “Gloomy” Toomey is bitter and crotchety, but his attitude changes when the little boy watches the woodcarver work. The Christmas miracle is the power of transformation. Provision Theater, 1001 West Roosevelt. November 21-December 23. $10-$25.

The Christmas Schooner
Board the first Christmas tree ship with the family who put their lives on the line to bring Christmas cheer to Chicago. The Mercury Theater, 3745 North Southport. (773)325-1700. November 23-December 30. $29-$55.

The Comedysportz Crew Meets the Snow Queen
Travel with the cast as they hop in the Imagination Machine and visit the Snow Queen. On their travels, they encounter a goblin who breaks a mirror that only reflects bad images, a Summer Sorceress who lives in a bubble of sunshine and warmth year round, a friendly reindeer and a married couple of crows. The play is a new rendition of the Hans Christian Andersen tale. 929 West Belmont, (773)549-8080. Saturdays, 11am, November 17-January 19. $10/Adults, $7/Children under 12.

Dr. Seuss’ “How the Grinch Stole Christmas!” The Musical
Irresistible tunes like “You’re a Mean One, Mr. Grinch” and “Welcome Christmas” will have you singing along. Max the dog narrates how the evil Grinch plots to stop the Who Christmas from coming, and how the Grinch learns the real meaning of the holidays. Cadillac Palace Theatre, 151 West Randolph, (312)384-1502. December 5-December 16. $18-$85.

Foreverendia
Three children, overcome with excitement after a blizzard transforms their neighborhood into a snowy scene, climb out of their chimneys and explore a new winter wonderland. The play is presented by the Black Ship Co. Athenaeum Theatre, 2936 North  Southport, (773)935-6875. November 15-December 23. $16-$24.

The Gift of the Magi
This classic serves as an uplifting reminder that the best gifts in life do not come from a store. Based on O. Henry’s holiday love story, the musical follows New York newlyweds Jim and Della who sacrifice their most cherished possessions to receive a greater gift.  Stage 773, 1225 West Belmont, (773)327-5252. November 17- December 23. $30.

Hellcab
The play, in a twentieth-anniversary production, documents a cab driver’s night on Christmas Eve as he picks up a number of strange customers and drops them off through the streets of Chicago. Profiles Theater, 4139 North Broadway, (773)549-1815. November 15-December 23. $30-$40.

It’s a Bieberful Life
Comedysportz’s spoof of the Christmas classic has a modernized twist: Justin Bieber’s career is struggling. He faces poor record sales and a bad reputation in the media after his scandals are exposed. Life looks bleak for the pop star, until a mysterious angel (think Robert Pattinson) visits. 929 West Belmont, (773)549-8080. November 16-December 29, Fridays at midnight. $10.

It’s a Wonderful Life: Live at the Biograph!
Step back in time and watch this timeless classic come to life as a live radio show by  the American Blues Theater. Expect Foley sound effects, audiograms, commercial jingles and an original score. Not to mention cookies. Victory Gardens Theater at the Biograph, 2433 North Lincoln, (773)871-3000. November 23-December 30, $19-$39.

James Joyce’s “The Dead”
Irish folk songs, a snowy night and a crowd of family friends are the ingredients to a memorable and moving Feast of the Epiphany in Dublin celebration. Court Theatre, 5535 South Ellis, (773)753-4472. November 8-December 9. $45-$65.

Madeline’s Christmas
Twelve little girls in two straight lines, under Ms. Clavel’s guidance, take a walk and visit the zoo. They head back to school for a French history lesson, but everyone gets the flu! With the illness spreading throughout the house and infringing on their holiday plans, Madeline jumps in to save the day. Theatre of Western Springs, 4384 Hampton, Western Springs, (708)246-3380. November 30-December 9. $12/Adults, $6/Children.

The Nutcracker
The House Theatre of Chicago wants you to join Clara in her journey to save Christmas. With her magical nutcracker sidekick, she defeats the rat king and rescues her family. The performance includes engaging dialogue, puppetry and original songs that create a magic, mysterious and moving night for the whole family. Chopin Theatre, 1543 West Division, (773)769-3832. November 18-December 30. $25.

The Other Cinderella
Black Ensemble Theater presents the thirty-sixth annual fairy tale with an Afro-centric twist. Each year, new surprises are added to the plot to create a work that has evolved since it first hit the stage in 1976. Black Ensemble Theater, 4450 North Clark, (773)769-4451. November 23-January 13. $55-$65.

The Santaland Diaries
Mitchell Fain  stars in the hilarious story of David Sedaris’ experiences as an elf at Macy’s, finding the humor in even the worst situations. There is a silver lining, even if it’s just the ability to laugh at unemployment, the craziness of Christmas shopping and the commercialized holiday spirit.  Theater Wit, 1229 West Belmont, (773)975-8150. November 23-December 30. $24.

The Second City’s Nut-Cracking Holiday Revue
The holidays should be lighthearted and merry; spare a few laughs about family gatherings, clueless couple gift exchanges and last-minute shopping at this original twist on the traditions we celebrate. 1616 North Wells, (312)337-3992. Through December 30. $23 weekdays/$28 weekends.

Sherlock Holmes: the Case of the Christmas Goose
Adapted from Arthur Conan Doyle’s “The Adventure of the Blue Carbuncle,” the radio play features Holmes and Watson’s hunt for a missing jewel. Join them in cracking the mysterious case, which ends with finding the gem stuffed inside the Christmas goose. The play contains live music and an audience sing-along. Raven Theatre, 6157 North Clark, (773)338-2177. Weekends, December 14-December 30. $15-$20.

Tidings of Tap!
There’s a new beat on the street. This tap performance is a refreshing twist on old favorites. Tap dancers click their heels and tap their toes to interpretations of Christmas, Chanukah and winter songs. University of Illinois Chicago Theater, 1044 West Harrison,  (773)655-1175. December 12-14. Adults/$30, Seniors/$23, Student/Dancer/$18.

We Three Lizas
Conrad Ticklebottom vies to be the best in the business, so with the aid of his assistant Reggie they beg the Great Queen of Wishes to be granted the triple threat: youth, beauty and wealth. He should have been careful with what he wished for; Liza Minnelli arrives at Conrad’s door with holiday presents and his world is rocked. The performance has a forty-five-minute cocktail “hour” featuring opening acts and guest performances. Steppenwolf Garage, 1624 Halsted, (312)335-1650. November 30-December 23. $25.

The Winter Wonderettes
Sit back and enjoy the sounds of the sixties as Cindy Lou, Missy, Suzy and Betty Jean take center stage. After organizing the holiday party, Betty Jean and her swinging singers are challenged to keep the holiday spirit alive when Santa goes missing and the staff mistakenly gets fired on Christmas Eve. Fox Valley Repertory, 4051 East Main, St. Charles, (630)584-6300. November 15-December 30. $32-$42.