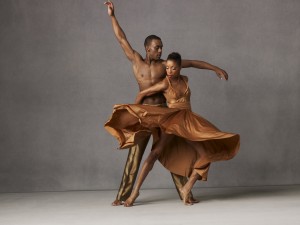 “There was such a great energy in the theater; the performance was so magical, ” Antonio Douthit says about dancing for President Barack Obama and his family earlier this year.   The young dancer from St. Louis has been with Alvin Ailey American Dance Theater (AAADT) for five seasons now and from the time he signed his contract he has been living dream moments like this one.

AAADT is celebrating its fiftieth anniversary through 2009.  Since its inception, the company has become one of the most recognizable names in American dance. A U.S. Congressional resolution recently recognized the institution as a vital “American Cultural Ambassador to the World.” Barbie  even got into the action this year with the first doll inspired by a dance company. Generations of young people, specifically young African Americans like Douthit, have grown up with the solitary dream of one day joining the company of modern dancers known for their strength , athleticism and grace.

“I knew this is where I wanted to be when I started dancing,” Douthit says.  He was 16 and performing at a school dominated by young white girls when he remembers discovering AAADT. “I was taken to a whole other place I never thought dance could go.  I had never been around a group of men that performed like men and looked like men and that was something I wanted to do.”  And so go the dreams of young artists all over the country.

Now Douthit finds himself on a fifty-city U.S. tour celebrating a golden anniversary.  This week is stop fifteen, five days at the Auditorium Theatre.  With an ambitious series of programs, AAADT will be dancing pieces that range from the company’s iconic centerpiece, Ailey’s “Revelations,” to contemporary work like that of Robert Battle’s “Unfold.” In addition, Chicago will get a first chance to see company member Hope Boykin’s “Go in Grace,”  a collaboration with Grammy Award-winning female a capella ensemble Sweet Honey in the Rock.  The ensemble will accompany the dancers live on stage opening night.  Though the dancers are not even to the halfway mark of their marathon tour, it is bold programming like this that keeps them invigorated.

“We get tired.  It is the organization that keeps you going,”  says Douthit.  “I feel like we always give dance back to the community. Dance is so accessible on television and the Internet, people are learning more about the company than they ever have before.  He [Alvin Ailey] would be so thrilled that his dance is for everyone.” (William Scott)