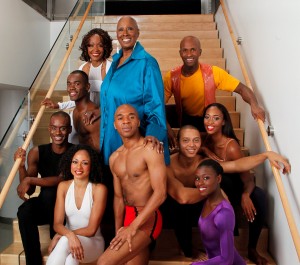 For two decades, Judith Jamison has sat at the helm of Alvin Ailey American Dance Theater, staying true to the company’s mission of celebrating African American heritage while expanding the diversity and artistry of the company’s repertory. This year, the twentieth anniversary of Jamison’s role as artistic director, she will hand the reins of the legendary company to a yet-unnamed successor. The program this weekend at the Auditorium Theatre celebrates Jamison’s vision and her considerable contribution to the richness of the AAADT repertory. The centerpiece of the program is “Best of 20,” a collection of excerpts from thirteen pieces commissioned or revived by Jamison, choreographed by a diverse cross-section of talent, from heavy-hitters like Lar Lubovitch and Ronald K. Brown to emerging artists. Jamison’s “Love Stories,” a collaborative effort with Robert Battle and hip-hop artist Rennie Harris is also on the program, along with her new work “Among Us (Private Spaces: Public Places).”

The evening opens with a new piece by veteran company member Matthew Rushing—a jazz-fueled tribute to the Harlem Renaissance. Jamison invited Rushing to contribute a piece for her twentieth-anniversary tour, so he hit the books at Harlem’s Schomburg Center for Research in Black Culture. “As I got deeper into the information I discovered many things I didn’t know about the era—things I’m embarrassed not to have known,” Rushing says. “I felt I had a greater responsibility to put the information out there, especially to my generation.” Rushing focused on three bywords whilst choreographing “Uptown”: entertaining, educational, authentic. In the interest of the latter, Rushing worked with Clyde Wilder, a protégé of lindy-hop legend Frankie Manning.

“In my opinion, this era is the beginning of pop culture—a huge craze took over America, started by jazz music,” Rushing says. “It’s amazing to look back and see how artists wouldn’t be who they are today without Josephine Baker, Fats Waller or Satchmo.”

When asked his feelings about Jamison’s retirement as AD, Rushing spoke immediately about her powerful influence on his own artistry. “Working with her is challenging beyond belief,” Rushing says. “She sets an incredibly high standard—as soon as you reach it and feel a sense of accomplishment, it’s set even higher. Under that leadership, if you’re in the right mindset, you come out ten times better than you came in. The dancer and artist that I am is because of her leadership. It’s hard to hear that she’s making a move, but she will still be around the organization, and I think that sets us at ease. She will be in an emeritus position and her presence will still be felt.” (Sharon Hoyer)