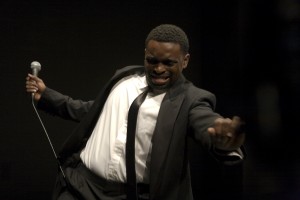 Playwright-director Young Jean Lee brings one of this spring’s most anticipated shows to the MCA this week: “The Shipment,” a subversive minstrelsy performance that’s in keeping with her history of experimental, confrontational plays about racial identity. What’s different is that where previous shows about race centered around stereotypes of the Korean-American experience Lee identifies with, “The Shipment” addresses African-American identity politics, presenting cultural images of Black America through various sketches, dance, stand-up comedy and drama.

We spoke with Lee about seeking discomfort, avoiding irony and bringing her ever-changing and highly praised show to Chicago.

“The Shipment” has gone through several adaptations after what you’ve described as “unsuccessful workshops.” Has it continued to change?

We’ve continued to tweak the show based on where we are in performances, from Carolina to Europe… We actually had to make a major change in touring the show in Europe because in the first shows the audience thought the play was about how backwards Americans are for having race problems—one more quaint story of American stupidity—with the idea that Europe doesn’t have race problems. We had to add in a long paragraph making clear that they were implicated too.

That kind of denial is fascinating. In thinking about bringing a minstrelsy piece to Chicago, the first thing that comes to mind is the Wooster Group’s “Emperor Jones,” which was critically acclaimed here but, speaking anecdotally, a number of audience members seemed profoundly confused and disturbed. Do you worry about the subversiveness of “The Shipment” being clear to audience members?

Well, I honestly think it’s very different. I actually had the Wooster Group in mind when making the show, and of course the problem they run into is that [Kate Valk] is actually performing it the way the stereotype was performed. We’re really hitting our audience over the head with the position we’re putting forth, and I think there’s no way you could mistake “The Shipment”for any kind of simple minstrel show—structurally it resembles a minstrel show, but that’s it.

You’ve been called polemical, a provocateur, and your plays have been described as parodies and farces, but irony might be the most commonly attributed word for your work. How many of these descriptors do you think are appropriate; how many do you want to own?

I like that question. I don’t really think of my work as being ironic, although I’m sure it is at times… I’m generally sincere. The labels don’t bother me because I feel like people are always going to find ways to put words to what they see in the work. At heart, I see what I do as basically just trying to find different ways of sneaking around audience defenses. The biggest defense is “I’ve seen that before, I know what that is,” and that’s what I’m fighting most… we found even in rehearsal that when somebody would fully embody a stereotype we would laugh, we feel relief in that, pleasure in that, so we were careful about actors never going to that place. We don’t want to repeat something and call it a critique… everything is carefully calibrated to be weird and disorienting. 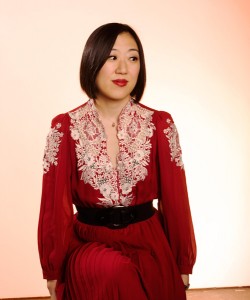 You’ve said that when you start a play you ask yourself, “What’s the last play in the world I would ever want to write” and then you make yourself write it. What is that like?