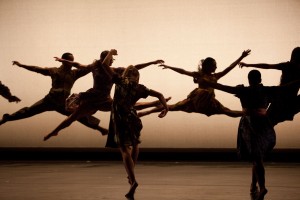 Three years ago Eduardo Vilaro stepped away from Luna Negra Dance Theater, the Chicago company he founded ten years before, to return to New York City and take the helm of Ballet Hispanico. Vilaro spent his childhood in New York and danced with Ballet Hispanico early in his career. This month he brings the company to Chicago to perform at the Dance Center of Columbia College, where he learned, taught and served as artist-in-residence.

Along with a new work by Vilaro, the program includes “Espiritu Vivo” by Ronald K. Brown, inspired by the intersections of African and Latino diasporas, “Naci” by Andrea Miller about Sephardic Jewish culture in Spain, and a piece on the greater human condition by the inimitable Annabelle Lopez Ochoa. I spoke with Vilaro via phone, catching him in New York between tours.

Three years in, how does it feel to be leading the company you once danced with?
It’s surreal; I walk in the door feeling like I’m going to rehearsal, but no, I’m leading rehearsal. It’s a much larger organization now with more studios. In New York that’s a luxury. It gives me a lot more opportunity to work with the community and the dance community. We have our rehearsals, we have Broadway rehearsal rentals, fabulous dance companies from the Trockaderos to Martha Graham, so I’m constantly interacting with these amazing artists.

How has the transition been as the first artistic director of Ballet Hispanico after Tina Ramirez?
It’s a union company so there are rules you have to adhere to. Now that I’m at the three-year mark the company is now my dancers, if I can say that. That’s not proprietary or disparaging to the previous dancers, these are the people who are with you and what you’re trying to do.

Tell me a little about your new piece, Asuka.
It’s a tribute to the music of Celia Cruz. The work is non-narrative, it’s a reflection of how she touched Latino lives she held together. She was a glue for the Latino community—Puerto Rican, Cuban—everyone agreed she is the queen of Salsa. And she was never allowed to go back to Cuba; when her mother passed away, Castro didn’t allow her to return for the funeral. She became an icon for the immigrant experience. (Sharon Hoyer)