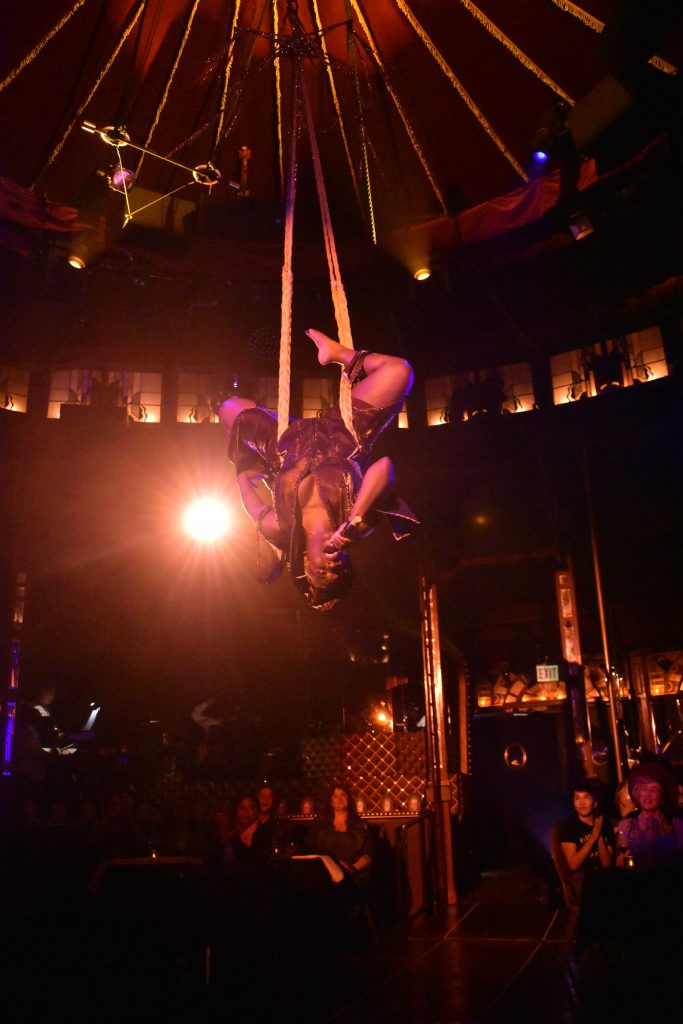 There was this moment, perhaps two-thirds of the way through my night at Cabaret ZaZou, when I started thinking about heaven. As a lapsed Lutheran, I don’t think about the afterlife, well, ever, but the thought popped into my head that if there was a heaven, it could not be better than this. The Luminaire experience—which is more than a show, since it also incorporates dinner and accordingly sings to all five senses—manages to combine elements of comedy, live music, acrobatics and all-around spectacle and to do so in a fresh rather than corny fashion. You can thank the world-class ensemble of entertainers, drawn from all around the world for this, led by the emcee, Frank Ferrante, who became a local star for his similar role in Teatro ZinZanni, the predecessor to Cabaret ZaZou. “Luminaire” is a modern-day version of vaudeville; 1940s New York supper clubs like the Copacabana and El Morocco; and the television variety show that ruled the airwaves in the 1950s and 1960s, all rolled into one. While part of the charm is the way the acts unfold and surprise you, it’s not too much to reveal that in addition to the impeccable comedy of Ferrante, that the soulful band led by Chuck Webb and the two singers—Liv Warfield, the “chanteuse,” who comes from the world of Prince, and James Harkness, who channels equal parts Usher and Curtis Mayfield—wraps around a series of short but amazing physical acts that will have you recalling the best parts of Cirque du Soleil. (In fact, the unbelievable contortionist Ulzii Mergen got her start at the Cirque at the age of nine.)

Set in a visually dazzling vintage Spiegeltent constructed on the fourteenth floor of the Cambria Hotel, the waitstaff performs in their own right, sometimes supporting the show, sometimes simply executing the derring-do deeds of delivering plates or cocktails while ducking acrobats flying overhead and weaving in and out of the crowd on a split-second break in the action. The food, a four-course dinner, while not Michelin-star material, is far better than average, especially considering the incredible synchronization required to serve it on cue. The cocktails, though not included in the prix fixe (you can also skip the meal and just see the show), are adventurous as well, and definitely help you reach the state of euphoria that I did. Speaking of which, I know my evocation of heaven is embarrassingly over-the-top, but it really happened. And how much did I love the show? We bought tickets and went back again with a family group a week later. And I never do that.