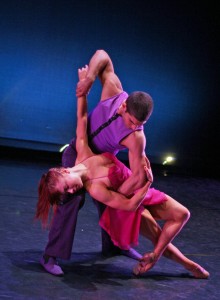 Frank Chaves’ jazz-based company dances beneath the golden proscenium of the Auditorium Theatre for the first time thanks to a co-commission by the Auditorium, Michigan State University and the Wharton Center as part of their ongoing, primarily musical-performance-focused Miles Davis Festival. Chaves has created a suite of dances to four famous tracks from “Kind of Blue,” “Workin’ With The Miles Davis Quintet” and “Bitches Brew”—iconic recordings that should provide a familiar aural landscape for Chaves to create his particular brand of dramatic, romantic and crowd-pleasing choreography. Six more pieces fill out the program: three from Chaves, including a duet to Etta James’ “At Last,” one from former River North co-director Sherry Zunker, one from Alvin Ailey dancer and soon-to-be-director Robert Battle, and a solo from Portland-based Ashley Roland. (Sharon Hoyer)