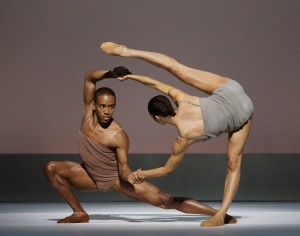 In his third year at the helm of Alvin Ailey’s renowned troupe, Robert Battle has admirably continued to honor the tradition and ethos of the company while challenging its boundaries with relevant and unexpected new works. The new pieces presented in Ailey’s two-week run at the Auditorium Theatre strike a complementary contrast in both aesthetic and approach. Wayne McGregor’s “Chroma” is a sleek, high-speed, minimalist ballet demanding contortionist flexibility and razor-sharp precision. Contrast that to Aszure Barton, who didn’t begin choreographing her commissioned “LIFT” until she had met and observed the dancers for a few days in the studio. Both music, by Barton’s collaborator Curtis Macdonald, and the joyful choreography were built for and inspired by the dancers. The program also includes “D-Man in the Waters” by the brilliant Bill T. Jones, “Four Corners” from Ronald K. Brown, as well as a collection of Ailey signature pieces set to music by Duke Ellington. And of course each evening closes with “Revelations.” (Sharon Hoyer)