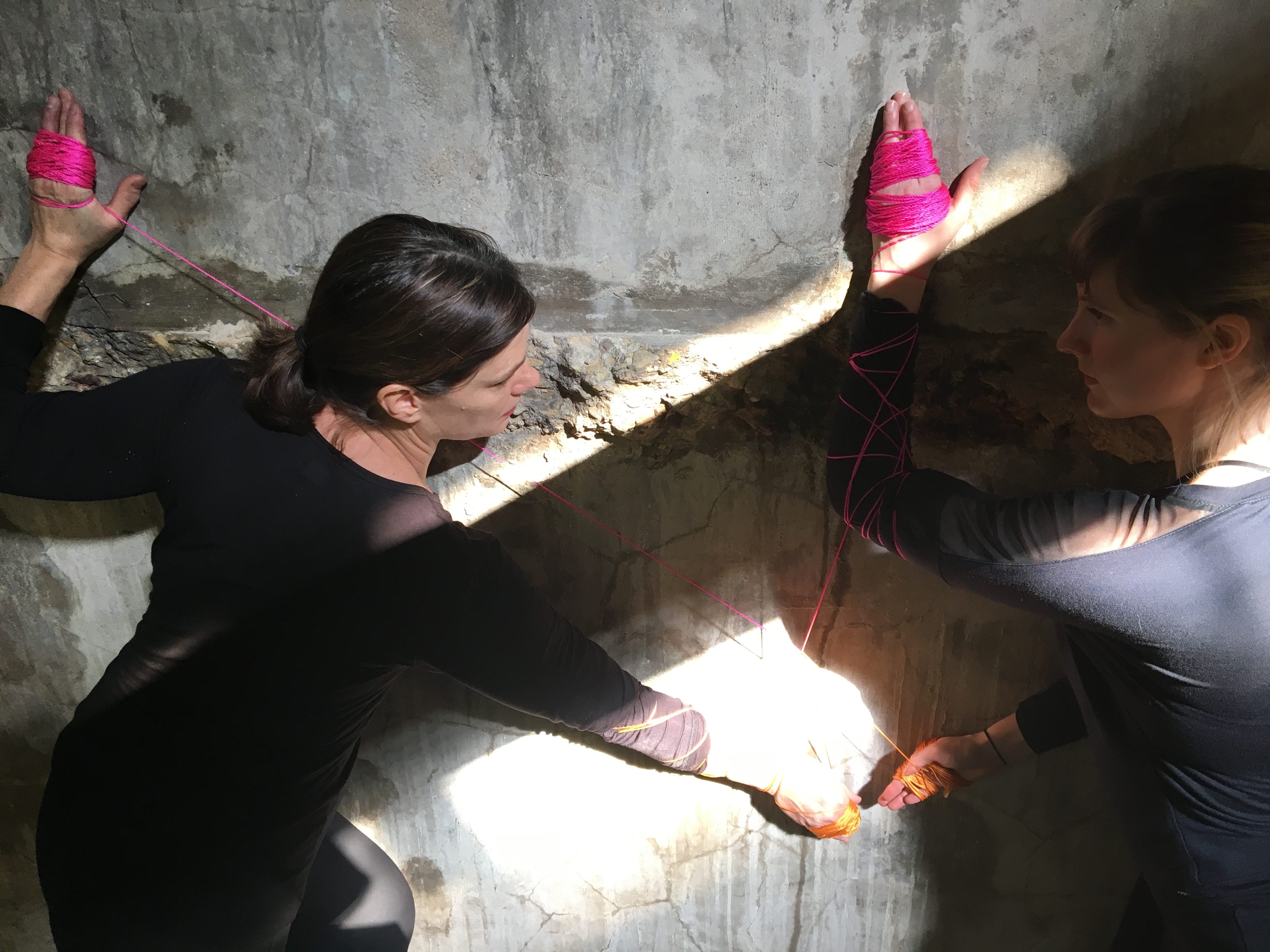 Shadows Across Our Eyes/Photo: Cristina Tadeo

After years of collaboration, the dance-architecture duo of Michelle Kranicke and David Sundry see their efforts culminate in the soft opening of an artistic laboratory for work that defies definition. They’re calling it SITE/less, as in without specific location, or having a definition based on siloed disciplinary expectations. Rough and ready, the space is in the spirit and tradition of 1990s music club Lounge Ax or early Hyde Park Art Center.

SITE/less is housed in the industrial area near Noble Square, at the east side of the Kennedy expressway. We walked along the porous, weeping concrete retaining wall to talk about making art audiences won’t recognize, and what that means for tracing new dance and art cultural memory.

So, this place feels like the middle of nowhere, but it’s just east of Ukrainian Village. Is this place an attempt to make a version of the old Links Hall when it was in Wrigley?

David Sundry: You’ll see people still throw their garbage out, but ten, fifteen, twenty years ago, people might have a whole dump truck filled with construction debris and dump it all in the road. It’s a little like a bat-cave highway.

Michelle Kranicke: I don’t think there’s a space like it in Chicago, [one] that is dedicated to experimentation and incubation [this way]; I think about economics and how everyone is trying to make everything digestible and palatable to an audience. They’ll put in language or they’ll bring in other people and make it dance theater or multidisciplinary in some way with the hopes that the crossover will allow for some semblance of understanding. I understand it, but what I think that does then is it can erode, really, some basic elements of the art form. One thing Dave and I always talk about is how this will be a research incubator kind of space, but it’s not going to be a place where we will all come together happily in a sandbox. You can play happily up to a point and then your edges kind of move and butt in against each other, and you’ll have to make some compromises. Even in dance and architecture, which is our collaboration, we’ve found where dance needs this and architecture needs this, so we’re having this little standoff philosophically. So we’re trying to figure out, “Okay, how do we preserve the integrity of the form?” but then also find this little in-between gap where we can both exist.

DS: Yes, we want to avoid this sloppy utopian version of “Everything’s working, everything’s successful,” just because you say it’s going to happen.

There’s a lot of bad art, rooted in navel-gazing, inside-joke work that’s not about anything but itself. But I also take your point about audience-pandering.

MK: The other day we were talking about postmodernism. Everybody’s like, “Oh, postmodernism [in dance],” to the point where, as Dave was saying, people forget that postmodernism was a pushback against modernism and now, that’s all people are being schooled in and so now the groundings and historical tenets of what was being pushed against are forgotten, so it’s this diluted form that makes seeing and watching the progression of different forms unsatisfactory.

So, how do you see the programming coalescing?

MK: I feel flexible on that, but in addition to the soft opening, Joseph Ravens at Defibrillator and I are going to co-curate and do a movement-for-camera, dance-for-camera festival in the fall because he’s moved down to Zhou B, so it makes a nice north-south thing. Somebody we’re talking with does social practice fashion, so I could see this place filled with sewing machines for an event.

DS: We started out with these ideas.

MK: People might come for a lot of different things, but the anchor-point idea is mature, rigorous thought behind what’s going on.

Half the new art spaces that open up, their mission statement says “established and emerging artists,” which of course means exactly nothing.

MK: In order to put something out that has gravitas and depth, it requires thinking. Long thinking, longform thinking, and I feel like that, especially with dance, hasn’t been at the forefront. As a purely pragmatic thing, this space for me as an artist and performer is—I want to have a place that is a permanent place for me to produce work that is interesting and inspiring and while Zephyr’s paying a monthly rent here, I don’t have to figure in renting a theater or venue.

DS: And the other thing is, with the increasing nature of the collaboration, the things we’ve wanted to do and we’ve wanted other people to participate in, you can’t rent another guy’s space at those rates for six months.

MK: That’s one of the major reasons, for instance, when we set up those cinderblocks at Defibrillator—for Valise 13, several hundred cinderblocks had to be hauled in and out of the space in a weekend—people were like “How long is this staying up?” And it was like, “Oh gosh, just until tomorrow.” So, it’s also interesting, from our standpoint, where we get to invite other artists to come and interact with the architecture as well.

I think anytime you can move away from this commodity-centric, art world idea in any way and drag that kicking and screaming into other disciplinary areas, that’s a good thing.

MK: Oh, it’ll be kicking and screaming all right.

MK: That has been frustrating these past few years. I see the art of dance moving into this road that’s being populated because they think that’s what the audience wants to see and it’s digestible and therefore then they’ll get money because, “Okay, I see if I use some language then I’ll know what your piece is about and therefore, great I’m so glad I get it.”

DS: And that maybe serves their social and political check-box and they’re not going to get any pushback. There’s a PR value they’re getting and there’s a kind of vetting they have to do first. But as artists, you can choose whether or not that’s the only way you’re going to make work.

MK: Right. I think it’s this American thing, to shy away from any work with a sense of ambiguity or ambivalence, and that’s really too bad, because that’s what I think art is all about.

SITE/less, 1250 West Augusta, on the east side of the Kennedy expressway. will host its soft opening with a premiere of “Shadows Across Our Eyes,” new movement studies by Kranicke and Molly Strom, April 26-May 5, Thursday-Saturday at 7:30pm, $15. Tickets at zephyrdance.com.