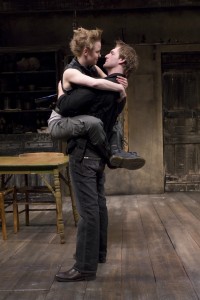 I remember reading Martin McDonagh’s “The Lieutenant of Inishmore” when it was first published several years ago and thinking that it was the kind of play that Quentin Tarantino might have written had he been a playwright.  I still think this is partially true, at least for the part of the play that demands mutilated pussy cats, human craniums splattering open and onto walls and the severing of human bodies into small pieces, all of these disturbing stage directions simulated, of course, but nonetheless staged convincingly in Theatre Northlight’s perversely enjoyable new revival of the play.  On opening night I couldn’t decide what was more entertaining, watching the performance or keeping my eye on the woman sitting one row in front of me, looking pissed and uncomfortable as she kept flashing a “why did you bring me to this?” angry gaze to her male companion.  Unfortunately for him, she was probably a cat person or card-carrying member of the Anti-Cruelty Society.

After all, the cats that figure into this blackest of black comedies aren’t the ones that frolic and sing to Andrew Lloyd Webber tunes about which one of them is going to kitty-cat heaven.  In “Inishmore,” four Northern Irish terrorists butcher the beloved black cat (Wee Thomas) of their adversary Padraic, a man so violent and unpredictable even the IRA rejected his membership application, in order to lure him back into town.  Padraic, in the middle of torturing a drug-pusher—Padraic’s ripped off two of his toe nails and is negotiating with the man on which nipple he should cut off next—receives the news and rushes back home.  Meanwhile, Padraic’s nervous father—having misled his son about Wee Thomas’ demise and fearing his son’s violent wrath—kidnaps an orange cat and begins applying black shoe polish to its coat in order to pass him off as the real thing.  To reveal any more would be to spoil a large part of the feline foul play and fun that ensues, but suffice it to say that by the end the stage is soaked in buckets of blood (the stage management must hate their jobs right now) and a brilliant twist in the end prompts one character to ask if all the violence was for naught.  Yes is the answer that follows, making clear this maverick playwright’s brave critique of his country’s extremists, as well as his condemnation of their violent methods.  In other words, at the heart of every macho terrorist that blows up human beings for a living is a mawkish and sentimental idiot, and all that fighting really is for nothing.  If Tarantino’s films rarely had a point to their gratuitous gore, McDonagh’s stomach-curling violence is ultimately used to make a conservative and pacifist one.  What’s the Gaelic word for brilliant?

Director BJ Jones knows the secret to diffusing any possible repugnance to the play’s violence by carefully calibrating his actors’—and their characters’—deadpan delivery of McDonagh’s hilarious and ironic lines with a little mix of mirth and humor, ensuring that most moments end with a chuckle rather than a nauseous convulsion.  And while the piece is truly an ensemble effort, Cliff Chamberlain as the mad Padraic—whom last I enjoyed wielding his brawn and comic timing in Next Theatre’s “The UN Inspector”—stands out and deserves every critical accolade I hope he receives.  I’d like to see the Northlight blue-rinse set try to snooze through this one. (Fabrizio O. Almeida)