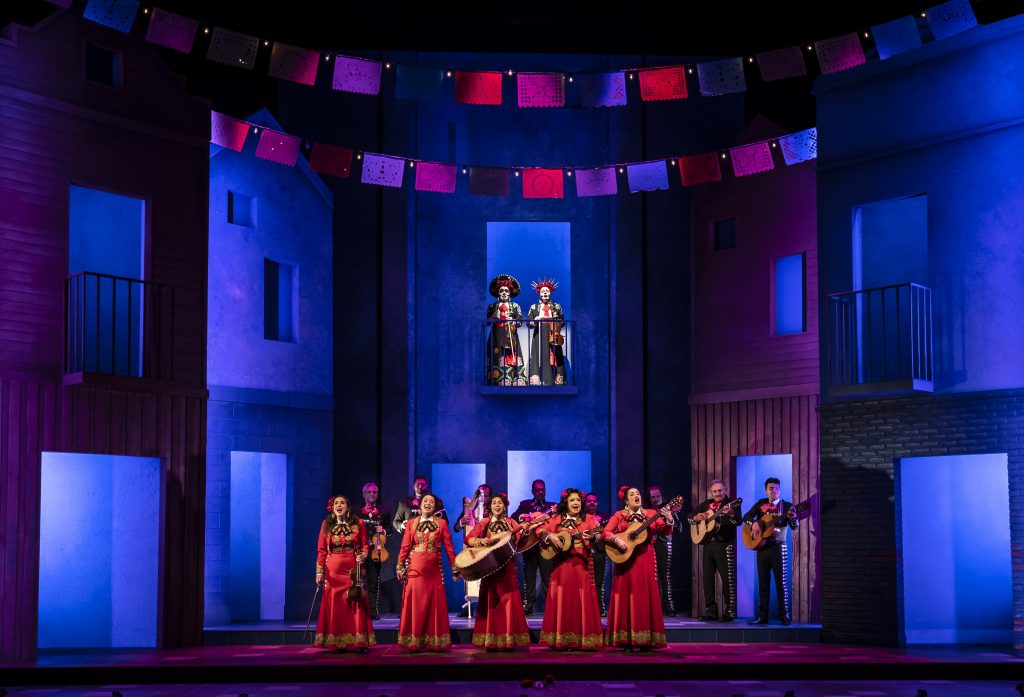 That the story arc is sentimental and predictable, in a musical theater kind of way, and that conventions of musicals, like overdramatized emotions and over-the-top stereotypical characters (as in René, the flamboyant costume designer), are deployed should not dissuade you. “American Mariachi” is ninety minutes of musical joy.

Set in the mid-seventies “in a Chicano community somewhere in the United States,” playwright José Cruz González’s story is American in name only—the characters, the settings and themes are all Mexican, with only the blending of English and Spanish dialogue to indicate this is the story of immigrants living in a very insular place within their new country. When twentysomething Lucha discovers that her mother Amalia, who is disappearing into the fog of early-onset dementia, responds to a recording featuring her mariachi father Federico, she sets out with her cousin Boli to create an all-female band in order to recreate the song for her mother. The backdrops of second-wave feminism and the exclusive male domain of the mariachi in the seventies propel the story along its predictable path.

Predictable perhaps, but that path is filled with matters of love and heartbreak, of the consequences of machismo pride, of familia and the melancholy character of memory—themes echoed in the mariachi music that fills the show. For as topnotch as the ensemble cast is under the direction of Henry Godinez, mariachi is the star, performed here by Chicago’s legendary Sones de México Ensemble. For American audiences whose exposure to mariachi can be burdened with stereotypes, the exposition that explains some of the music’s tradition and technique is compelling.

The scenic and lighting design, by Linda Buchanan and Maria-Cristina Fusté respectively, evokes a Spanish-style plaza where mariachis, as well as the calavera of beloved Tia Carmen, appear and perform the music that punctuates everything appearing in the settings within its frame.

In most musicals, songs push the story to its ultimate destination; here the music is the destination.

At the Goodman Theatre, 170 North Dearborn, as part of Destinos: Chicago International Latino Theater Festival, through October 24. (Full disclosure: A cast member, Molly Hernández, had a small part in the cast of a film Newcity produced, “Dreaming Grand Avenue.”)