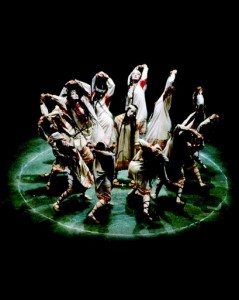 From the opening notes of the 1913 world premiere of Stravinsky’s “Le Sacre du printemps” [“The Rite of Spring”], there were catcalls due to the audience’s inability to recognize what instrument was actually being heard (a bassoon, a low-pitched instrument by nature, forced to the unnatural upper extreme of its range). By the time the work’s infamous repeated dissonant chord came in and the curtain opened to an encircled group of dancers with long braids, painted faces and long smocks all stomping wildly on the floor and breaking every convention of classical ballet, the audience became more and more audibly agitated until a full-scale riot finally broke out in the theater mid-performance, complete with fistfights in the aisle. Impresario Serge Diaghilev had told conductor Pierre Monteux to keep the performance going “no matter what” and Stravinsky himself had already retreated backstage where he was holding on to the coattails of dancer and choreographer Vasalav Nijinsky, who was shouting out the counts to the dancers because the music could no longer be heard amongst the chaos.

Fast forward ninety-six years later when choreographer and dance reconstructionist Millicent Hodson is taking a group of Joffrey Ballet dancers through those same revolutionary paces during an intense day-long rehearsal at Joffrey Tower. “That’s it,” she shouts, “cupped hands. Reach.” Two pianists are pounding away a dizzying array of notes to a conductor with his head in both Stravinsky’s orchestral score and the four-hand piano version; the orchestra itself, which has its own rehearsal schedule, will not be combined with the dance element until the dress rehearsal.

Was it possible, Hodson pondered, to do some detective work and attempt to reconstruct what those first steps had been? One valuable ally in the process was none other than Robert Joffrey, whom Hodson had first met when she was an undergraduate in 1971. “We had a long talk about the piece, and many other things,” Hodson recalls, “and he was intrigued. ‘Call me when you have something,’ he said, ‘and make sure that I am the first.’” From the beginning, Joffrey recognized the immense importance of such a reconstruction and wanted his company to be in on the ground floor.

Hodson’s detective work meanwhile became more and more diligent, one puzzle piece after another gradually coming to light and fitting together piece by piece, among these being Nijinsky’s sister Bronislava Najinska, who had danced the piece, and his assistant Marie Rambert, both meticulous eyewitnesses to the preparations. Another gold mine was getting Stravinsky’s assistant Robert Craft to share a photocopy of Stravinsky’s own score from the premiere preparations with the composer’s own annotations from rehearsals.

The reconstruction, which by now included equally detailed re-creations of the costumes and sets by artist Kenneth Archer, who became Hodson’s husband along the way of their shared journey, received its premiere by the Joffrey Ballet in 1987, just a year before Joffrey’s death. “He was already ill,” Hodson recalls, “but was so excited.” A documentary on the reconstruction process was prepared and an entire Joffrey performance filmed, which was widely shown on PBS for a time but which has remained unavailable on DVD due to union restrictions, although Hobson is grateful that, as she puts it, “It remains one of the most widely pirated videos on the planet.”

Meanwhile, Chicagoans will have a rare live chance to experience the fruit of Hodson’s long quest to reconstruct a revolution as part of the Joffrey’s Winter Program as a centennial salute to the Ballet Russes that spawned “Sacre” and other monumental dance works from 1909 until Diaghilev’s death in 1929.