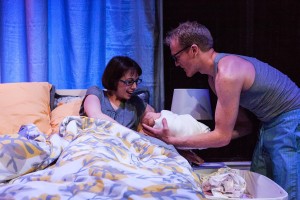 “You’ll have plenty of time to hold her tomorrow. You’ll have the whole rest of your life.”

So says brand-new daddy and eager-to-sleep husband Peter (Gabriel Franken) to his excited but exhausted wife Mari (Hillary Clemens) late on the eve of the birth of their first child. After a few minutes of doting indecision and loving worry, their newborn baby daughter (delivered at home by a midwife only two hours earlier in a big blue Birth Pool in a Box a few feet away) is carefully put to rest in a bassinet next to their bed, where she will lie safely till morning. Maybe.

Clemens and Franken adeptly capture the heady mix of emotions that confronts every new parent in these first life-changing hours after the birth of a child: the deepened connection with each other along with the overpowering feelings of love, concern and protectiveness that now connect parent and child. And in Laura Marks’ troubled and troubling “Mine,” currently receiving its Chicago premiere at The Gift Theatre, the young couple has more than just the uncertainty of first-time parenting to be concerned about.

When the couple abruptly awakens the next morning, Peter makes a mad dash out the door for a make-or-break investor’s meeting for his software startup, while Mari delicately peeks over at their sleeping baby. And this is the moment that the new-parent idyll is officially broken: gasping in disbelief, Mari screams out, “That is not our baby!”

Convinced that her baby has been stolen and replaced with an imposter, Clemens makes Mari’s deep-seated fear (and eventual guilt) so palpable it’s easy to root for her. She’s an ostensibly rational new mother faced with an incredibly irrational circumstance, and assurances from those around her only make her fear stronger.

Peter is dismissive, determined that Mari is mistaken. And both her seemingly helpful midwife (Alexandra Main) and sympathetic mother (Deborah Ann Smith) express concern for her sanity, recommending medication while citing hormonal imbalances and postpartum depression. Only Amy, a mysterious fellow mother she meets in the park (an unfortunately miscast Cyd Blakewell), has anything potentially helpful to tell her. Though Amy’s input may be the most damaging of all. 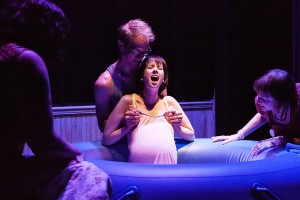 Marks’ tale uses the changeling legends of Irish folklore—in which faeries would swap newborn humans with faerie babies—as a jumping-off point for her psychological thriller, but her contemporary script is strong enough that she could stand to jump farther away from this initial inspiration. The changeling concept involves an awkward amount of mid-show exposition and a stilted research scene, which slows things unnecessarily when we’ve already wholeheartedly bought into the creepy premise.

Through Mari’s actions and difficulties, Marks asks us to walk the tenuous line between accepting impossible revelations and standing firmly with the tested tenets of reality. Director Marti Lyons stages all but a few key scenes (and the dreamlike scene changes) with a firm foot in the world of realism, aiding in our (and Mari’s) fight for sanity to prevail.

As the tension builds, the imposing black walls of Stephen H. Carmody’s otherwise inviting set (a haunting juxtaposition) begin to feel closer and closer, with this well-paced eighty-minute horror story slowly advancing toward its rather explosive finale. And though Clemens and the rest of the cast imbed this heart-wrenching finale with a distressed determination, it’s Marks’ script that can’t quite support itself to the end, with a coda that undermines the delicate balance of psychological uncertainty the play has worked so hard to build. (Zach Freeman)