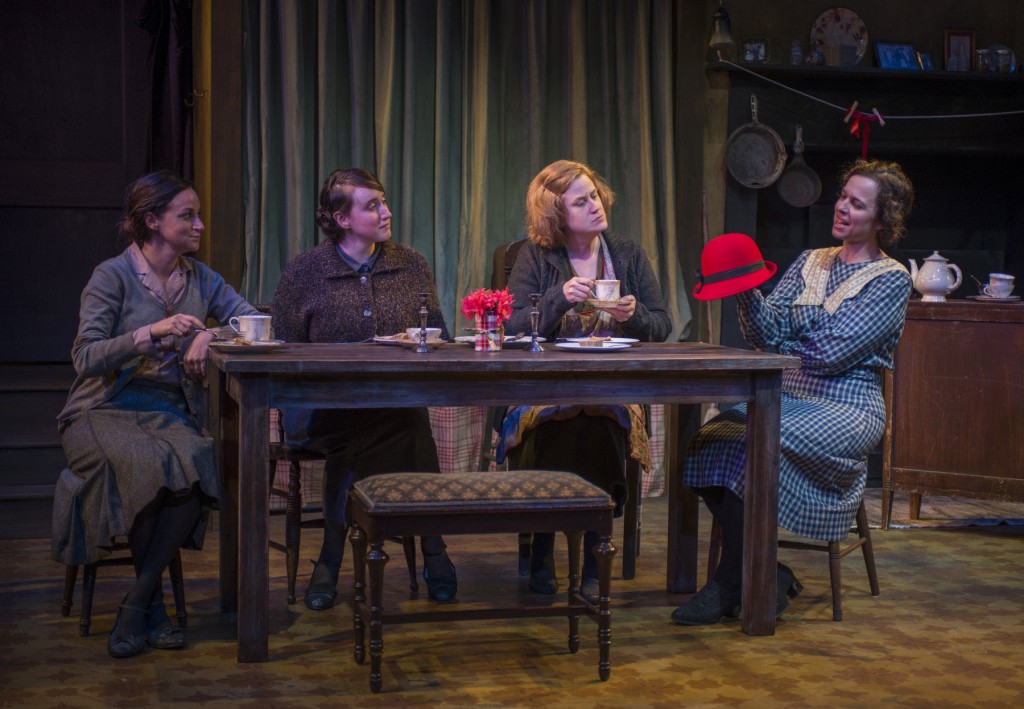 It’s been thirty years since Ena Lamont Stewart’s “Men Should Weep” was last produced in the USA and I’d wager a rampant run of Stateside revivals is unlikely. It’s steeped in a thick working-class Glasgow dialect. Despite its standing as one of “One Hundred Plays of the Century” per the National Theatre of London’s take on the twentieth, this far into the twenty-first the show offers nothing audiences haven’t seen. And the whole thing clocks in closer to three hours than two. But Stewart’s script provides a showcase for a fine ensemble and that’s exactly the sort of cast Griffin Theatre Company has assembled.

From the title you might think the men keep their softer emotions under wraps, and you’d be half right. While downtrodden dad John Morrison checks his sadness for most of the play, his son Alec (the other main male) is a weepy, pathetic, despicable crybaby. They’re both quick to raise their hands in anger, though. Among the many societal concerns addressed here by Lamont Stewart, the meaning of masculinity is of high importance. While the elder Morrison often struggles with that demanding breadwinning duty of traditional manhood and his view of women is typically condescending for his era, John does exhibit strength and an unshakable sense of responsibility. Alec, conversely, fails as a man and by any measure of humanity. He’s helpless, cuckolded, shiftless and alternately groveling and physically abusive to his wife Isa. If there’s any mystery, it’s how John and his saintly wife Maggie have raised such a wretch. Times are tough for men and women in this Depression-era tenement, but only Alec and his selfish, dishonest, cruel wife are utterly vile.

Aside from father and eldest son, the focus is mostly on women, in particular heavily burdened mother Maggie who gets quicker to lose her temper as the tough times get tougher and her husband, sons and daughter-in-law continually fail to offer assistance. She does receive help from other struggling mothers in the building and her unwed childless sister Lily. It’s when these women gather, in varying aggregations, that Lamont Stewart’s dialogue most resembles the fuel of a beloved modern-day sitcom. The men bear much blame for the dire conditions on display, yet the show’s ample comic relief takes place in their absence.

As with the funnier lines, even the most strident and overwrought exchanges flow with ease. Director Robin Witt controls the constant comings and goings of the large cast with matching fluidity. Whether taking the stage for an extended turn or popping in for a moment, the actors remain fully committed. Each performer seems perfectly cast. Among the standouts, Lori Myers as matriarch Maggie delivers a nuanced and believable take in the starring role, and shares a convincingly familial rapport with Katherine Banks, who fleshes out the more limited role of Lily. Ellie Reed is strong as remorseful but determined daughter Jenny who avoids turning into a heartless cutthroat like Isa, portrayed with icy precision by Amanda Powell. Curtis Jackson is stirring as contemptible Alec. And Maggie Cain manages humor as the wholly disrespected Granny, an immobile onlooker to all that transpires, when she isn’t shunted offstage by her younger kin who grew tired of her presence long before the first act.

This show is downright melodramatic and bittersweet in a nearly treacly way. The big payoff wins your approval for what otherwise may be societally objectionable with the ever-reliable doing-it-for-sick-child exemption. And the Morrisons indulge in borderline hysteria that could build to an irritating bore. This Griffin production pulls it all together and pulls it all off. (Raymond Rehayem)