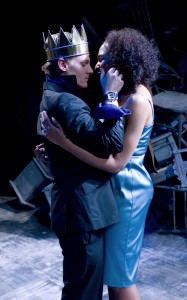 I’ve never considered Christopher Marlowe’s “Edward II” a “gay” play, but homocentric tendencies seem to be de rigueur for today’s directors approaching this sixteenth-century drama. I can certainly understand why. Here’s a play about a King who publicly rejects his queen, openly loves another man, and becomes so obsessed with this commoner that he frivolously bequeaths him titles and nobility (a big deal in those times and Elizabethan audiences would have known this) despite opposition from his court. Late filmmaker Derek Jarman also made a case for the “gay” “Edward II” with his 1991 cinematic sensation, probably the benchmark for queer interpretations, but that film was produced at the height of America’s ACT UP and Britain’s Outrage gay social activism, imbuing the piece with a socio-political resonance that Marlowe’s original never had. In other words, there’s more to this play than just gay, and a more balanced approach both addresses the homosexuality—as the concept exists today—implicit in Marlowe’s text, and more importantly illuminates the dangers of people in power struggling with personal desires.

There’s no question as to what outré director Sean Graney wants his “Edward II” at Chicago Shakespeare Theater to be about. Gaveston (the object of Edward’s affection) is played by a hunky African-American actor (La Shawn Banks) glammed-up (a fierce fur coat is particularly memorable) to remind me of the Harlem drag ball participants from “Paris is Burning.” When he and Jeffrey Carlson’s King are reunited for the first time, Edward literally leaps into the embrace of his lover’s muscular arms and vehemently wraps his legs around Gaveston’s torso like a bird of prey tightening his talons. After Gaveston has been disposed of and Edward has taken up with boy-toy Spencer (Erik Hellman, an intelligent actor who brings a nice gravitas to the role), they frolic in crisp, white linens and matching parasols as if auditioning for a Merchant-Ivory film. Alison Siple’s gorgeous parade of costumes (ornate gowns, smart trench coats, furs and codpieces) could rival the unveiling of any designer’s fall collection. As Edward, Carlson hits every emotion from childlike petulance to comatose grief, but his overall characterization is that of King as mincing monarch. As well, Carlson’s voice has a whiny musicality to it that stresses head over chest tones, and he tends to languish on open vowels. And if all that doesn’t scream queer loud enough for you, Lancaster’s slaughter elicits a “Faggot Tyrant” slander against the King.

This is conceptual theater from beginning to end yet despite my interpretive biases I was jolted and absorbed with Graney’s beautiful, provocative and unsettling revival. And unlike similar efforts with “King Lear” and “Titus Andronicus,” the spectacle never overwhelms the script but takes it to new heights (Marlowe’s shallow verse and lack of character depth are a boon to Graney’s approach here). The experience of watching this “Edward II” is a jolting one, and the promenade style that places audience members in and around the staging allows for the more memorable phenomenon of watching other audience members watching “Edward II.” Or not watching. During the play’s coup de grace, in which Edward is savagely tortured and murdered in one of the most disturbing death scenes you’ll ever see in the theater, one audience member I had been watching turned away, unable to witness the graphic violence. Now what director wouldn’t kill for that kind of response? (Fabrizio O. Almeida)