by Monica Westin
January 9, 2009Filed under: 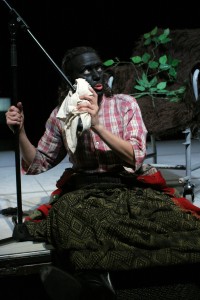 An epiphany. Elizabeth LeCompte’s daring adaptation, using conventions of blackface, of what was possibly Eugene O’Neill’s most controversial play to begin with, balances the Wooster Group’s spectacular aesthetic and fever pitch of the writing with delicate controlled performances on the brink of pure abstraction. The show is impeccably stylized at every level as it creates and destroys the legend/fantasy of Brutus Jones, running away from natives on an island he’s colonized and his own past as a Pullman porter and convicted criminal in America, stuck on island he can’t escape and that eventually annihilates him. Kate Valk’s obvious masquerade as Jones, in the makeup of minstrelry, which does nothing to disguise its artificiality, and throwing her voice disturbingly convincingly as a white fantasy of black masculinity, doesn’t let us forget for a moment that this kind of racial identification is a simulacrum and simultaneously a role that cannot be escaped. Artaud-like, the images of our own inherited stereotypes and our position as voyeurs into others’ horrors are thrown in the audience’s faces; in perhaps the most chilling moment of the show, Jones wakes up from a nightmare in the jungle and shrieks, “What are you looking at me for?” That Valk is utterly astonishing, even genius, comes as no surprise, but Scott Shepherd, the white British interlocutor for Jones’ monologues, who serves as s sort of voice of history or colonialism itself, provides a dynamic anchor and an uncanny contrast for Valk’s hysteric self-destruction. Technically just as brilliant, with a minimalist soundscape and stark, alienating visuals. (Monica Westin)