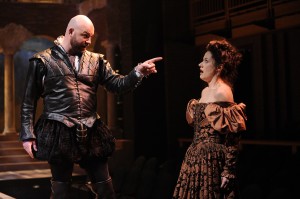 Imagine Shakespeare’s infamous battle of the sexes, minus the sexes, cross-fertilized with Cole Porter’s “Kiss Me, Kate,” minus the music. That is essentially what we get with director Josie Rourke’s re-imagining of “The Taming of the Shrew.”

Rourke clearly takes the one-dimensional view that the Bard’s purpose is merely to remind us that a good wife is a submissive wife, end of story. Doing the play means being a Shakespearian enabler in getting across his male-chauvinist message. As such, the decision is made to replace the often omitted play-within-a-play device of the original and transplant it with a modern-day framing scenario—complete with snappy dialogue supplied by playwright Neil LaBute—of a cast and crew putting on the play, at Chicago Shakespeare Theater, no less, and of objecting to the sexist message that they are asked to get across via the play.

Not that you blame them: if anyone were to direct an actual production of “Shrew” with as many masculine/feminine stereotypes as voiced by the man-hating lesbian director (Mary Beth Fisher) within the framing device, who just happens to be the jealous partner of the man-hating lesbian actress playing Katherina (Bianca Amato), mind you, anyone with the least amount of integrity would also object. The premise for producing it then, given in the framing device, is that the director is setting out to humiliate her partner because said partner is constantly flirtatious with other females, in this case the actress playing her sister Bianca. The irony, of course, is that the director wants complete control of her partner—just as Petruchio (Ian Bedford) wants control of Katherina—and since she cannot get it in real life, she will get it on stage with directorial decisions designed to humiliate the character of Katherina in ways that would make the Bard blush. 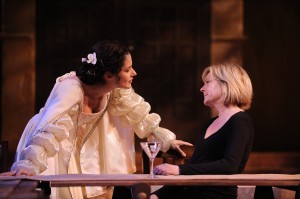 What is the overall effect of all of this? The worst of all possible worlds, unfortunately. The stereotype-filled “Shrew” that is staged within the frame is not a “Shrew” that would be staged on the Fox Arts Channel, if there were such a thing, let alone as a stand-alone by a respectable Shakespearian ensemble. By allowing that to stand, the play itself is done considerable damage. Some of the issues that are brought up about the play within the frame, however, do have merit and are witty, even if, in the long run, the contemporary diatribe ultimately clouds more than clarifies given that the lesbian couple never comes to any sort of relationship resolution whatsoever.

You could argue that the shock-and-awe ending here, which serves to sabotage Shakespeare’s own finale yet clearly indicates where all concerned are on the subject of the Bard’s intentions, simply nullifies all that has preceded it. The fascinating thing to do would have the lesbian couple end up the same way that Petruchio and Katherina end up, i.e., madly in love and “happily ever after” despite—or perhaps because—of all of the conflict that has preceded them.

Many of us, after all, view Katherina’s initial “shrew”-like behavior as a lack of love in her life, an inability or even unwillingness to love anyone around her (those early scenes where she is abusive to family members are key), including herself. By meeting Petruchio, a would-be husband who can match her abuse, the effect of her own is neutralized. Along the way, both discover that they are in love, and part of love is doing what someone else wants, not simply what you want. Her public speech of submissiveness at the end of the play is not so much that her spirit has been broken, so much as she has found herself; she is now a person capable of caring for another and being responsive to his needs, not only her own. That is something, unfortunately, that neither actress nor director in this production ever discover even about the characters, let alone themselves.  (Dennis Polkow)