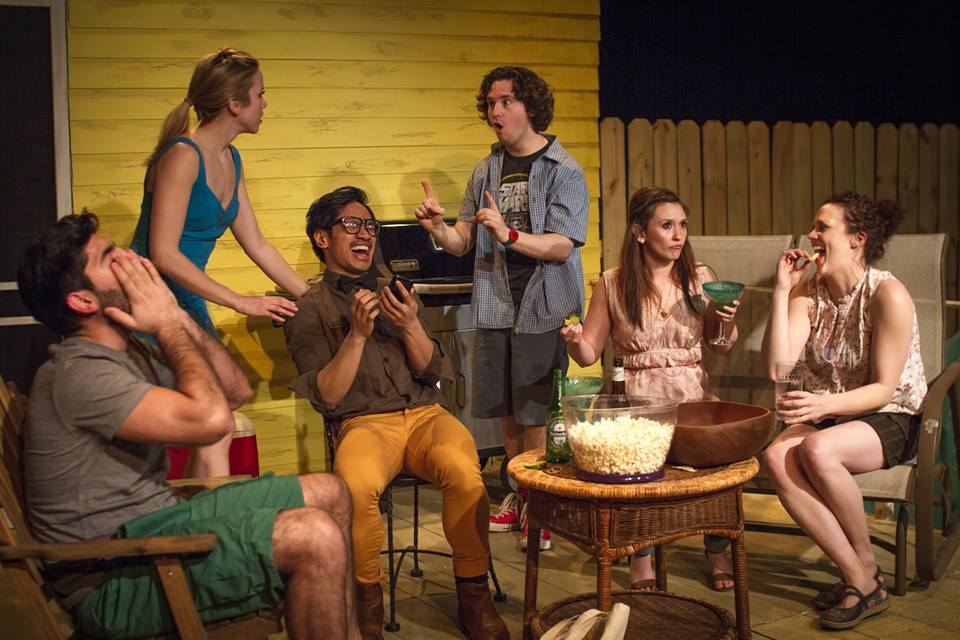 Even under ideal circumstances, party planning acts as a pressure cooker for our neuroses and insecurities. We’ll never measure up to our passive-aggressive and maddeningly successful friends. We’ll be forced into the death march of social interaction with people we aren’t sure we even like. And something’s bound to go wrong and ruin everything. What if that something were a cataclysmic global apocalypse? That’s the concept (and title) of The Ruckus’ new production of Matt Lyle’s “Barbecue Apocalypse.”

The play’s two acts straddle either side of the titular apocalypse, which is smartly kept to the background as the play’s characters re-evaluate their expectations and achievements in the wake of total catastrophe.

The first act starts out with under-achieving Deb (Allison Hendrix) and Mike (Kevin Lambert) planning a backyard get-together for their friends: yuppie/hipster power couple and Pinterest-analogue darlings Ash (Bryan Bosque) and Lulu (Jillian Rea), Reaganite alpha douche Win (Andrew L. Saenz), and his new dancer girlfriend Glory (Christine Vrem-Ydstie). Deb and Mike have only just started to internalize the expectations of adulthood and realize their anxieties about not measuring up.

As the guests filter in, the script starts to sag under the weight of fleshing out six characters in one forty-five-minute act. This leads to dialogue that’s both wryly observant (“I hate people who are good at things”) and clangingly tone deaf (“Her boobs are like two Astrodomes”).

Some of the characters turn into shrill caricatures for long stretches. Win, given the most room in the script to act out, suffers from some especially bad lines that stretch the credulity of his friendship with Mike. But when the script allows, he’s funnier toting around a sixer of Heineken and preaching Ayn Rand philosophies he hasn’t actually read. His Rockette-hopeful girlfriend Glory is smartly written, never as dumb (she has complex thoughts on taxation rates…) or as smart (…because she played an economist once) as anyone suspects.

It’s a frustratingly uneven first act, but at least the characters are distinct. The second act, on the other hand,  delivers a hilarious, tense, meaningful experience. “Barbecue Apocalypse,” fittingly enough, feels more relaxed and naturalistic after the world ends. Deb and Mike settle comfortably into the neo-hellscape, Ash and Lulu reconnect in part due to the death of social media, and Win… everyone’s cheerfully hoping he hasn’t cannibalized his new lady friend.

The better-rounded characters and a re-weighing of expectations would be nearly good enough on their own to redeem things. But the centerpiece of the second act is the real discovery, and the reason to absolutely go see it immediately. I won’t spoil anything, but the writing, acting and directing that takes place in the second act are a master class in creating palpable tension and confounding expectations. Every member of the cast does meaningful work, and Jon Patrick Penick is not just good but Holy Shit Good.

Tristan James (set), Cat Wilson (lighting), and Holly McCauley (props) do impressive work in making a snug studio space feel like a credible suburban backyard. The little touches—beer caps all over, crappy mismatched outdoor furniture, and a deck just nice enough to be proud about—create a convincing atmosphere both pre- and post-apocalypse.

Even with a spotty start, you’ll remember much more good than bad when the show’s over. And that’s all we could ever ask—for a party, a play, or the end of civilization as we know it. (John Carruthers)