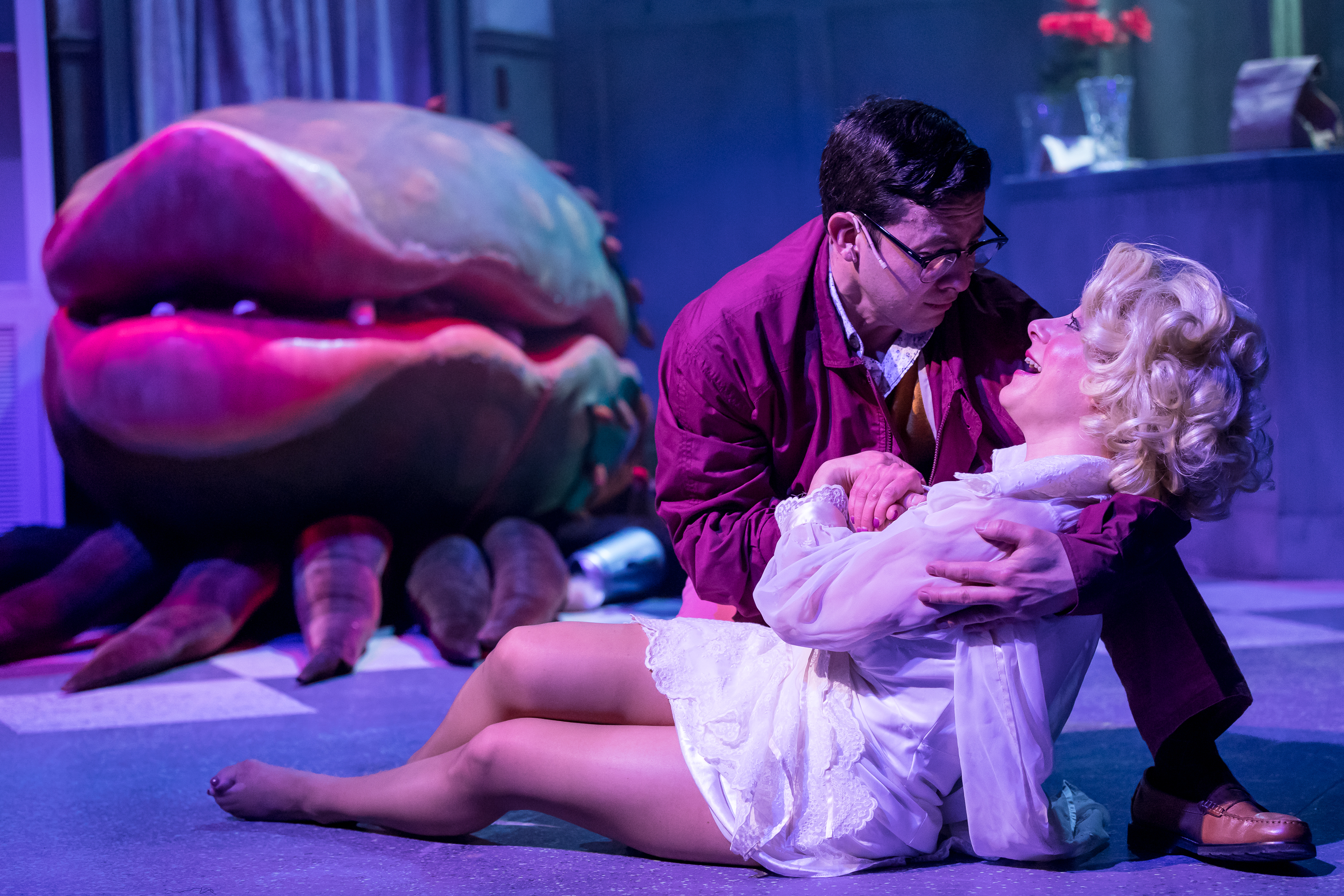 Let’s start at the curtain call. A very good place to start.

The “urchins,” the dentist, Mr. Mushnik, Audrey and Seymour have all given their bows to rapturous applause and standing ovations. And last, but certainly not least, are the plaudits for everyone’s favorite carnivorous plant: Audrey II, the “horror” of the classic horror-comedy musical “Little Shop of Horrors.”

But it’s not the massive plant puppet that we’re applauding. Here comes Jonah Winston (Audrey II’s voice), donned in a Vegas-ready green suit, followed by Sam Woods (Audrey II’s puppeteer) in a blood-red uniform with the number “2” cheekily embroidered on the front, ready to bring us home with an encore performance of “Mean Green Mother from Outer Space,” Audrey II’s grand-slam number from the film adaptation. Winston, making the stage his own in this triumphant performance, blows the roof off of the Mercury Theater and brings down the house in a way that nothing else in the previous two hours has come close to.

Mercury’s production of “Little Shop”—the third production of this classic Howard Ashman-Alan Menken musical that the Chicago area has seen in the past three years—does a fine job of emulating what has made this show an enduring musical theater classic. From the get-go, there are indications that director L. Walter Stearns’ production will lean more into the pulpy and absurd aspects of the show, itself a musical send-up of the 1960 Roger Corman B-movie. This absurdity is best captured by David Sajewich, whose comic antics are on full maniacal display as the sadistic and abusive dentist, Dr. Orin, as well as the much-desired role of “Everyone Else.”

But unlike the hypnotic allure of its strange and interesting plant, “Little Shop,” even with its self-aware humor and pastiche musical-comedy charm, comes off as a hard sell in 2019. Many of the “jokes” made at the expense of Orin physically abusing Audrey are cringeworthy. The clever premise of using sixties doo-wop and rock ‘n’ roll music to tell this story comes across dated and bland when white actors are assigned the leads (the “urchins,” played by Nicole Lambert, Adhana Reid and Shantel Cribbs, walk away with the show vocally).

And then there’s that devilish plant, Audrey II. Mercury’s puppets don’t deviate far from the designs you’re already familiar with, as long as this isn’t your first trip to Skid Row, though by the show’s end, as he’s wheeling around the floor, Audrey II is more like a gangrene Pac-Man. As I was leaving the theater, I wondered: what if Jonah Winston, donned in full green-suited regalia, was our Audrey II? Winston’s onstage charisma and vocal prowess carry far more character and villainy than any puppet could and it’d be a creative leap forward from the usual production choices associated with “Little Shop.”

That’s not the choice they went with, and that’s not the show I’m reviewing. But Winston’s curtain-call closer gave us a sweet taste of what could’ve been. Not unlike that mean green mother from outer space, it left me hungry for so much more. (Ben Kaye)