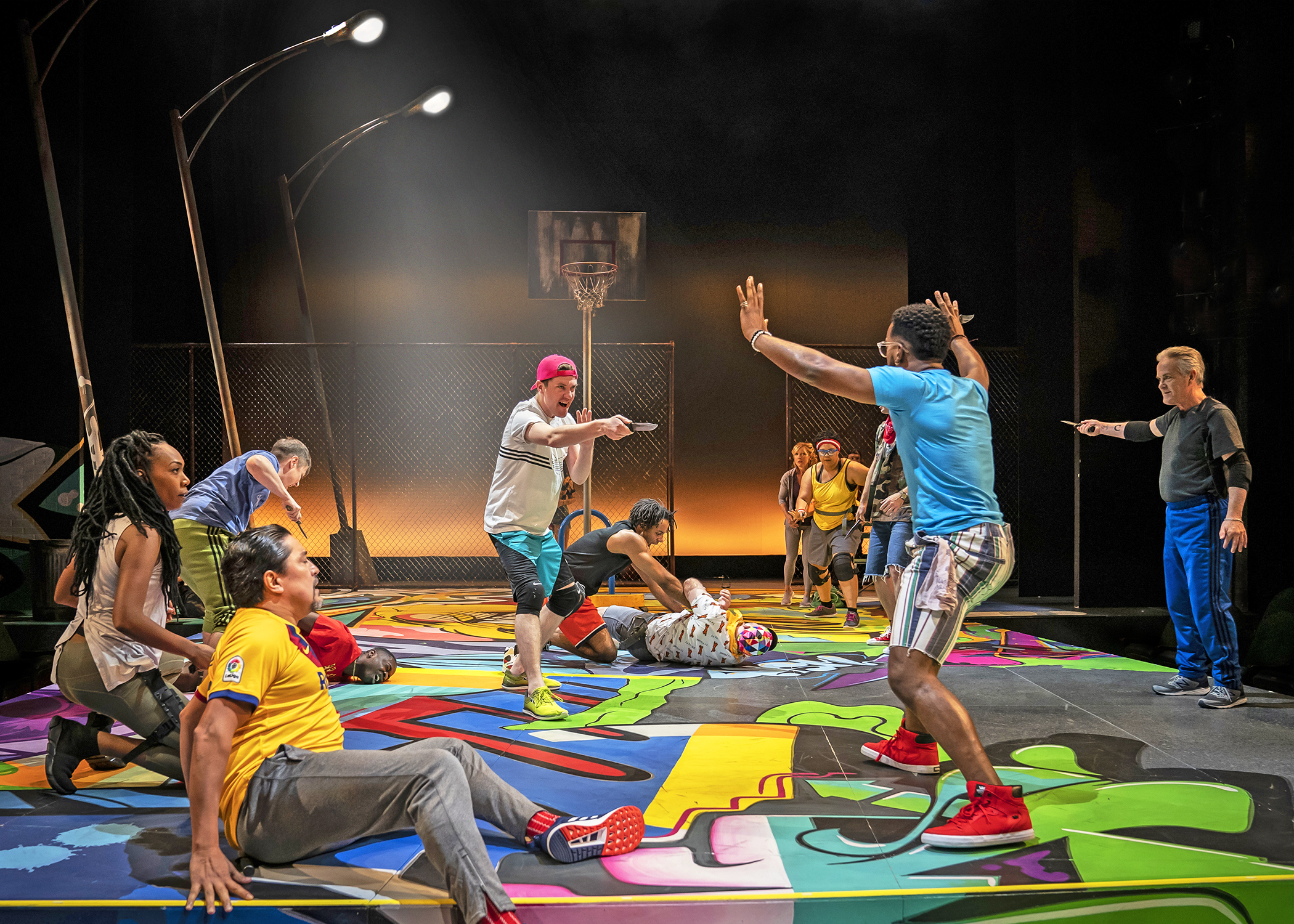 Sam Pearson and Cage Sebastian Pierre (center) with the cast of “Romeo and Juliet”/Photo: Liz Lauren

Chicago Shakespeare Theater offers up a unique and creative take on “Romeo and Juliet.” Set in a modern urban setting, this production explodes with color. The primary set design itself, a multi-pastel-colored basketball court, feels like something more at home in a Spike Lee Joint than on a Shakespearean stage. The diverse and talented cast matches this vision and appear as the perfect meld between two different eras trapped in a seemingly never ending cycle of violence and retribution. It is to artistic director Barbara Gaines’ credit that she did not simply divide the interracial ensemble into two families, black and white. Instead, she creates two beautiful but flawed families whose eternal conflict with one another is the true tragedy.

Anchoring the production are Edgar Miguel Sanchez (Romeo) and Brittany Bellizeare (Juliet). The star-crossed lovers have real chemistry, which allows the audience to care deeply about their fate. They capture the essence of youth and the raw feeling of first love. The true strength of this production is in the supporting cast, with Darlene Hope especially impressive as the Friar. Her presence and timely eye-rolls serve as the production’s moral center.

The production is at its best leading up to Romeo and Juliet’s first meeting: a beautifully choreographed summer barbeque that simmers with youth’s poignant tang of sex and fury. Also impressive is the easy camaraderie of Romeo’s men, whose boisterous antics play off Mercutio’s nearly psychopathic tendencies (played to near-perfection by Nate Burger).

Lying in wait, of course, is the Capulet family, whose patriarch (James Newcomb) has the emotional instability often associated with age and alcoholism. Their inevitable collision leads to a bloody conflict whose real-world consequences include parents grieving the loss of their children, an image that unfortunately resonates here in Chicago. Maybe this is why I found the closing moments of the play, where the warring parties are so moved by the final plight of Romeo and Juliet that they throw down their weapons, so incredibly moving. Sadly, it also felt unreal, like something out of a fairy tale or an unanswered prayer. (Noel Schecter)