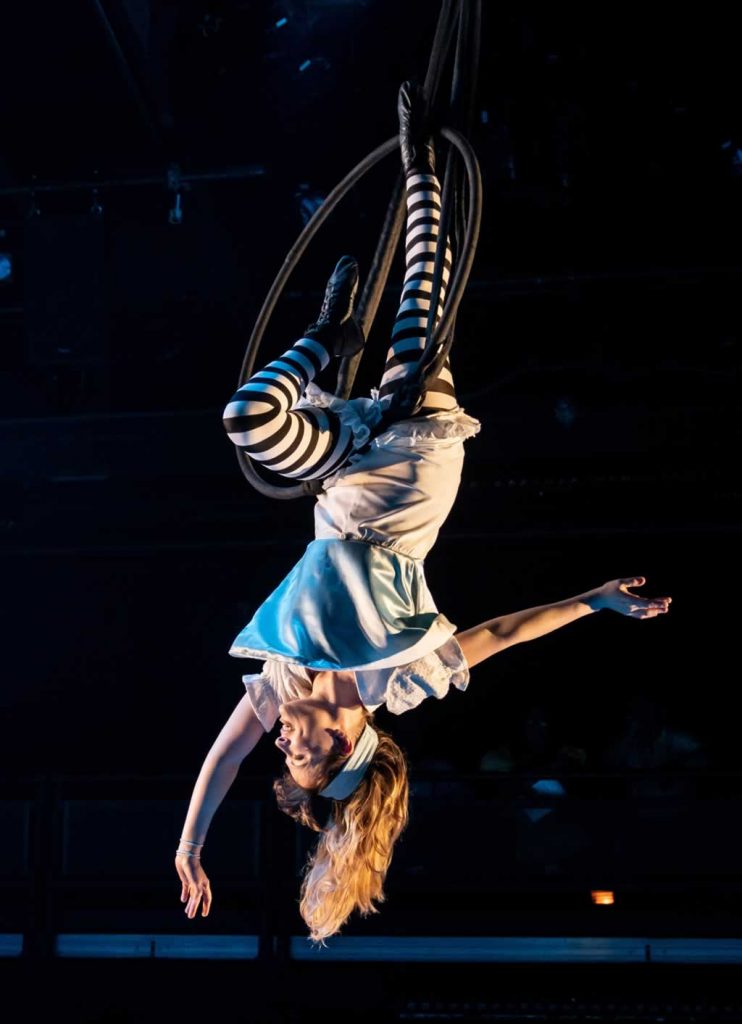 “Curiouser and curiouser” is an apt description of the last two years of human history. So it’s a good time for a revival of Lookingglass Theatre Company’s popular “Lookingglass Alice,” a witty, joyful and circus-like adaptation of Lewis Carroll’s “Alice in Wonderland” and “Through the Looking Glass.” As a society, we’ve been down a rabbit hole. It’s dark, occasionally scary and full of rude characters spouting nonsense. “Lookingglass Alice” reveals the beauty in change and unexpected lessons, while acknowledging their pain. 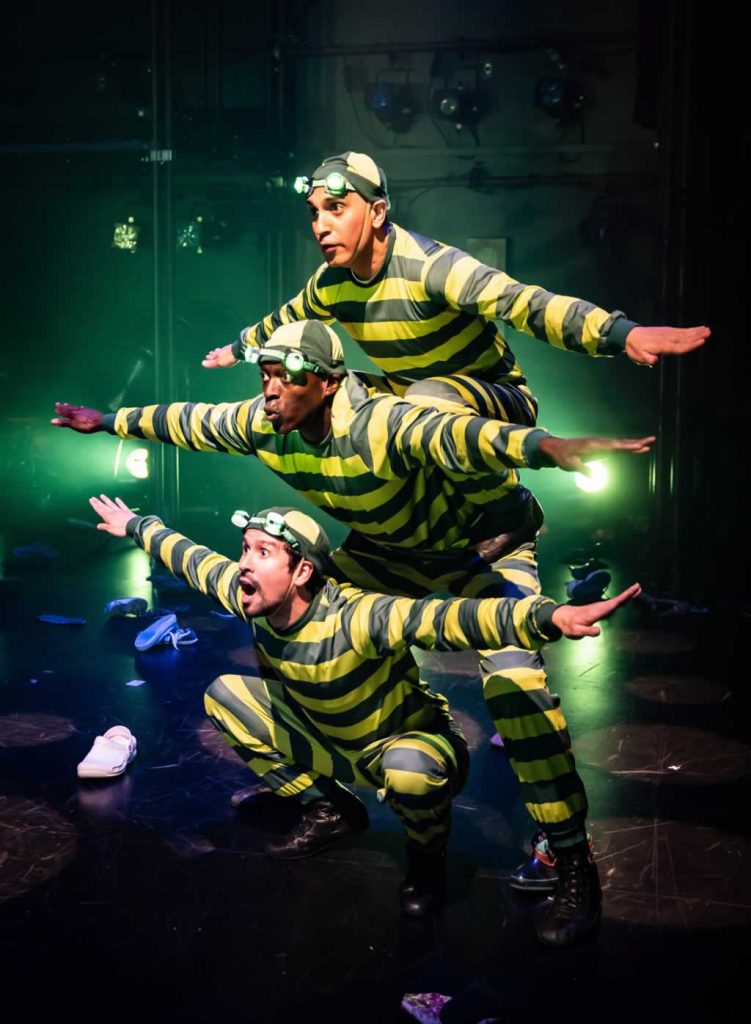 This “Alice” was adapted and directed by ensemble member David Catlin and first produced in 2005. With Lindsey Noel Whiting and Molly Hernandez sharing the title role (in different performances), the show uses acrobatics—actors standing on each other’s shoulders, walking on stilts, swinging on ropes, and even, incredibly, hanging upside down from the top of the theater—to illustrate the fantastical story. The caterpillar, for instance, is performed by three actors in green-and-yellow-striped pajamas with shoes on their hands, climbing over each other and walking in an undulating fashion that mimics a caterpillar walking along a twig. The haughty and hot-tempered Red Queen (Kareem Bandealy) first appears on top of a red dress hiding a two-story wheeled platform, with puppet legs at the bottom. The mad tea party emerges out of a picnic basket—with the Mad Hatter, the March Hare, the Dormouse and multiple folding chairs coming up through a trap door. Mara Blumenfeld’s clever costumes bring out the craziness of the story—the Red Queen’s towering, bouncing crown, the March Hare’s purple fuzzy leggings— without interfering with the need for movement. Long, waving, white strips of fabric, moved by performers in the wings, represent a pool of tears.

The audience in the performance I saw was filled with children, who adored it, clapping and shouting and mostly-almost-never leaving to go to the washroom. But with its wordplay and satire, “Alice” has always also been a story for adults, and this adaptation is tinged with melancholy, mourning the need for children to grow up while acknowledging that it needs to happen. Though it uses elements of both books, the Catlin adaption focuses on the second, with Alice moving over a chessboard on her way from pawn to queen. She wants to triumph in Wonderland, not just survive its madness, and the Cheshire Cat (Adeoye) and the White Knight help her in their own strange ways.

Samuel Taylor plays both the White Knight and Charles Dodgson, the Oxford mathematician who in real life would tell stories to Alice Liddell and the other young daughters of Christ Church dean Henry Liddell. (Carroll was Dodgson’s pen name.) Dodgson laments that Alice still “haunts” him, and while he advises and encourages her, he also sees her leaving. 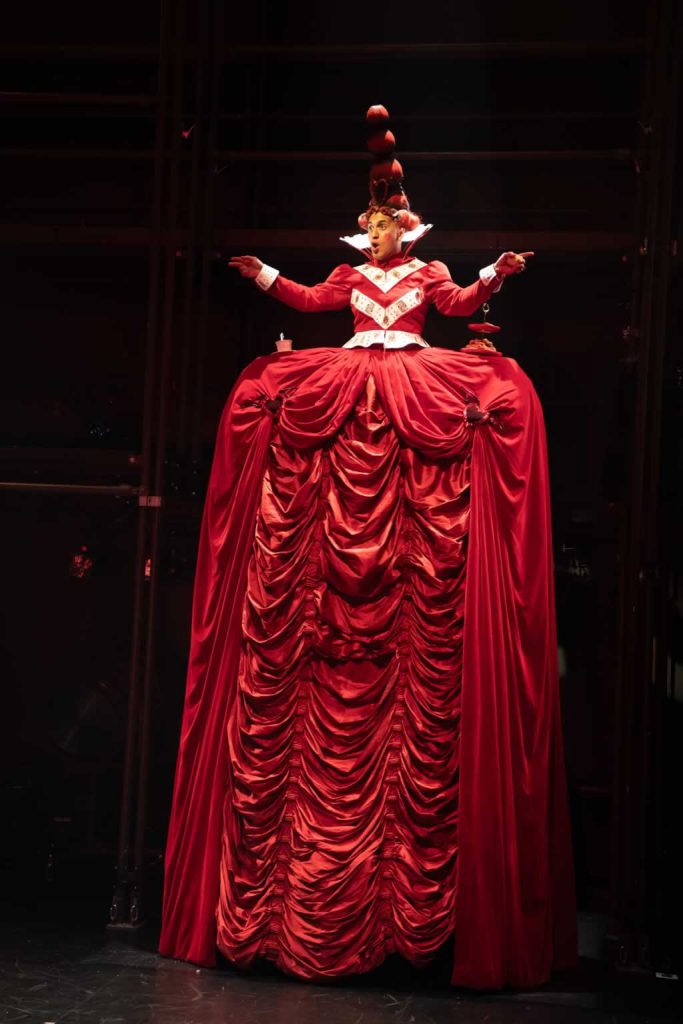 The cast of this production, playing multiple parts, is excellent. Adeoye is the epitome of muscular cool as a sunglasses-wearing Cheshire Cat; Michel Rodriguez Cintra, who plays the White Rabbit and the Dormouse, is reminiscent of Buster Keaton, with a rubber face and body, slipping through the middles of folding chairs. Bandealy is an hilariously camp Red Queen and self-regarding Humpty Dumpty, while Whiting (who appeared in the press performance) was a cheerful, empathetic Alice, skipping the solemnity given the character in other interpretations. The cast standout is Taylor, who plays Dodgson as a buttoned-up Victorian and the White Knight as a sorrowful and silly clown. Taylor can somehow wring pathos out of a character riding a unicycle and designing elaborate schemes for getting over gates. Not all of the “Alice” characters are pure nonsense—the White Knight is an inventor and a poet, longing to serve a damsel who keeps moving on to the next square.