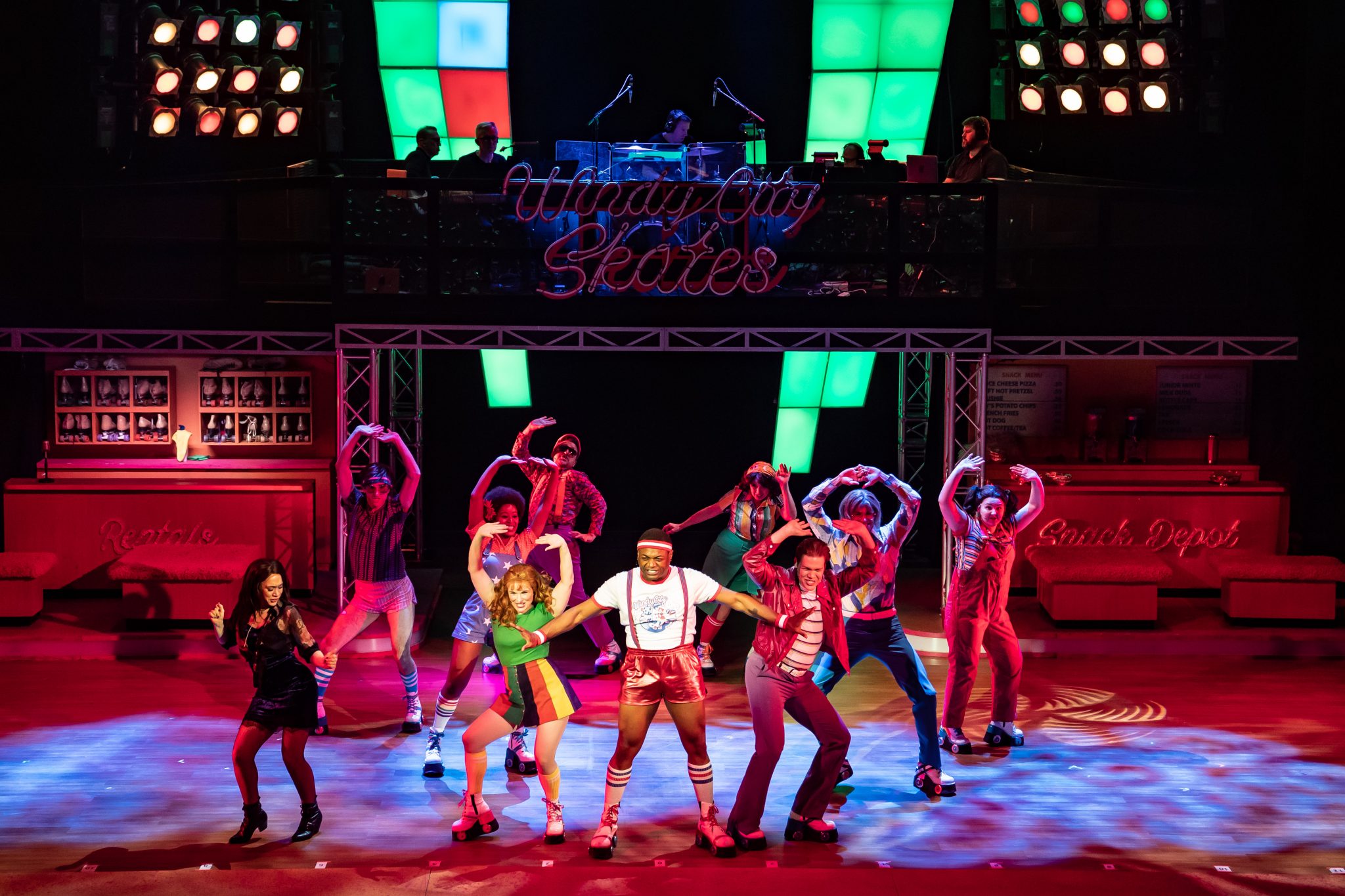 Like gray hair and being utterly baffled by new technology, nostalgia bristles with age, which is why there’s a robust musical theater tradition of trafficking in the olden days of the always-aging target audience. When I was young, the culture was awash in works like “Grease” that harkened back to the youth of my parents in the fifties, but today my adolescent years are having their own moment. “Skates,” the creation of Chicago native Christine Rea (book and lyrics) and her husband Rick Briskin (music and lyrics), in its world premiere at the freshly restored Studebaker Theater, has its heart in the seventies, at a South Side roller rink called Windy City Skates.

“Skates” tells the story of Jacqueline Miller, a pop star enjoying her first hit song and national tour in 1994 and yet unhappy in life and love. So she yearns for the days when she was twelve, spending her free time at the roller rink and yearning for her first crush. Told in flashbacks where her 1994 being hovers around her 1977 self, in a “ghost of roller rinks past” way, as her return home to the rink part of her tour approaches, you can probably imagine where it all goes, since we’ve seen more nuanced versions of this story so many times before.

Diana DeGarmo, who came to fame on “American Idol,” plays the nineties version of Jacqueline. She’s a powerful performer whose charisma too often takes a back seat to her twelve-year-old self, played capably by Emma Lord, but as a character who in no way foreshadows the charisma of her future stardom. The 1994 framing material is more grounded in its writing but still telegraphs beats drawn from the cliché canon, especially in the limited role of Blake, Miller’s love interest (and DeGarmo’s real-life husband, Ace Young), who gets to shine on the saxophone while playing the cad, a role he’s forced to amplify in his seventies manifestation as the bully Russ Reiner.

Jackie’s mom and dad, played by Cory Goodrich and Jason Richards, have standout moments and show off some fine vocal capabilities. The choreography, set on faux roller skates, has terrific moments but could have so many more, since it’s hard to beat disco dancing at the roller rink if you want to evoke the seventies.

With the exception of the heartfelt “I’m Crushing On You,” the songs are catchy if not hit material, but give the creators credit for composing original material. There’s usually safety in the jukebox for these dances down memory lane, such as in “Million Dollar Quartet,” “Jersey Boys” and dozens of other shows, but there’s none of that here.

Since the beginning, the nature of these exercises in selective memory tends to be camp, with over-the-top drama and over-emoted dialogue that by its very nature references the raw material of pop culture of the time it’s paying homage to—think of the plotlines and dialogue of hit TV shows like “Happy Days” and “Three’s Company.” “Skates” does a fine job of recalling the phrases and slang of the seventies —remember, for example, when an attractive boy or girl was a “fox”—an important element when conjuring the allure of reminiscence. But while the ticking clock ensures a lasting place for nostalgia in the hearts and wallets of theatergoers, this work is born too late to be relevant in a time when “A Strange Loop,” “Paradise Square” and “SIX” are being celebrated in American musicals. (The exception, of course, being that other vehicle of sentimentality, the classic movie or TV show adapted for the stage.)

Like mindlessly binging on old TV shows from the seventies, it makes for a perfectly pleasant and forgettable two hours and change. Call it comfort theater.