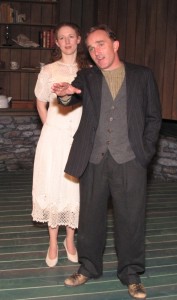 Although best known as the Academy Award-winning 1952 John Ford film with John Wayne and Maureen O’Hara that featured the Irish countryside shot in Technicolor as virtually a major character, “The Quiet Man” began life as a 1933 Saturday Evening Post piece by Irish author Maurice Walsh.  The character of onetime sparring partner Shawn Kelvin, who had gone to the States to make his fortune and returned home to marry Ellen O’Grady despite her boisterous brother Big Liam—whom Kelvin would have to face in a climactic pugilistic showdown to win her dowry—fired up Ford’s imagination.  Ford bought the film rights to the story from Walsh in 1936 but meanwhile Walsh had expanded his tale into a series of short stories called “Green Rushes” and had even restored the lead character’s name to the actual person that the original story had been based on, Paddy Bawn Enright, while Ellen and Liam O’Grady became Ellen Roe and Red Will O’Danaher.  In that expanded and more overtly political telling, Enright was not only a onetime boxer but an Irish freedom fighter during the Irish War of Independence.

Ford had handshake contracts with both Wayne and O’Hara to make the film as early as 1944, but financing remained an obstacle as every studio in Hollywood rejected it as a “silly little Irish story.” Ford persisted, and the film was finally made at Republic Studios seven years later.  By then the story had been expanded and changed at Ford’s commission by Welsh novelist Richard Llewellyn and scriptwriter and onetime New York Times film critic Frank Stanley Nugent and the movie took an apolitical tone and became a lighthearted romantic romp, sort of an Irish vs. American “Romeo and Juliet” meets “The Taming of the Shrew.”  The result became one of the most beloved films of all time, a St. Patrick’s Day broadcast staple to this day even if the idealized Ireland portrayed in the film had little to do with “Green Rushes,” nor with reality in general.

Of course, you don’t mess with a classic—Broadway disastrously tried back in 1961 with a musical adaptation of the film version called “Donnybrook!”—but what had never been tried was attempting to go back to the source material itself to mine stage opportunities.  That is exactly what Frank Mahon and Milissa Pacelli have done with their new play, “The Quiet Man Tales,” which received its world-premiere performance last Sunday afternoon at the Chicago Theatre Downstairs.  Wisely, the show makes no attempt whatsoever to reconstitute the film, aside from milking its popularity in the show’s title and even cleverly securing an enthusiastic endorsement from its co-star, now 88-year old Maureen O’Hara—but covertly restores the political ethos of Walsh’s novella, right down to a key character being executed as a traitor early on.

The first act, in fact, is so much darker and different than the familiar movie that some audience members were wondering aloud during the break where any element of the beloved film might be.  And the brogues were sometimes inconsistent enough that being able to tell the Scots from the Irish became a challenge.  No fear: focus emerges when Paddy Baun (Ron Rains) marries Ellen O’Danaher (Cassandra Bissell) at the beginning of Act Two, part of a ploy on the part of her brother Red Will O’Danaher (Bret Tuomi) to marry her off because a younger woman he has proposed to will not even consider his offer with two women living in the same house.  When Will is spurned despite Ellen’s departure from his house, Will takes it out on Paddy Baun, his new mild-mannered brother-in-law who is considerably smaller than Will, and who has already killed three men in battle, two in hand-to-hand combat, and who wants simply to settle down quietly and thus attempts to endure Will’s teasing and bullying with indifference as he continues to be put off by Will in securing Ellen’s dowry.  Ellen takes this for cowardice, and says as much, and that she doesn’t want their now-expected child to grow up having a weakling for a father.  The inevitable showdown indeed takes place, right on stage, but not the cartoonish gag-filled brawl of the film: an ugly, no-holds barred struggle between two very ordinary guys, both defending their honor, such as it is, and each giving it all they have.

Having been a lifelong fan of the film—back in 1991 I even had the enormous good luck to attend a screening of it alongside of interviewing co-star O’Hara while she was making “Only the Lonely” here in Chicago—it is difficult to assess what the reaction of those who do not know the film will be to this production, but things are so refreshingly different and filled out that I suspect those coming to this story fresh will be moved by these tales of ordinary people rising to the occasion and doing extraordinary things, whether it’s throwing out a national bully or standing up to a local bully.  (Dennis Polkow)