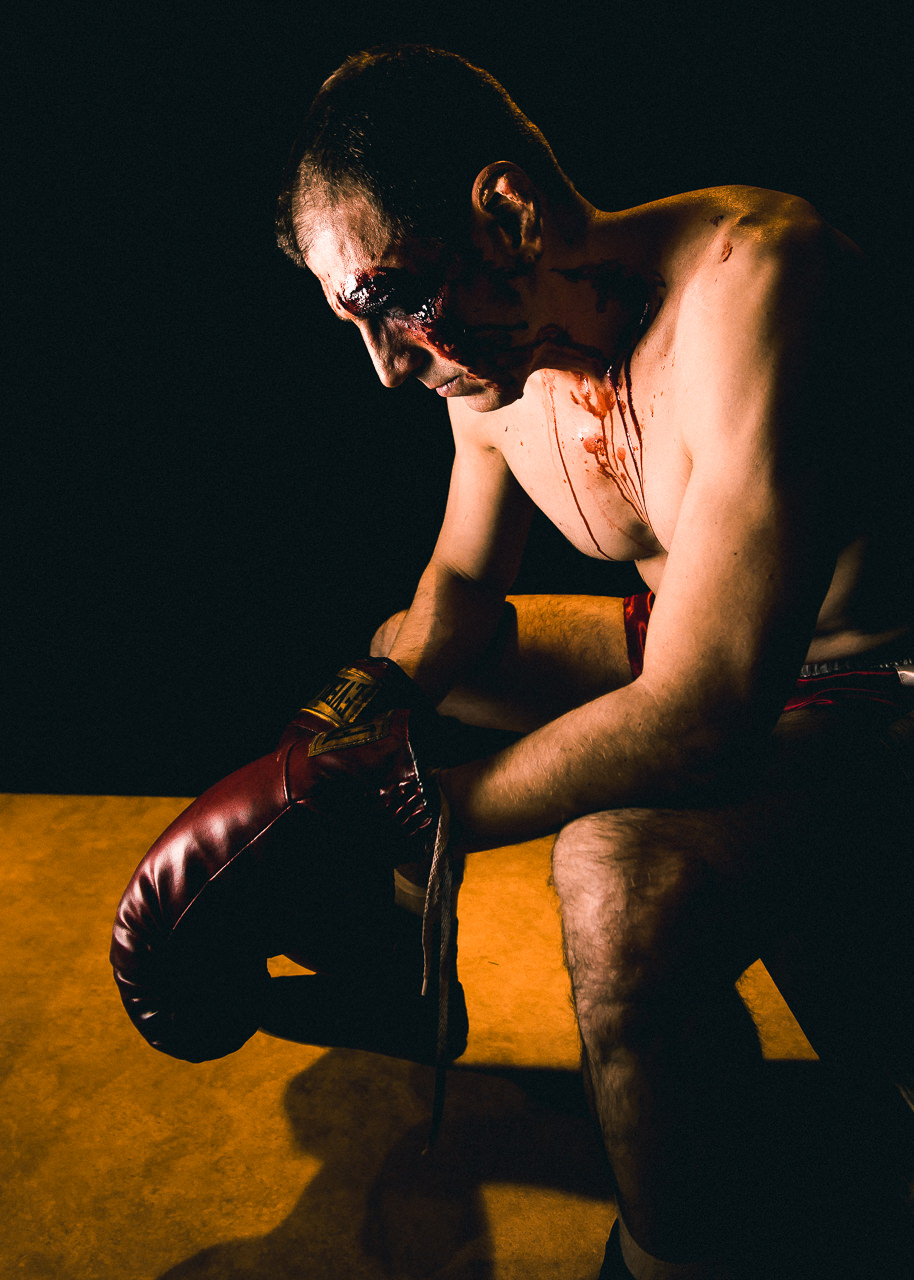 Drama is just another word for conflict, which means that the fight game, with its savage but rule-bound aggression, is a natural subject for theater. And the ruthless, winner-take-all nature of the sport also makes it a recurring metaphor for capitalism, a shorthand way of depicting the shadow side of the American Dream.

All of which helps explain the enduring popularity and relevance of “Requiem for a Heavyweight,” Rod Serling’s noirish melodrama about a washed-up pug facing an uncertain future, now at The Artistic Home in an engaging but uneven and overstuffed production.

Originating as a 1956 live television production starring Jack Palance, the work morphed into a feature film with Anthony Quinn in 1962, as well as a Broadway production in the mid-eighties, starring John Lithgow. Director John Mossman’s mounting, staged in the round with viewers surrounding designer Kevin Hagan’s sparse but effective ring-like set, relies mostly on the mid-eighties script, augmented by touches from the earlier iterations. The tale of battered, worn-out Mountain McClintock, trying to find some scrap of dignity in a seedy and uncaring world, still packs a punch. But by going with the padded Broadway version, rather than the tighter television script or movie screenplay, Mossman and his talented cast and crew deliver less than a knockout.

It begins beautifully, with a rhythmically percussive boxing pantomime combining stylized beatdown, war dance and factory assembly line, as new talent replaces old, only to run the punishing gauntlet themselves. We learn that Mountain, once the world’s fifth-ranked heavyweight, has lost his last bout. One more punch could leave him blind, declares the jaded doctor (Mike Rogalski), who, at this point in his career, feels less like a physician than “a guy who grades meat in a packing plant.” It’s bad news both for the fighter and his manager, Maish, who has, unbeknownst to Mountain, wagered against him. Maish has lost everything because the overmatched Mountain lasted more than four rounds, failing even to lose successfully. The bad bet means that Maish is in debt to the mob, and only the used-up and betrayed Mountain can save Maish from his own greed, at the cost of Mountain’s pride.

“What did I do wrong?” asks the simple but decent fighter. “You aged,” sighs the worldly-wise manager.

The themes of blindness and, well, meatness structure the play, as Mountain refuses to see Maish’s duplicity and his own abuse at the hands of a system that drains athletes and leaves them with nothing but crippling injuries and endlessly repeated tales of matches past.

Mark Pracht is outstanding as Mountain, the shambling has-been whose scars and cauliflower ears mask deeper damage to his confidence and self-esteem. But Patrick Thornton can’t get a grip on the kvetchy, guilt-tripping irony in the character of Maish Resnick. His interactions with Army (Todd Wojcik), Mountain’s trainer and the play’s finger-wagging conscience, and the sleazy operators (including John LaFlamboy and Reid Coker, both near-perfect as bottom-feeding promoters) who populate this mean-streets milieu often seem based more on old boxing-film clichés than real life. Serling’s characters are painted with broad strokes, and the emotions and effects evoked here are for the most part not subtle ones. Such an overheated script calls for a cool approach, and many a scene here could profitably be toned down. The play’s best moments involve the romantic subplot between Mountain and Grace (delicately played by Annie Hogan), the demure, middle-class employment counselor who senses the integrity and vulnerability beneath the fighter’s lumps and bruises. The scenes between the budding lovers are nicely paced, and possess an appealingly unsticky sweetness.

The battle between Maish and Grace for Mountain’s soul ends in a thoughtful, non-Hollywood way, but it takes too long to get there, with a plodding and repetitive second act that could easily shed fifteen minutes. One painless cut would be the role of Golda (Laura Coleman), a tough-talkin’ prostitute whose only function is to add female energy to a testosterone-laden show.

But for all its excesses, this is worth seeing and not just for the gritty atmospherics and chemistry between Pracht and Hogan. While “Requiem for a Heavyweight” is as pure a product of the fifties as tail fins or poodle skirts, it speaks to today. In a dog-eat-dog world, Maish’s smooth line and bogus self-assurance comfort Mountain, the over-the-hill boxer who still answers to “Kid.” By treating Maish as a father figure and accepting his manipulations, Mountain prolongs his childhood and avoids the angst that comes with standing on one’s own two feet. “Requiem” reminds us that, whether dealing with a two-timing manager or a lying demagogue and swamp-like system, freedom starts with the resolution to grow up and see things as they are. (Hugh Iglarsh)