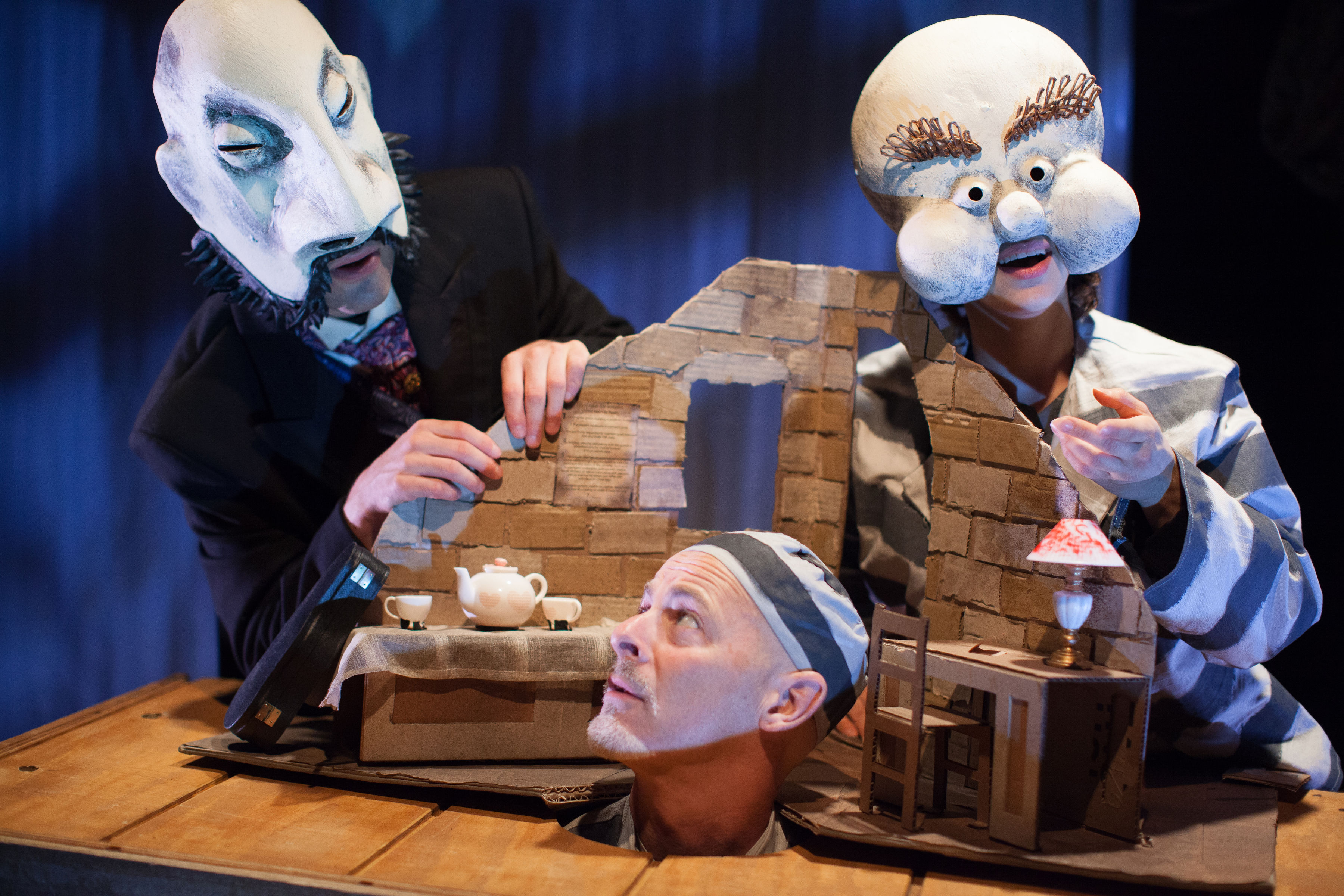 You’re invited to a brilliant, impeccable and weird event at Wicker Park’s Chopin Theatre. As adapted, directed and performed by Michael Brown, Vladimir Nabokov’s 1935 novel “Invitation to a Beheading” has never been more ominous or more captivating. From the director’s opening-night introduction to the curtain call, I was drawn into the surreal, dreamlike (or nightmarish) world of Cincinnatus, a prisoner condemned to death but not informed of when his execution will happen.

Cincinnatus struggles with the uncertainty around his execution. He distracts himself from his looming demise by reminiscing about happier times, tolerating the presence of his fellow inmate, Pierre, while delaying the completion of his writings. This resonates with how we distract ourselves from the inevitability of death, reasoning that we have more time, ignoring unfinished projects and creative possibilities. Cincinnatus writes but allows constant diversions. Mirroring Cincinnatus, we tend to value diversion and distraction, letting the fear of ending stop us from beginning.

Although the story of Cincinnatus is the journey of one man, the immersive performance is is divided among three cast members (Noah Appelbaum, Michael Brown and Claire Saxe). The seamlessness of the blocking and physical comedy keeps the audience in the world of the play without it feeling false or rehearsed. The versatility of the cast presents itself best through Brown’s Cincinnatus and Claire Saxe’s Pierre. Brown’s connection to the character and source material is palpable, raising questions about the importance of personal insight and how we should question any and all of life’s preconceptions. Saxe’s Pierre is the ideal foil to Brown, representing the hypocrisy and pretense that Cincinnatus cannot abide. A false prophet in prisoner’s clothing, Pierre promises salvation while chastising Cincinnatus for not being as remarkable (or physically fit) as him.

Developed puppetry and mask work (Mike Oleon) add to the flexibility of the actors and the story. The caricatures and their deliberate exaggeration lean into the surreality of the plot without becoming a crutch for humor or energy, which the play provides plenty of. The combination of the dungeon-like set (Jackie Penrod) and smooth blocking consistently creates engaging compositions, which are often complemented by the lighting choices (Rachel Levy) and occasional special effects. Exciting choices were also made in costuming (Frances Maggio) and sound effects (Corey Smith). Costumes mirror the atmosphere of specific scenes. Prison uniforms with unfinished, uneven black lines mimic how the story itself is unfinished and unorthodox. The executioner is dressed in a French Revolution ensemble, a reference to the many open-invitation beheadings of the past. The sound effects are equally fitting, with a menacing score filling the background of scenes and distinct sounds made by members of the cast while onstage, a choice used for comedic effect and sometimes pure unease.

A fantastic fable and a surreal story, “Invitation to a Beheading” prompts deep belly-laughs and even deeper introspection. The craftsmanship brought to this story is unmissable. The performance doesn’t hide any of its “stage magic,” it presents itself before us. Yet, the brain is somehow still unable to believe it. This is congruent with the theme of death, which we logically understand but still terrifies us. This fear of what we don’t know consumes us. We blame our mortality or lack of control for our shortcomings and bemoan our inability to control our own story. “Invitation to a Beheading” embodies the idea that we are our own obstacles, our own executioners. But if we question and scrutinize everything we are told then we can shape our own reality and become free from the fear and isolation that control us. (Hayley Osborn)