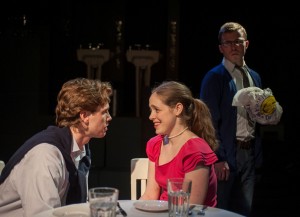 Late in Neil LaBute’s “In The Company of Men,” the most deplorable character I’ve ever seen in a domestic drama relaxedly watches “Seinfeld” after confessing to horrid acts of objectification and betrayal against a woman in the name of the masculine drive to dominate. “Seinfeld” is the head honcho of cruelty on television, going so far as to end its nine seasons with a courtroom condemnation of its characters’ collectively awful behavior. Punished or not, we loved every cruel nickname, prank and misadventure, regardless of the emotional casualties along the way.

There’s a lot of bullying on TV. The little glass-plastic-and-metal box makes it easier for us to keep our distance and observe it almost zoologically—like how you might laugh at your clever kitten hunting mice. The same actually goes for many classic plays. The heightened language and our perception of the fifteenth and sixteenth centuries as being a less enlightened time-period is what gives Leonato the right-of-way to wish his beautiful daughter Hero would die for having sex before marriage, despite her own adamant and truthful protestations to the contrary. That’s from Shakespeare’s funniest and warmest comedy, “Much Ado About Nothing.”

Neil LaBute’s body of work evokes cruelty in disturbing ways; sometimes terrifically enjoyable, like in “The Shape of Things” or “This Is How It Goes,” and sometimes less so, like in “In A Forest, Dark and Deep” or “In The Company of Men,” receiving a world premiere in a revised form at Profiles Theatre. But shouldn’t some plays put the dregs of society on a pedestal?  Not as an affirmation of their behavior, but a clear vantage with which to observe it? Absolutely. And at his best, LaBute has a proven skill for that. Playwrights like Leslye Headland (whose “Bachelorette” was at Profiles in 2012) too have a masterful grasp on just why we humans can be so mean to one another.

The adult bullying of a deaf woman by two businessmen in their late-twenties, recently spurned by romantic partners, though, in “In The Company of Men,” is forced and never wholly believable. Most people know the play from the 1997 film starring Aaron Eckhart, but it existed as a stage work prior to that and prior to LaBute’s explosive success as a playwright. The bombastic scheming here, concocted in a “How To Succeed In Business Without Really Trying”-style washroom (Thad Hallstein’s set is sharp, strong and attractive) within the first ten minutes, comes across as the excited controversy of a playwright in his early days.

What’s also perceivable in Rick Snyder’s smooth production that’s faded away from LaBute’s later body of work is a sneaking sense of optimism. Dreadful though the main character, the aptly-named Chad, may be, he is presented as an exception to humanity’s rule. The playwright is criticizing the character’s devilish rationale in presenting him as a philosophizing cartoon. Why do it? “Because I can,” says Chad (Jordan Brown with luscious hair, performing the role exactly as it should be played). He has “a hunger for the hurt,” like a velociraptor with eyes bigger than his stomach. The masked antagonists of many of LaBute’s later works provoke rage because their oft-consistent world views paint them as being part of  some sort of silent majority. Everybody thinks this way; they just don’t say it out loud. With “In The Company of Men,” LaBute allows the audience to judge his characters more than he judges them.

The conceit—that two men would find and ruin the most vulnerable, kind and generous woman they can to let off steam—is gaudy and undone by the fact that this woman really is as saintly as their perverted fantasy of her. Jessica Honor Carleton’s Christine has nary an unlikable moment, so the audience relates to her no more than they do to her jerky aggressor. A perfect collaboration between playwright, production and performer though is Brennan Roche’s Howard. Until his final monologue, much too poetic to properly conclude the preceding tortures, every moment Roche is onstage, the audience feels for him on some deeper level. His performance is the best part of a clanky play that nonetheless offers intriguing insights into where LaBute began. (Johnny Oleksinski)