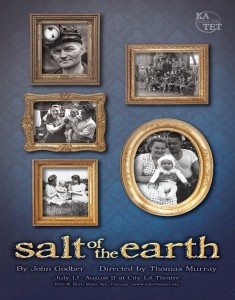 Even without the knowledge that writer John Godber’s family history inspired several of the characters in “Salt of the Earth,” Godber’s play very clearly comes from deep personal involvement with the consequences of technological progress and generational discontinuity. Mired in the provincial environment of the Yorkshire mining community of the mid-twentieth century, the only child (Kevin Lambert) of May (Kathryn Bartholomew) and Harry (Rob Glidden) goes off to university to better himself, as any loving parents would want. And while May and Harry love their son, Godber and director Thomas Murray make painfully clear that the advances which come with an education and experience they never had are perhaps unbridgeable.

As powerfully as Godber presents the raw emotions involved, the play suffers from a certain schizophrenia regarding the tragedies it wishes to depict. The first major event of the play leaves one of the central characters dead, an event which comes to define the others’ lives but which is left largely unanalyzed for most of the play. Furthermore, in the background of the family drama lies the looming reality of mine closures; implied to be the central theme, this inexorable dismantling of an entire way of life is in fact only glanced at. Those looking for a tight plot with well-defined goals should look elsewhere, but it’s still a powerful and wrenchingly honest portrayal of the strain that progress and change put on those whom we call the “salt of the earth.” (Rob Underwood)